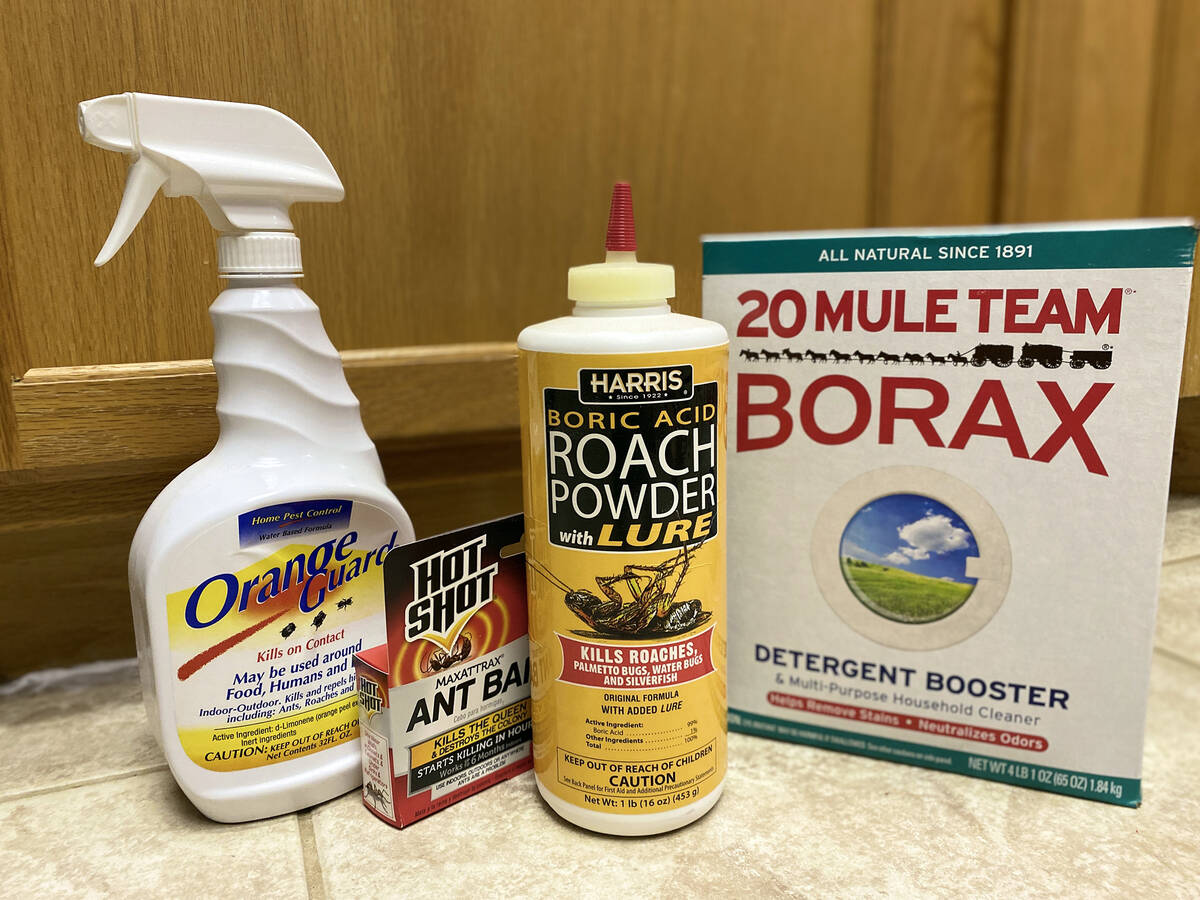 (Norma Vally) A variety of products, including those with sodium tetraborate decahydrate, aka Borax, are effective at killing ants. 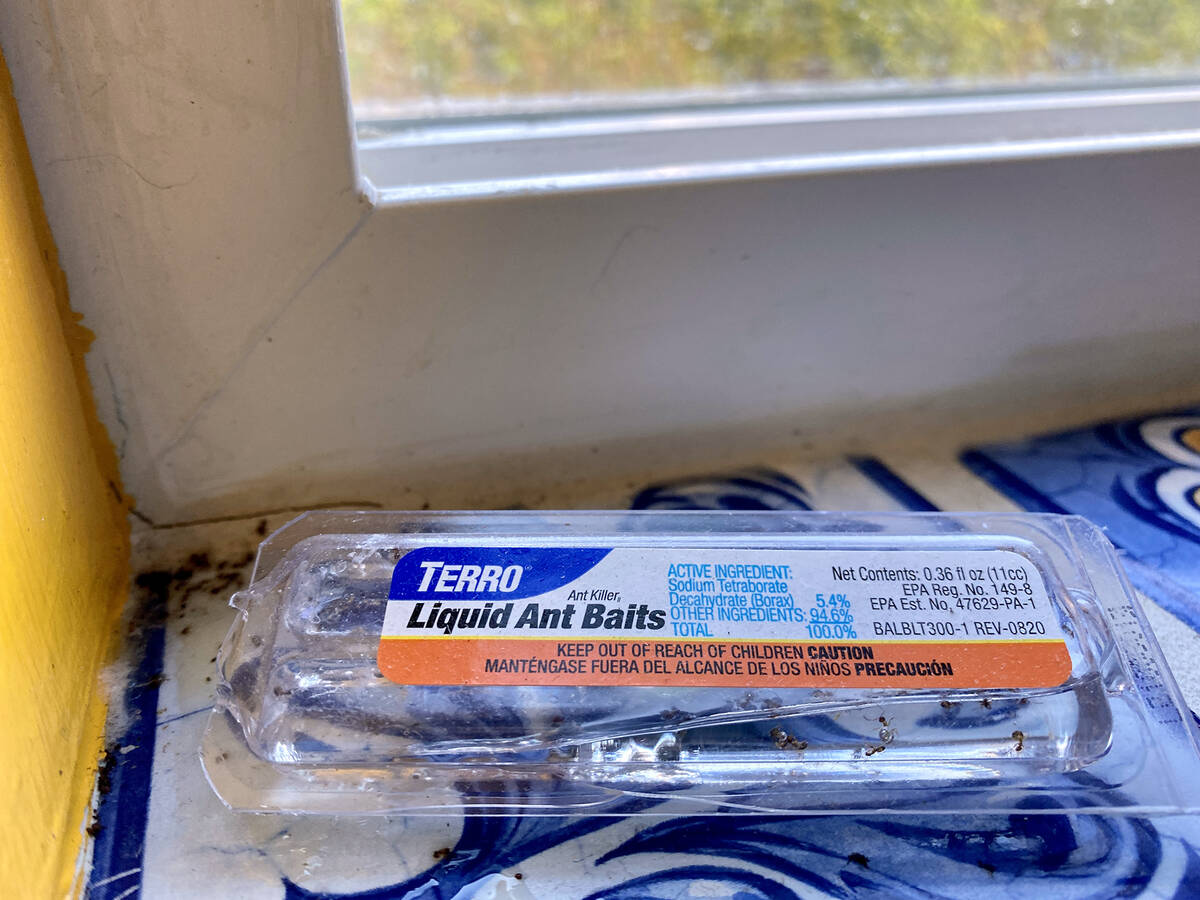 (Norma Vally) Terro liquid ant bait attracts the insects and keeps them alive long enough to bring the poison back to the nest.

A bag of ant-infested tortilla chips put me on high bug alert this past week — the immediate concern being I ate half the bag before realizing it. Ants found their way into our cupboard while we were out of town for a few days. Come to find out, two other neighbors on the block had the same unwelcome visitors within the last month.

I wondered if autumn was ant season in Southern Nevada.

“There’s no real ant season here, although they may be a bit more active in the spring,” explains Darren McLean, a retired exterminator who serviced Boulder City, Henderson and Vegas for 14 years. “Ants come in through the foundation, electrical conduits, cracks, anywhere they can find,” McLean says, “especially in older homes where there are more nooks and crannies for them to get into.”

Because they’re attracted to water, food, crumbs, etc., surfaces should always be kept clean, and food should be stored in closed containers. Even plastic food bags and chip clips won’t keep ants out if there’s the tiniest opening to crawl through. Wiping down surfaces with a water and vinegar solution works well to get rid of their pheromone trails, plus the smell repels them.

Something McLean said surprised me: Some ants eat soap. They’re attracted to the animal fat (tallow), so for grease- and fat-eating ants, soap is definitely on the menu. Be mindful of that fact around your sinks if ants show up near them.

There are several species of ants with different characteristics, but all of them are social, which means where there’s one, there’s a lot more, living in an organized colony with a queen or queens. According to a survey conducted by the National Pest Management Association, ants are the No. 1 pest concern in the U.S. While they’re small, they’re mighty, and sometimes difficult to get rid of.

According to McLean, Argentine ants are the most common household species found here. No matter the species, to really stop the problem, you must get rid of the queen(s). “Follow the ants and they’ll always lead you to the nest,” McLean explains. “The best strategy is to put down a bait that’s tastier than what they’re going after and be sure to place it in their trail.”

McLean recommended liquid ant bait by Terro. It’s a kind of nectar that attracts ants and then keeps them alive long enough to bring the poison back to the nest. Meanwhile the poison is slowly killing them by breaking down their digestive systems. Gruesome, but effective.

I watched the ants and found their trail was coming from behind the built-in microwave, gaining access from the electrical conduit. I placed traps along their trail and within a few hours hundreds of them showed up, feverishly eating and bringing nectar back to the nest. This went on for two days, and then they were just gone.

The ingredients of this liquid bait came as another surprise: sodium tetraborate decahydrate, aka Borax. 20 Mule Team Borax has been around since the late 1800s when borate deposits were discovered in Death Valley. Since then it’s been used in many household products, including cleaning solutions. It’s also effective at killing insects.

Boric acid (extracted from Borax) is sold specifically as a pesticide. The boric acid from Harris is Environmental Protection Agency-registered for use in homes with people and pets. This white powder is sold in a squeeze bottle making it easy to apply in a fine line where ants make trails.

A safe and effective way to keep ants at bay is by wiping surfaces down with a Borax solution; the residue left will keep killing after it’s dried. Another safe pesticide I’ve used with success is Orange Guard. Its active ingredient comes from orange peel extract and it’s EPA-registered for use around food, humans and pets.

For more aggressive pesticides you can order from websites like www.doyourownpestcontrol.com or contact a pest control company.