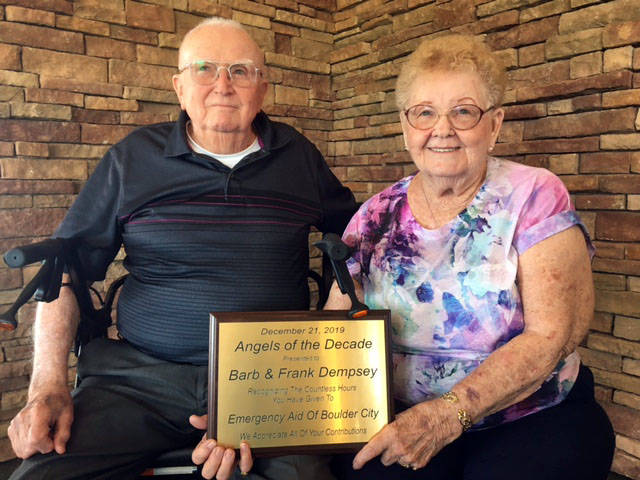 Frank and Barbara Dempsey have spent their lives serving people all over the world, including those in Boulder City.

Recently, they were honored as Angels of the Decade by Emergency Aid of Boulder City for their work with the local organization.

“It’s such a wonderful group of people,” said Barbara Dempsey. “We love everybody. That’s just all there is to it.”

“They were just outstanding volunteers. … We thought we needed to honor them,” said Mary Ralph, president of Emergency Aid.

The Dempseys moved to Boulder City in 1978 from Oxnard, California, after Frank retired from the U.S. Navy. Once in town, they joined St. Andrew Catholic Community and started doing volunteer work with it as well as with other organizations in town, including Emergency Aid.

While they were involved with Emergency Aid, Frank Dempsey did a lot of work for its food pantry. Ralph said he picked up food, made deliveries and many other things. Some of the work Barbara Dempsey did was to help organize the Angel Tree project and client intake as well as serving in leadership positions.

“It’s just been a part of their DNA,” said Ralph. “Their love of Boulder City just permeates their life. … They are the example to those of us who are younger to help those in need. They’re just so engaging. You can see their zest for life.”

Frank and Barbara Dempsey said they always enjoyed serving others, but a family tragedy in 1980 is what caused them to do more.

After she died, they said they decided to step up their volunteer work and not wait until they had more time.

“We both agreed,” said Frank Dempsey. “Why not do it now? We might not live long enough to do it after I retired.”

So they did and since then they’ve worked all over the country and the world including Kentucky, Georgia and New Guinea.

In addition to local organizations, the Dempseys were involved with the Christian Appalachian Project and Habitat for Humanity.

With Habitat, Frank Dempsey worked all over the United States and did a cross-country trip where he helped build houses at all of the stops. He also worked as an umpire at Boulder City High School softball games and was a referee at some of the volleyball games.

“We’re happy campers and, except for Patty’s death, we’re really blessed,” she said. “Life is good. We plan to keep on keeping on.”

Frank and Barbara Dempsey are 89 and 86 years old, respectively, and have been married for 69½ years. She said they are excited about celebrating their 70th anniversary in February.

Barbara Dempsey said they are heading to California later in the month to meet the two great-great-grandchildren, who were born during the pandemic.