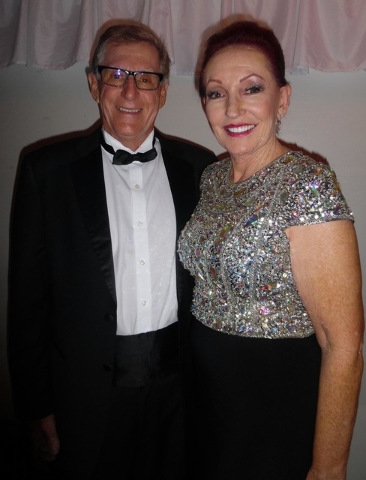 John and Christine Milburn were recognized for their longtime devotion to the community and its residents during the seventh annual Heart of the Community Gala presented by Boulder City Hospital on Saturday.

“It’s a humbling experience,” Christine Milburn said. “I am at a loss for words, and I’m usually never at a loss.”

“We are both happy for each other,” John Milburn said, adding that his wife deserves much of the credit for the work she has done on behalf of the hospital.

As a member of the hospital’s board of trustees and foundation for the past 13 years, Christine Milburn has been involved in coordinating the gala for the past several years.

In return, his wife of 24 years said they mutually admire each other and what they have done for the community.

The two were introduced at the gala by last year’s recipient, Bruce Woodbury, who shared the honor with his wife, Rose Woodbury.

“The community has been blessed for many, many years to have John and Christine as friends and neighbors,” he said, adding that they have worked tirelessly and selflessly to make Boulder City a better place to live.

John Milburn was a science teacher at Boulder City High School, where he also coached state title-winning basketball teams. He also coached golf. During his career, he taught and coached many of Boulder City’s leaders including past and present mayors Roger Tobler and Rod Woodbury.

Also, John Milburn is a past president of the Boulder City Sunrise Rotary Club and was instrumental in getting the club to support a program providing care packages for military troops.

Christine Milburn is a former Boulder City councilwoman and planning commissioner and state senator. She has received several awards for her service to the community, including being named as one of President George H.W. Bush’s Thousand Points of Light and receiving the Daughters of the American Revolution National Medal of Honor.

She has served as president of the hospital’s board of trustees twice and been a key fundraiser. Also, she founded Operation Godspeed during the Gulf War, and that effort resulted in funds for the chapel at the Southern Nevada Veterans Memorial Cemetery.

“Christine is very singled-minded and hard to say no to,” said John Milburn while accepting the award, adding “at home she’s still the same,” which brought the crowd to laughter.

Christine Milburn thanked everyone attending the gala for their support of the hospital and its mission of providing “quality health care close to home.”

A silent auction started the evening’s festivities, and a live auction brought it to a close. Eleven special items were sold during the live auction, raising more than $27,000 for the hospital.

The evening included a special fundraiser for the hospital’s long-term care center, with an additional $14,850 donation.

Kathy Calhoun spoke of the 45-bed skilled nursing facility as a place that provides TLC, tender loving care, to its residents.

“It’s an area of the hospital that is near and dear to my heart,” she said, trying to hold back tears.

She said there is no better way to describe the long-term care center and asked those in attendance to help with donations to offset the cost of special events and field trips, which she said are essential to the residents’ well-being.

In addition to the tribute to the Milburns, the late Dr. Michael Ravitch, an orthopedic surgeon and former chief of staff at the hospital, was recognized. Ravitch died in January, three years after retiring.

Ravitch also was a member of the hospital’s board of trustees, serving in the same capacity at St. Rose Dominican Hospital. He was the founder of Henderson’s Emergency Medical Services and Black Mountain Orthopedics.

The tribute ended with the presentation of the first Hospital Medical Professional of the Year Award in his memory, given by Ravitch’s widow, Donalene Ravitch, to Dr. Derek Meeks, who is medical director for the hospital’s emergency room.

A moment of silence was held for Art Olsen, who died Aug. 6, 2014. Olsen was an avid supporter of the hospital, with the Boulder City Museum and Historical Society, and was a major donor.

Olsen had served as the Clark County deputy district attorney, a county commissioner, justice of the peace and in the state Assembly.