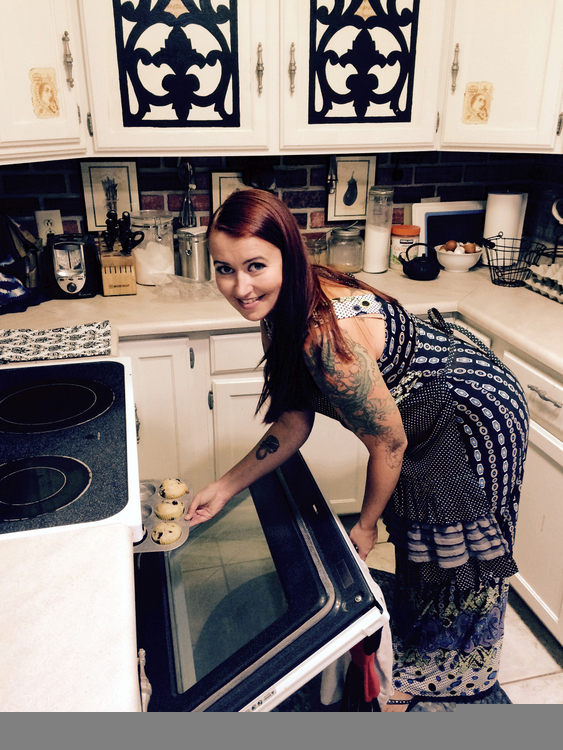 Andy Saylor/Boulder City Review Brandi Andrews takes some coconut lemon muffins out of the oven at her home in Boulder City.

Brandi Andrews is a contradiction in styles. Tattoos adorn her body while chickens cluck in the backyard.

Growing up the daughter of a teacher who worked on the Wind River Reservation in Wyoming, Andrews spoke fluent Arapahoe before she was 10. Having already learned rudimentary French at 7, she dreamed of moving to Paris someday.

When she turned 10 her dad took a position in Arizona because her mother was tired of the cold.

A neighbor in Arizona raised chickens and she learned quickly about these ax80x9Cincredible creatures.ax80x9D She has since parlayed her knowledge into becoming a resident expert in the newest Boulder City foray into a sustainable lifestyle.

ax80x9CIf youax80x99re going to raise chickens, you need a certain amount of veterinary knowledge. In the area there is only one vet with avian knowledge and they are only in two days a week,ax80x9D she said recently while sitting in her kitchen enjoying a coconut lemon muffin.

ax80x9CI recently grew grains to make my own flour so my children would know where their food comes from. We have chickens in the backyard and grow tomatoes and squash and all kinds of vegetables,ax80x9D she said.

Daughter Lilly can rattle off a list of the vegetables and fruits including artichokes, cucumbers, tomatoes and Brussels sprouts that she enjoys and also will tell how much ax80x9Cfunax80x9D it is working in the garden with her mom.

Lilly and her sisters, Leida, 3, and Lucy, 6 months, are the driving force behind Andrewsax80x99 attempt at natural and knowledgeable living. She teaches her family, friends and most anyone else within earshot about the wealth of skills she has attained from her parents, grandparents and anyone who knew anything about a particular subject.

Her baking expertise was imparted by her mom, who is an award-winning pie maker. Her grandparents were farmers and she learned well.

When she was going to college she became interested in animal training and assisted SWAT and police agencies training their dogs.

She also became interested in tattoos and sports several in various locations on her body.

ax80x9CWhen I was in Prescott Ariz., I was a baker in the morning and in the afternoon was working at a local tattoo parlor as a receptionist. I had a lot on my plate but really enjoyed it,ax80x9D she said.

When Andrews speaks about a ax80x9Cfull plateax80x9D she isnax80x99t kidding. Her husband, Ethan, is a mechanic at a local casino. They have three daughters, three dogs, nine chickens, she helps with her daughterax80x99s Girl Scout troop’s food drive, acts as a resident avian community guru and raises several items in her vegetable garden.

Ethan is a graduate of Boulder City High and the couple chose to make their home here because ax80x9Citax80x99s the perfect place to raise my children,ax80x9D she said.

Friends, neighbors and family are provided excess eggs and vegetables and she is usually blessed with a bountiful harvest when they have extras.

Andrews said she is always looking for ways to expand her repertoire and has had many experiences over the years.

She taught ballet and dance in Boulder City. She is in the process of restoring a vintage ax80x9859 Ford and teaches her children about living a ax80x9Cnatural life. I want my kids to know where food comes from and what it takes to get from a seed to the table,ax80x9D Andrews said.

ax80x9CItax80x99s very satisfying to sit down to a meal and know where each item came from. My kids can tell you where each thing grew and how much they enjoyed growing it.ax80x9D

ax80x9CWe recently enjoyed Thanksgiving with many family members who were vegan and several who were not. So we had traditional turkey, stuffing and so on. But we also had Tofurky and all the trimmings too,ax80x9D she said.

When she isnax80x99t gardening or being a mechanic, chef, baker and veterinarian, she is an advocate for children and community projects.

ax80x9CI would like to see a communal garden where people could donate labor and share the harvest. If you work 20 hours on the garden, then you are entitled to 40 pounds of food type of thing,ax80x9D she said.

Andrews has many ideas about community programs and takes a sense of pride in helping others. She is raising her children to have a social conscience and is teaching them to take responsibility for the world around them.

So when you see the ax80x9Ctattooedax80x9D lady leading the Girl Scout troop or drive by in her Ford with the ax80x9Cskullsax80x9D for exhaust pipes, remember to smile and ask about the latest crop of vegetables.

Boil cubed yams uncovered in water and broth in a large pot until very soft.

At the same time, dice up the yellow onion and carmelize in a large skillet with either the oil or butter.

Using an immersion blender, or transfer the soup in batches to a blender, blend until entirely smooth. If using a blender, return soup to the pot and add diced bell peppers and the drained can of corn.

Simmer for about 5 minutes.

Add can of coconut milk and stir completely.

Season with cayenne pepper (I like to use AxBC teaspoon) and add salt, if desired.

Combine all ingredients and spread in a 9-by-13 inch greased pan. Bake at 350 degrees for 40 minutes or until an inserted toothpick comes out clean.