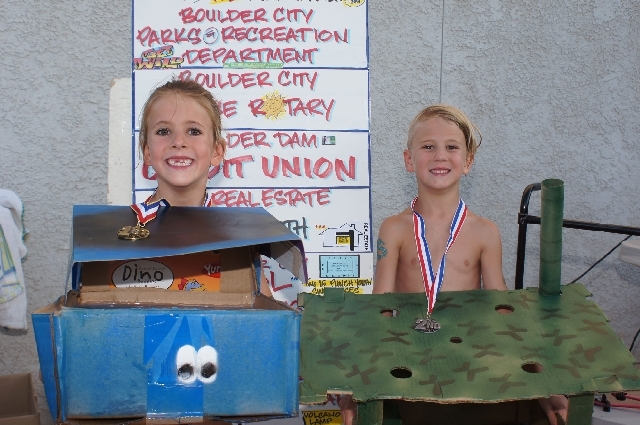 Every child participated at no cost because of the sponsors, went home with a raffle prize and was given a goodie bag and a participant ribbon. Special awards were judged by Mayor Roger Tobler, Mayor ProTem Cam Walker and Councilman Rodney Woodbury.

Top winners for most original went to Avery Huysentruyt; historic to Jared Benson; funniest to Ashlyn Lappin; and a single Mayor’s Award, which went to Katie Kucik. The Titanic Award went to Elodie Beutler.

First- and second-place medals were awarded for the top two finishes in two heats in three age groups, and one heat in one age group.

Participant ribbons were given during the water races in all four age groups.

The Cardboard Boat Race is hosted every July. Feel free to contact the Boulder City Pool and Racquetball Complex, 861 Avenue B, for further information on this event, learn-to-swim classes, programs, events and more at 293- 9286.