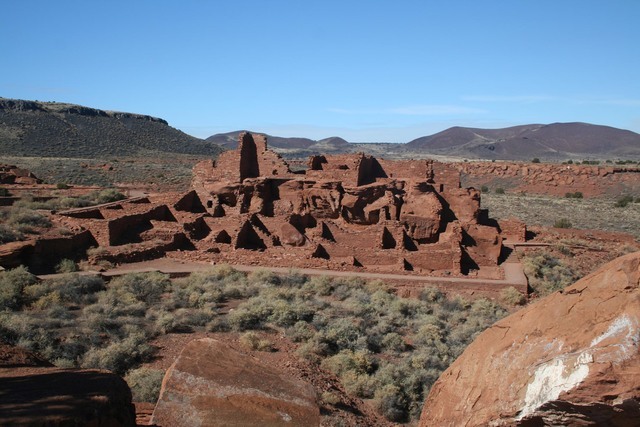 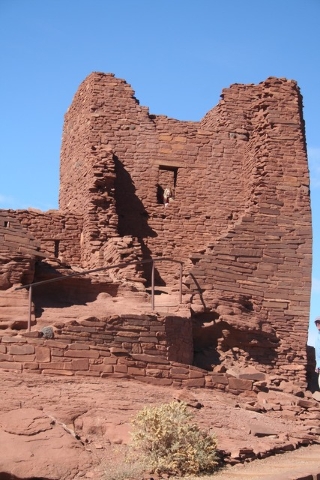 Wukoki Pueblo is one of the best preserved in the Wupatki National Monument and was thought to have been occupied from 1120 to 1210. Photo courtesy Deborah Wall

Wupatki National Monument in Arizona encompasses more than 35,000 acres and contains roughly 2,500 documented archaeological sites. You cant see them all, nor are you allowed to, but you can see some of the most impressive ruins in the park, even in a few hours.

Located west of the Navajo Reservation, southeast of the Colorado River, and about a 45-minute drive east of Flagstaff, it is a destination not to be missed if you are doing some summer touring in the region. The relatively high altitude  4,900 feet at the visitor center  yields mild daily high temperatures compared to Southern Nevada.

At the forefront of the park is Wupatki Pueblo, one of the most impressive pueblos I have been to. As was common for pueblos in the area, it was built using a rock outcropping of red sandstone as its base. This pueblo is associated with the Cohonina, Sinaga and Kayenta people.

It is thought this settlement started as a small one, as early as 500 A.D. The population is thought to have grown enormously after a volcanic eruption at what is now called Sunset Crater, just 21 miles away. The eruption sprinkled ash over the landscape surrounding Wupatki, and the ash helped keep moisture in the soil, greatly improving agricultural opportunities. The people were primarily farmers, planting crops such as corn, beans and squash, but they also were hunters, seeking out pronghorn, deer and a variety of smaller game.

By the late 12th century, thousands were farming this region. Some of them moved into Wupatki Pueblo, which soon expanded to three stories high with 100 rooms. This larger version of the original pueblo was used from approximately the 1180s to 1225. After the ruins were designated a national monument in 1924, Wupatki Pueblo was partially excavated, and much of it has been stabilized over the years to stop further damage.

A visit to the park starts at the Wupatki Visitor Center. There is a small museum displaying artifacts such as arrowheads and ceramics and informative interpretive displays about the monument. This is the place to pick up a trail guide, useful in identifying the different structures and rooms you will see as you walk around.

The paved Wupatki Pueblo Trail starts directly out the visitor centers back door. The self-guided tour covers a half-mile loop that takes you on both sides of the pueblo. Be sure to walk down the hill away from the pueblo to see the two large round structures, which are a ceremonial ball court and a community room.

Ball courts have been found in other areas of Arizona but this one is so far the only one discovered of stone masonry. The court is about 100 feet long by 64 feet wide, with an opening at each end.

One of the most interesting geological features you might ever see is located here: a blowhole. This natural blowhole was formed from a fracture in the earth. Depending on when you visit it will be either blowing out a powerful blast of air, or sucking in the equivalent. When the outside air heats up, it blows out so strong that if you have long hair and lean over it closely, your hair will fly up in the air. Rest assured there is a safety grid over the hole so no one can fall in.

By around 1225 the pueblo was abandoned and different theories abound as to why. Was it drought, disease, social factors or perhaps a combination of all these problems? As you walk along the trail it is interesting to reflect about this mystery, and the more thoughtful will wonder how our own towns will look in about 800 years.

The visitor center at Wupatki National Monument is open daily from 9 a.m. to 5 p.m. MST, except Christmas. Because Arizona does not observe daylight saving time these hours coincide with Nevada time when Nevada turns the clock forward.

There are no services in the park but most anything you need can be found in nearby Flagstaff. The closest camping is at Bonito Campground, about 20 miles from the Wupatki Visitor Center and at an elevation of 6,900 feet, perfect for summer camping. It is available on a first-come, first-serve basis in the Coconino National Forest; call 928-526-0866 or visit fs.usda.gov/coconino for details.

Many of Deborah Walls columns have been compiled in the book Base Camp Las Vegas, Hiking the Southwestern States. She is also the author of Great Hikes, a Cerca Country Guide and a co-author of the book Access For All, Seeing the Southwest With Limited Mobility. Wall can be reached at Deborabus@aol.com.