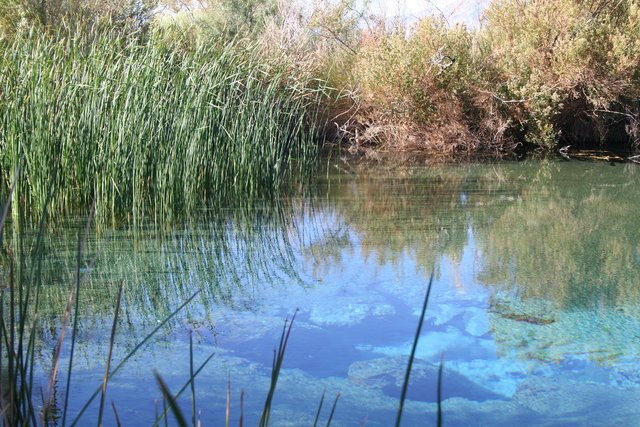 With the opening of school and the approach of holidays, most of us become too busy to escape, for long, from our city lives. That makes the Ash Meadows National Wildlife Refuge a good choice for a September escape.

Lying in Nevada near the California state line, it’s close enough to enjoy thoroughly in a single day, yet it’s a little farther north, a little higher and therefore a little cooler, than our own valley. Now is an especially good time to go if you enjoy bird watching or counting how many different kinds you can see; the fall migratory season is upon us, and more than 275 species have been recorded there.

Encompassing about 24,000 acres, this is not one of our country’s bigger sanctuaries, yet it’s the largest oasis in the Mojave Desert. Its seven major springs and accompanying wetlands support 26 endemic life forms — creatures found nowhere else in nature!

One of rarest, the Devils Hole pupfish, occurs naturally only in a single spring with a surface area hardly bigger than a bathtub and clings to existence so perilously that this spring is closed to all but scientific visits.

However, there are three other native fish species in the park. The easiest to spot is the Amargosa pupfish that can be seen at Kings Pool along the Point of Rocks trail. The trail is a quarter-mile loop of boardwalk that leads you to their favorite hangout, the crystal-clear waters of a natural pool. They’re all tiny creatures, but the males are turquoise colored and a little bigger than the green females.

Pupfish also live, but are harder to spot, in Crystal and Longstreet springs. The Crystal Springs Boardwalk trail starts near the visitor center, and takes you 0.7 miles round-trip. There are interpretive signs and resting benches along the way. This spring produces about 2,800 gallons of water per minute. This area also is where desert bighorn sheep are most likely to be seen.

The Longstreet spring is a beautiful blue natural artesian well, about the size of a small man-made backyard pool. It’s also known as “the boiling spring” because the water flows upward from it so strongly that the white sands on its bottom churn in constant motion. This place is not only a natural wonder but a historic site, for next to the spring stands a charming cabin built by frontiersman Jack Longstreet in 1895, and restored in 2005.

Longstreet was born about 1830, is said to have served in the Confederate army, and showed up in Nevada by the 1880s. A saloon operator and small rancher, he became an advocate for the oppressed Southern Paiute people and was instrumental in arranging the replacement of at least one incompetent or corrupt Indian agent. Once he led a mob of Indian laborers against a mine superintendent who refused to pay them fairly. They yanked him from his bed, marched him around his yard naked while the laborers “switched” him with twigs, inspiring a change of heart.

Longstreet had to flee to avoid prosecution for his part in this extralegal proceeding, but he was an old hand at such flights. His long hair covered an ear cropped short for cattle rustling, and his .44 Colt pistol had more than one notch on its grip. In fact, it is said Longstreet settled at the spring that now bears his name partly because it offered the means to withstand a siege by a posse or other unwelcome visitors.

Besides the big water supply at the front door, the cabin had an internal one. Its back wall is dug into a spring mound, whose cooling waters also served Longstreet as a primitive refrigerator. And he built the walls of the cabin out of bulletproof stone. A bullet bearing Longstreet’s name actually did find its fatal mark, but not until 1928, and Longstreet himself discharged it, probably by accident.

The refuge is in the first stages of construction of a new visitor center. The current visitor center is open from 8 a.m. to 4:30 p.m. Monday through Friday and weekends and holidays when staff is available. Call 775-372-5435 or visit www.fws.gov/refuge/ash_meadows for more details.