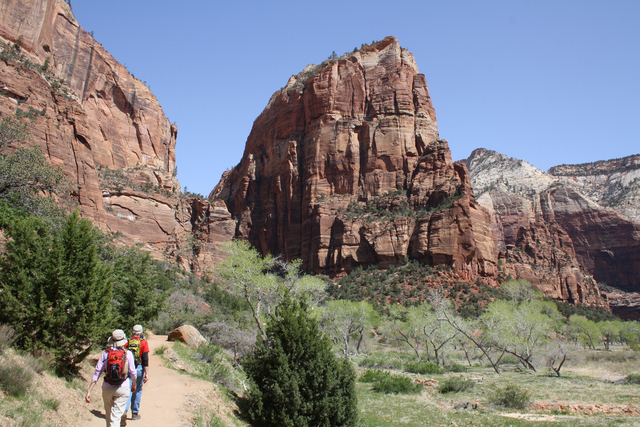 Angels Landing in Zion National Park, Utah, is a viewpoint atop a giant red sandstone monolith, offering one of the best panoramic views in the park, which is to say, one of the best in the American West.

The 5-mile round-trip hike to Angel’s Landing is famous among hikers throughout the world, mostly because it is one scary trail, especially in the last bone-chilling half mile. If this hike is on your bucket list, it’s good to do it in spring, after the sun has melted any ice that might have slickened the path, and before summer brings the year’s largest crowds and hot temperatures to the park.

This is not a trail for small children or those uncomfortable with heights, for in the last section you must walk across a narrow ridge with drop-offs as deep as 1,200 feet! There are chains bolted into the rock for hikers to grip, but few people can avoid thinking about what would happen if they somehow fell anyway.

That’s the psychological challenge. The principal physical challenge is that the hike begins at about 4,300 feet elevation and gains 1,488 feet, ending more than a mile high, so you need to be acclimatized to heights, in good shape, or else allow yourself extra time to rest along the way.

Take the West Rim Trail, which starts on the west side of the North Fork of the Virgin River. It begins in a riparian woodland of Fremont cottonwoods and velvet ash, which then gives way to pinyon pine and juniper as you gain elevation.

The trail first heads north and then west to a steep canyon wall. Here you will find a series of switchbacks carved into the stone in the mid-1920s so you can access the hanging canyon above. This is Refrigerator Canyon, a narrow passageway that hardly sees the sun, hence the name, and even at about 5,000 feet in elevation it supports bigtooth maple and white fir trees. The canyon also is home to naturally eroded sandstone in fantastical shapes, overhangs and cavelike formations.

Once you reach the end of Refrigerator Canyon the trail takes an abrupt right-hand turn and brings you to the base of Walter’s Wiggles, a series of 21 short, paved switchbacks that climb up about 300 feet to Scout’s Landing. This engineering feat was the brainchild of Walter Reusch, the first acting superintendent of Zion, and, of course, is named for him.

Scout’s Landing is where things really change up for the hiker. This is a good place to rest, while contemplating the trail ahead and deciding whether to continue. For those who decide to persevere in adventure, this is the place to check that shoelaces are tied, backpack is securely strapped to the body, and that no clothing is hanging loose to catch on an outcrop and pull the hiker off-balance.

From here to the summit is a bit nerve-racking even to seasoned hikers. In the sections that are most perilous, you’ll grab the chains to help you get across the rocky areas with the highest drop-offs. Yes, people have fallen to their deaths here. I have personally seen people crawl along the narrowest part to avoid a similar fate, or perhaps to avoid thinking about that fate. Do not judge them until you have crawled a few yards in their hiking shoes.

Once you reach Angels Landing itself, the terrain is fairly flat and you can move around, although there are no guardrails. The views are some of the best in the park, especially looking down canyon and seeing the North Fork of the Virgin River wind its way down Zion Canyon, with a ribbon of green deciduous trees flanking its banks. The experience brings new meaning to the term “sitting on top of the world.” And a big part of that exultant feeling is knowing that you got here of your own free will and energy. What others did not dare, you did!