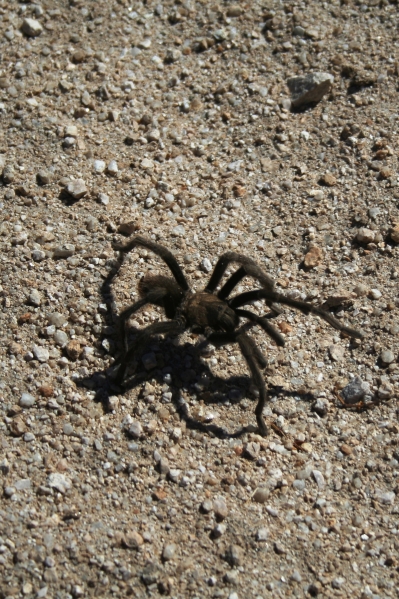 Right now you might be seeing a tarantula or two while driving or hiking around the backcountry. Rather than dissolving into a quivering pool of arachnophobia, try to focus on the interesting aspects of our eight-footed friends.

Big and hairy they are, and therefore intimidating. But like many big and hairy humans, they are not looking for trouble. Tarantulas are, in fact, among the least aggressive spiders. Their bite isn’t even dangerous to most humans, though their reputation has suffered from mistaken identification of various distant and deadlier relatives. None of these bad actors visit Nevada, except in urban legends.

More than 50 tarantula species live in the Southwest, not so many considering there are more than 800 species worldwide. They’re found in every continent except Antarctica. Our mature tarantulas in the Southwest usually are about a half-inch to 4 inches long. That’s not unusually large by tarantula standards; there’s a Venezuelan species with a leg span of about 11 inches.

I have been fortunate to see dozens of these spiders, primarily in Southern Nevada, Southern California and Arizona. Mostly I see them on rural desert roads, such as the main roads into Death Valley and back roads in the Lake Mead National Recreation Area, but I also have spotted them on U.S. Highway 93 near Pioche and on U.S. Highway 95 and back roads in northwestern Arizona. Many times I have seen a dozen or so within a mile.

Tarantaulas mostly live in burrows, but some have been found to live in trees and rock crevices.

Female tarantulas in the Southwest can live about 30 years while males usually only live five to 10 years, dying happy, I suppose, just after reaching sexual maturity and presumably experiencing some meaningful relationship.

There is a theory that the males’ sexual desire is the cause of their short life expectancy. They put themselves in danger when they search for a female during daylight hours, when various predators are looking for lunch. Furthermore, male tarantulas are habitually involved in bad relationships; once they mate they need to escape quickly, because the female is hungry after sex, and the closest meal is often her boyfriend.

If you are truly an arachnophobe, you won’t hang around after the six- to nine-week incubation period, for they often have about 500 to 1,000 young.

New World tarantulas have two methods of defense. Besides being able to bite like other spiders, they have specialized hairs on their abdomen that serve as a defense if something tries to eat them, and they can actually throw these hairs at enemies. When they strike humans the hairs mostly cause irritation, rather like stinging nettles, but they can be more serious if humans get them in the eyes or inhale them. As for a tarantula’s bite, it’s comparable to a bee sting — not unbearable to most people, but definitely to be avoided, particularly because some people are highly allergic to them.

Tarantulas have retractable claws like a cat, and while most of their life is spent on the ground, they use the claws when they do need a good grip to climb.

I have seen many people over the years who, finding a tarantula in the wild, encourage it to crawl on their hands as if to say, “Look at me and how brave I am.” I am not impressed when I see this.

Of course, the show-off is risking a painful, if harmless bite or barrage of stinging tarantula hairs. But I also can’t help remembering that if he drops this spider, it will probably rupture the creature’s fragile exoskeleton, killing it. People who leave tarantulas alone seem to me, shall we say, smarter?

If this article has made you comfortable about tarantulas but you still need something to worry about, then I would recommend the tarantula hawk wasp as a replacement bugaboo. This wasp grows up to 2 inches long and is strong even for its size, able to capture and paralyze live tarantulas to feed their young.

While it rarely picks fights with humans, if this wasp does sting you it will be much more painful than being targeted by tarantula barbs. In fact, on the four-degree scientific scale of painfulness of insect stings and bites, the tarantula hawk gets a four — the most painful rating. (To put that in perspective, a fire ant only rates a one.) Unbearable pain lasts only about three minutes, but those will be long minutes, and the sting site will stay sore for a week.

Carrying around the natural counterpart of a nuclear weapon, the tarantula hawk has almost no natural enemies. The exception is the roadrunner, which seems immune to the sting’s ill effects. Some other insects have adapted the tarantula hawk’s distinctive black-and-orange coloration, disguising themselves as characters definitely to be left alone.

Just in case I ever have a disagreement with a tarantula hawk wasp, I am trying to devise a convincing way to look like a roadrunner.