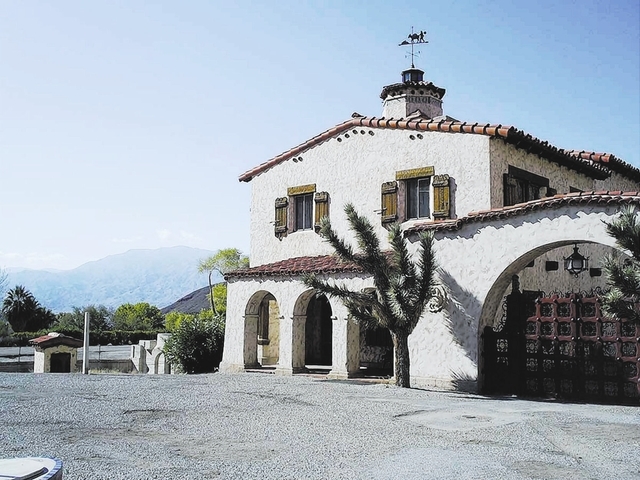 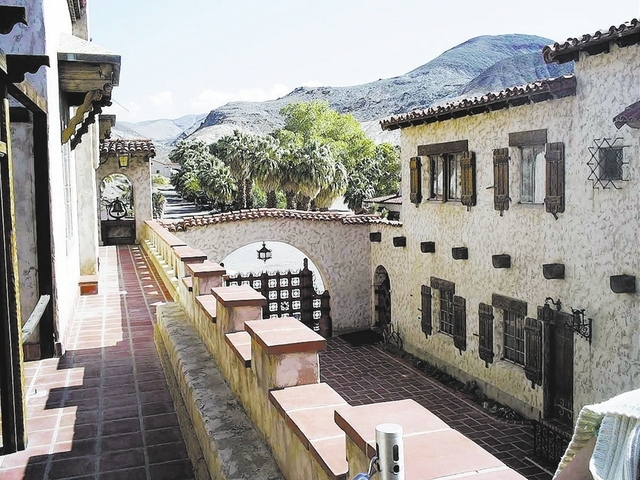 Over the next six months or so, Death Valley National Park, California should be a must-do entry on your weekend travel list. You will find pleasant temperatures and sunny skies that afford great hiking, road trip and camping opportunities. An added bonus to these outdoor pleasures is visiting Scotty’s Castle, only about three or so hours northwest of Las Vegas, depending on the route you choose.

Part of the charm of this unique home is the very idea of a “castle” in the famously rugged and mostly barren terrain. Yet it was even more remote and virtually uninhabited when the castle was built, long before the fabled valley became a park. It is an elaborate and tasteful Spanish Mediterranean-style mansion, built in the 1920s by wealthy Easterner Albert Johnson. The castle is at an elevation of about 3,000 feet in a desert oasis with mature palm trees and a running spring-fed stream on the property.

You can take a self-guided tour of the grounds or take a guided living-history tour of the main house interior. The house tour lasts about 50 minutes and takes you throughout the lavishly decorated structure and ends with a demonstration of the 1,121-pipe theater organ. This tour is available year round.

You can also take an underground tour that takes you to the basement via a tunnel system and reveals the inner workings of the castle’s power system. This tour lasts about one hour and includes a demonstration of the Pelton Water Wheel used to supply the castle’s electricity. This tour is available daily from November to April and occasionally in October.

Johnson originally came to this area to check on his investments in a gold mine, promoted by Walter Scott, known as Death Valley Scotty. Johnson eventually figured out that Scott had no such gold mine and was a compulsive liar and a con man.

He was, however, an extraordinarily colorful example, and Johnson so enjoyed his company, that he began visiting Scotty regularly, camping rough beneath the stars or in a rude shack. Eventually, Johnson brought along his wife, Bessie, who also enjoyed the climate but wanted some accommodation that was more polished than a prospector’s shanty. Her extremely rich husband obliged her, starting construction in 1922, and Bessie’s educated tastes are heavily reflected in the unique and charming winter mansion you see today.

However, it amused Johnson to allow his friend Scotty to claim he built the castle with proceeds from his secret gold mine, which he claimed was below the main house. Johnson built a nearby residence for Scotty, where the latter was on call to entertain castle visitors with his stories of dangerous deeds in the West that still (in his stories) remained pretty wild. Later Scotty was allowed to move onto the castle grounds.

His presence on the property reinforced his spurious claims to ownership. Scotty frequented the bars of Central Nevada and Las Vegas, ordering many a drink and often contriving to avoid payment.

This impressive castle seems out of place in this rugged landscape but once you take a tour and hear more of the background you’ll find it a wonderful historic gem. Nobody ever regrets the time spent visiting it.

Guided living history tours of the main house interior and the underground tour are available daily. Tickets can be obtained onsite, yet reservations are strongly recommended this time of year through spring. Regular adult tickets are $15 and $7.50 for interagency seniors, access pass holders or children 6 to 15 years old. Children younger than 5 get in free, 877- 444-6777, www.recreation.gov.

Gasoline is not available at Scotty’s so be sure to fill up your tank in Beatty before heading to the castle. Drinks and prepackaged food items are available at the book/gift store.

For those who plan to stay in the area and want to camp, the Mesquite Springs Campground is about 10 minutes away. It is at an elevation of 1,800 feet, has flush toilets and 30 sites with tables and firepits, at $12 per night. First-come, first-served.

Many of Deborah Walls’ columns were recently compiled with new information and photos in “Base Camp Las Vegas” and published by Stephens Press. She is the author of “Great Hikes, a Cerca Country Guide.” Wall can be reached at Deborabus@aol.com.