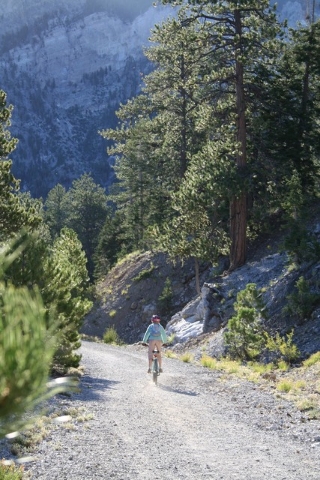 In the torrid midsummer of Southern Nevada, the closest place for local folk to enjoy a cool outdoor escape is in the Mount Charleston area of the Spring Mountains National Recreation Area. Since youre likely to head there anyway, you might as well choose a trail that will show you some of the areas most pleasant scenery while putting some miles on your boots. Or, for that matter, your fat tires or your horses shoes. The entire trail is popular with mountain bikers as well as hikers, as are its lower reaches for equestrians.

There are two trail heads, called the upper and lower, so you can choose to start at either. But if you are not doing the entire trail, definitely start at the upper one, because youre sure to get the best of the scenery early in the hike. If you want to do the total 6-mile loop you will have to walk about a half-mile between the two trail heads, some along the road and some on a path, either at the start of the hike or at the end to reach your vehicle at the other trail head where you left it.

The elevation is 8,680 feet at the upper trail head and 8,462 at the lower. That means youll sunburn and dehydrate easily in the high, thin atmosphere, so applying sunscreen and carrying extra water are advisable. But aside from the challenge its altitude poses for lungs used to the much-lower Las Vegas Valley, this is a hike of only moderate difficulty.

Assuming you will start at the upper trail head, you will find it at the very top parking area of the Lee Canyon ski area. The trail head is signed, and the obvious trail heads up the ridgeline to the north and right side of the ski slopes. You will find yourself immediately within a forest of ponderosa pine, bristlecone, white fir and mountain mahogany, mixed with aspen.

You might see, or at least see evidence of, lots of wild animals that live in this area. Look for wild horses on the lower slopes of the ski resort. Look along the trail for tracks that can include those of deer, elk, bobcats or even mountain lions. Birds like it here as much as we do, so you might see Northern Goshawks, woodpeckers, chickadees, warblers or bluebirds. If you see a chipmunk, it could possibly be a Palmers, found only in the Spring Mountains at high elevations like these.

As the trail loops around, views open up and you will see the northwest side of Mummy Mountain. Later youll come to an exposed point where you can see down into Lee Canyon and all the way to the Sheep Mountains, the next major range to the east, which is part of the Desert National Wildlife Range.

You wont see many conifers on these rocky slopes, but the ones you do see are likely to be members of the plant kingdoms toughest species: bristlecone pines. Prospering in wind-blown and seasonally frigid environments where little else could survive, the oldest living trees known are bristlecones, and some on this very trail are pushing 5,000 years.

Slow and steady wins long life for these trees; they increase in girth less than one one-hundreth of an inch per year, and a bristlecone only 5 feet tall might be 2,000 years old. The gnarled and twisted citizens of these slopes belong to the longest-living of three bristlecone species, which is found only in Nevada, Utah and Eastern California. If trees can be celebrities, youre among them.

The trail narrows as it reaches its summit, at about 9,400 feet, then rounds a rocky slope toward Scout Canyon Road. Graveled but now abandoned, this road serves as a trail for the rest of the hike.

At a point about halfway around the loop youll come to a saddle and a sign identifying the Bonanza Trail head. If youre a backpacker, remember this place for the Bonanza Trail offers some of the best chances of solitude to be found in the Mount Charleston Wilderness Area.

As you continue down the road youll be able to see the ski slopes again. Above them, look for the tracks of winter avalanches. Soon youll walk through the whispering leaves of an aspen grove before the road levels out and brings you to the lower trail head parking lot.

Many of Deborah Walls columns have been compiled in the book Base Camp Las Vegas, Hiking the Southwestern States. She is also the author of Great Hikes, a Cerca Country Guide and a co-author of the book Access For All, Seeing the Southwest With Limited Mobility. Wall can be reached at Deborabus@aol.com.