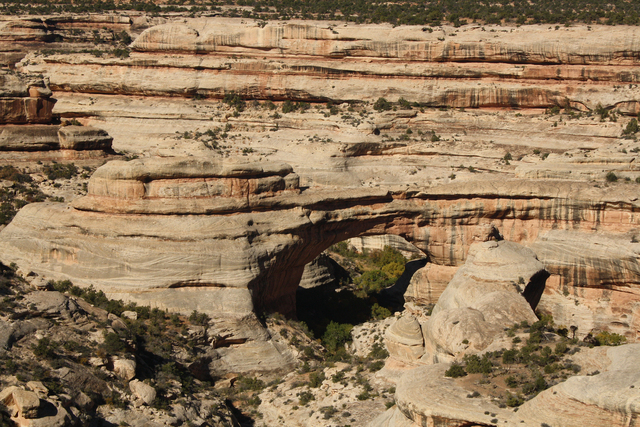 Getting to Natural Bridges National Monument, Utah, takes a little more time and trouble than some weekend jaunts, but the rewards are also a little bigger. You’ll not only see three of the nation’s most impressive natural bridges, but also, on the way there, you will see some more of the Southwest’s most spectacular scenery.

Located near the Four Corners where Utah, Colorado, Arizona and New Mexico come together, the monument was established to protect the bridges. Although easily confused with arches, natural bridges are much rarer. They are formed in deep canyons and always by water cutting through the stone over the years. Arches are primarily created by gradual erosion.

Summer is a good time to visit, as the elevation in the park is about 6,500 feet, making its temperatures a pleasant contrast to the three-digit days expected in Southern Nevada this time of year. The park is on Cedar Mesa and the highlight is driving and checking out the viewpoints along the 9-mile scenic loop from the visitor center.

All the bridge names evoke Native American words or concepts. Kachina Bridge was named after rock art designs that were found on the formation; the designs resemble those used in Kachina dolls. Owachomo Bridge is named for a feature on the bridge’s east side; “owachomo” means “rock mound.” The Sipapu Bridge is named after a spot where the Hopi believe their ancestors entered this world. “Sipapu” means “place of emergence.”

Leaving the visitor center on the scenic loop drive, the Sipapu Bridge will be the first one you come to. This bridge is at least the second-largest natural bridge in the world. It spans 268 feet and is 220 feet tall. (It is thought that the Rainbow Bridge at Lake Powell is just a few feet larger, depending on who is measuring, and how.)

The Kachina Bridge overlook will be the next stop. The walkway to the overlook is steep and people using wheelchairs or other assistance devices will need help in getting to it. This bridge spans 204 feet and is 210 feet high.

Owachomo Bridge will be your final stop. This is probably the most stunning bridge yet. It is situated at such an angle that unless the sun is perfectly aligned under it, it is hard to see its virtues. This bridge is 106 feet high and spans about 180 feet.

The night skies at the monument are some of the best in the country for contemplating the universe, because their beauty is uncompromised by light from any nearby town. The Dark-Sky Association designated Natural Bridges as the world’s first International Dark Sky Park. That is quite a special distinction and worth traveling to the place just for that reason.

It would be a very fine place to spend those darkest hours before the dawn on Aug. 11-13, when the Perseid meteor shower is expected to peak. This year’s shower is supposed to be especially easy to view because there will be only a crescent moon to compete, and it won’t rise until about dawn.

There are no services in the park but Blanding, Utah, has full services and is located about 35 miles east. There is a picnic area and a campground in the park. The latter offers 13 sites, all with tent pads, grills and tables as well as a campground restroom. For information, call 435-692-1234 or visit www.nps.gov/nabr.