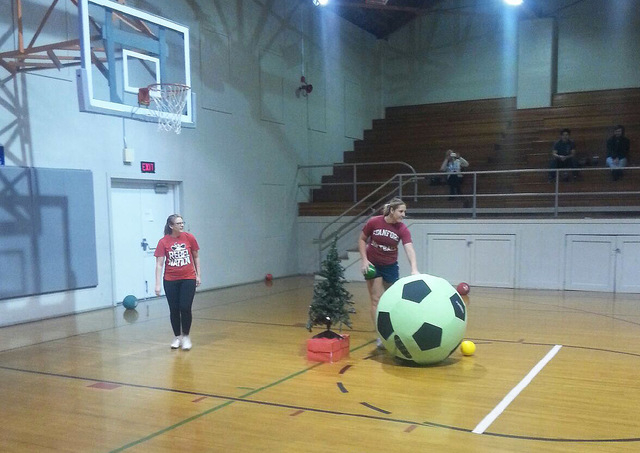 For those tired of the holiday hustle and bustle, there was an alternative this weekend in Boulder City — attacking a Christmas tree.

As a stress reliever from the holiday pressures, Boulder City Parks and Recreation Department held its annual Christmas dodgeball tournament. It is a fun event designed to provide a getaway from the usual holiday season with a full-court attack on an opponent’s Christmas tree.

Teams of six competed in a usual dodgeball game, except each team had a Christmas tree on its side to protect. Teams could either go the traditional way of knocking out players one at a time, or they could attack and knock the opposing tree off its podium for an instant victory.

“The holiday season can be somewhat overwhelming to many and this was just a fun, crazy event to relieve stress,” said Steve Corry, recreation coordinator for the city. “This was perfect for those tired of shopping and being in the malls. Everyone had a good time and the games were very competitive.”

Teams were allowed six players, four male and two female. The event combined elements of dodgeball and capture the flag.

Reindeer Love dominated the competition and defeated Money Team in the final by winning six of nine games. In only one game was Reindeer Love able to fire a direct shot to knock Money Team’s tree from its podium.

“We had to earn the wins with smarter play and aggressive attacks,” said Reindeer Love captain Brittney Ricardo. “We had some great athletes and fast runners who got just outrun by opponents for the balls and then we were pretty good at making the throws, too. It was a lot of fun.”

Although DJ got the best of sister Karlee and brother Peyton this holiday season, the siblings vowed a different outcome next year.

“They were just a little faster at getting to the balls, but we used a few different strategies and we won a few games, but in the end they were stronger,” Feeney said. “We will get them next year, for sure.”