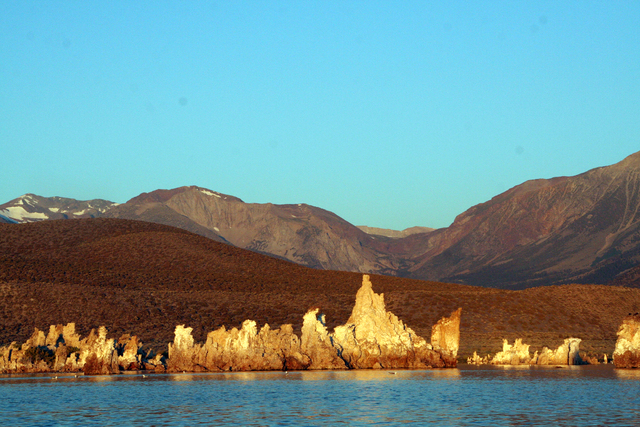 Just east of the Sierra Nevada range, near the small tourist town of Lee Vining, Calif., is one of the most unusual bodies of water you’ll ever visit. Mono Lake is one of the oldest in North America and has no outlet, and for the latter reason mineral salts have become so concentrated in the lake that fish cannot live in it. These high concentrations combined with other local conditions to form towers of tufa, extending high above the water surface and equally beloved by birds and photographers.

The combination is visually stunning. Seeing it should be on an outdoor lover’s regional bucket list. Summer is the most enjoyable time to go there. Furthermore, a summer visit to Mono Lake combines well with a trip to Yosemite National Park, for the road that constitutes the park’s eastern “back door” heads over the mountains from Lee Vining. But that road is strictly a warm-weather route, because it is closed by snowfall every winter.

The Mono Lake Tufa State Natural Reserve was established to protect the tufa towers and the sensitive habitats for the birds — 1 million or 2 million — that find their way here every year.

A good place to start a visit is at the Mono Lake Scenic Area Visitor Center, which lies a few minutes’ drive north of Lee Vining. Here are lake-viewing areas and exhibits and interpretive displays that explain how the tufa towers form.

Freshwater streams that enter the lake carry small amounts of minerals. Because the lake has no outlet, water escapes the lake mainly by evaporation, which leaves the minerals behind. Over many centuries the minerals become increasingly concentrated.

When freshwater springs feed into the lake below the surface, their calcium-rich waters mix with the carbonate-saturated and alkaline lake water, forming deposits of calcium carbonate. This common limestone then forms into a rare manifestation, tufa towers. These are formed only underwater, but now tower over the surface because the lake’s water level has dropped.

To get a close view of the towers head to the South Tufa area, identified on visitor maps and by road signs. Here you’ll find a boardwalk that takes you out to the lake’s edge. You’ll find interpretive signs along the way, but to learn more take one of the naturalist-led tours offered at 10 a.m., 1 p.m. or 6 p.m. daily through Labor Day.

The lake is 2½ times as salty as the ocean, yet people still swim in it, because they enjoy the novelty; the highly mineralized water makes their bodies more buoyant than they would be in freshwater or even the ocean. The swimmers I noticed getting out of the lake were covered with salt residue, which was funny to see. Navy Beach, a half-mile east of South Tufa, is the best place to swim.

Navy Beach is also the best place to launch a kayak or canoe. I brought my kayak the last time I visited and paddled out near the south tufas at dawn. Mornings are best as high winds often occur in the afternoons. With my binoculars I spotted a nesting pair of ospreys atop one of the tufas.

Other birds you might see include the California gull, eared grebes, and Wilson’s and red-necked phalaropes. Though no fish live in the lake, brine shrimp breed by billions, making a tasty diet for the birds.

This time of year, because it is nesting season, you must stay at least 200 yards away from the birds so they don’t feel threatened.

The lake is at an elevation of about 6,400 feet, so evenings in this region can be very cool. Dress and camp accordingly.

There are several ways to get from Las Vegas to Lee Vining and Mono Lake. I prefer to travel through Death Valley National Park to Lone Pine, Calif., and then travel along U.S. Highway 395 north, along the foothills of the magnificent Eastern Sierra.