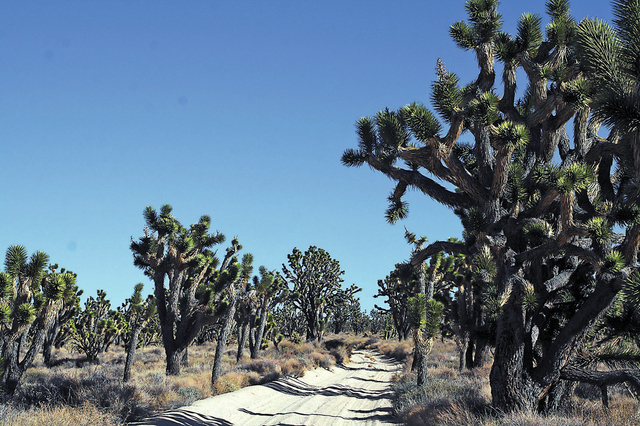 The moderate 4-mile round-trip trail takes you up to a steep outcropping on Cima Dome, at an elevation of 5,755 feet. The first section of the trail passes through the largest concentration of Joshua trees in the world. While you will be hiking on the geologically interesting dome itself, the dome is best viewed from afar to see its almost perfect symmetry, rising 1,500 feet above the desert.

From the signed trailhead, which is at an elevation of about 5,030 feet, follow the now-abandoned gravel road, toward the obvious granite outcropping to the southwest. The first part of the hike is fairly flat and easy, so children will enjoy it. But once you’re hiking up the outcropping, it becomes more strenuous and extremely rocky with uneven footing, unsuitable for small children.

In the first mile or so you will be surrounded by Joshua trees, remarkably odd but beautiful members of the lily family, with twisted, scaly limbs bearing long leaves only at their tips. They look like the fanciful trees in some children’s book by Dr. Seuss. Joshuas usually grow at an elevation between 2,000 and 7,000 feet, in sandy soil on flat or rolling terrain, so the foot of Cima Dome is one of their favorite places. Some along this hike are more than 20 feet tall. Other vegetation here includes yucca, cholla, blackbrush and Mormon tea.

After about 1 mile you will come across timbers and mine tailings, evidence of an old silver claim. Take a glance but stay away, as many old mines in the Mojave Desert are notoriously dangerous. Leave it alone and continue toward the outcropping.

Once up on the outcropping follow the faint path along the ridgeline as far as you feel comfortable. The summit is difficult to access without a lot of rock scrambling. Indeed, you won’t need to reach it to take in the best of the far-reaching views. To the west you will see the cinder cones and lava beds that are part of the Cinder Cone National Natural Landmark, designated in 1973, and within the confines of the park. A bit past that, if you look carefully, you can even make out the world’s largest thermometer in Baker, Calif. Beyond you can see the outline of the San Bernardino and San Jacinto mountains.

To the south you can see the Kelso Sand Dunes and to the north you can see Clark Mountain, the highest peak in the park, at an elevation of 7,929 feet. Clark sits just north of Interstate 15 near Mountain Pass.

While you are in the park, take time to head over to the Kelso Depot Visitor Center. The Mission Revival style former train station was built in 1924 by the Union Pacific. The restored depot building is now the park’s main visitor center and has wonderful displays about the early mining and ranching history of this area, as well as Chemehuevi and Mojave Indian tribes.

Although trains no longer stop here, they roll through about once an hour. It’s a thrill to watch them from the station platform, thundering past at what appears to be full speed. It’s perfectly safe to do so; a sturdy fence protects onlookers without obstructing their view.

The depot is open from 9 a.m. to 5 p.m. Fridays through Tuesdays, but closed Wednesdays and Thursdays. Its Beanery Lunch Counter is closed, so bring your own picnic supplies. There are picnic tables at the depot but just about any location along one of the hundreds of side roads in the uncrowded preserve offers an inviting spot to spread a tablecloth. Gasoline isn’t available in the park so before entering, be sure to fill up in Primm or nearby Baker.