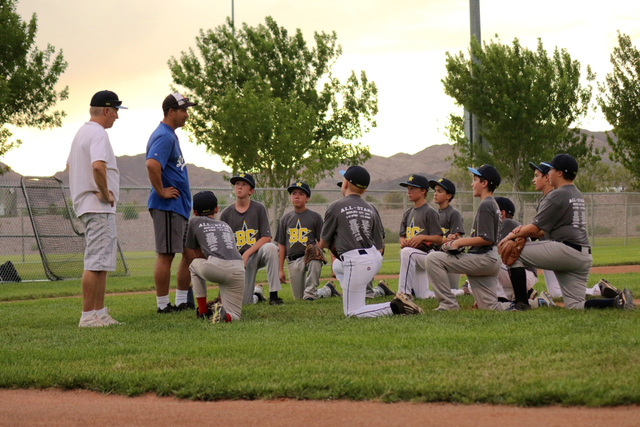 During the summer a lot of kids want to sleep all day, or watch movies, or just hang out with their friends.

Twenty-two Boulder City boys are hanging with their friends, but they have a purpose. They are heading to the Nevada District 2 All-Star Tournament, Little League baseball’s premier showcase for up- and-coming talent, which starts Monday.

The kids are ranked by age and Boulder City has two teams competing this year: one of 9- and 10-year-olds and another of 11- and 12-year-olds.

“We have more than 120 kids in Boulder City Little League and these 22 were chosen by the board of directors and the coaches to represent us in these tournaments. We are blessed to have some of the most talented kids I have seen in a long time,” said Chris Pingree, president of Boulder City Little League. “I have been associated with this program for seven years and watched my own kids go through it. That’s why I do it.”

Pingree, along with Lori Giunta, treasurer, and Jenny Davis, player liaison, recently stood beneath the shade in Veterans’ Memorial Park to watch the teams as they tuned up for the upcoming events.

Giunta, who was “drafted” 10 years ago as a member of the Little League board, said she has watched many of the children coming through the program “form lifelong relationships that continue all the way into their high school years. I believe in this program and what it does for these kids. We are so fortunate to have these facilities available to us. The sponsors and the city are just incredibly generous and our costs are so much less than other surrounding cities.”

Players were not shy about saying what the program means to them and said they gladly give up their time and efforts for a chance to excel and to learn the fundamentals of the game. Usually, they practice three or four evenings per week, starting at 7 and running until 10.

Many are multiple sports participants and, like Scott Bahde Jr., see sports as a “way of life.”

Scott, who just turned 13 and will be finished with this level after the upcoming tournament, said he is excited to move up to the next level of competition. He plays shortstop, pitcher and catcher on the older team and said the thing he feels he has learned the most “is to be always aware of my surroundings on and off the field.”

Preston Reynolds, 10, said, “It’s an honor to be chosen for this team.”

Preston, who started playing T-ball when he was 3 years old, is “kind of like a jock.” He wrestles and also plays football and basketball and will be starting sixth grade in the fall.

Coach Joe Camps is six years into his second stint as a coach for the Little League. Camps, who started coaching after he graduated from Boulder City High School and now works full-time in the construction industry, volunteers three or four days per week helping the teams “excel. They grow so fast and work so hard. They want to be the best at whatever they do. I see them come back later in life and see the way they have grown.”

All of the coaching staff, board of directors and staff members are volunteers. The Boulder City Little League is a nonprofit and each of the kids pays a percentage of his expenses. Playing facilities are furnished by Boulder City for a nominal fee and the teams and coaches said they are extremely grateful for the help.

Help sometimes comes from unexpected sources, such as a visit earlier this year by members of the world championship Mountain Ridge Little League All Stars. They spoke to the teams about their experience and challenged the players to be the best they can be.