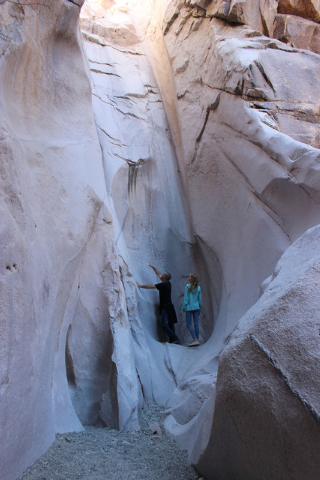 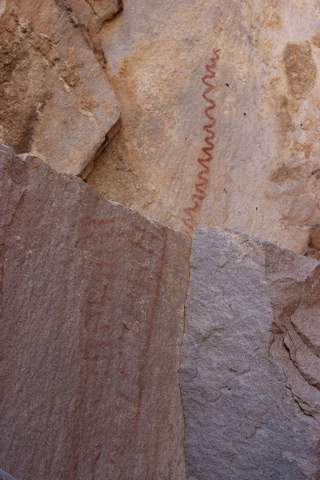 If you are looking for an easy outdoor excursion that might be pretty close to home, head just south of Boulder City to Keyhole Canyon.

A narrow canyon in the mountainside, filled with petroglyphs and a few pictographs, and culminating in a smooth dryfall, the place has a unique, romantic and almost magical feel. It’s a great place to spend a spring morning, and exploring the canyon itself is such an easy, short hike that just about anyone in your family can enjoy it.

The canyon is at an elevation of 2,854 feet in the western foothills of the Eldorado Mountains, and managed by the Bureau of Reclamation. A four-wheel-drive vehicle and good off-road tires will easily get you to the trail head at the canyon mouth. In mild weather, an experienced hiker can even get there on foot from the hard-surfaced road.

Keyhole Canyon itself can be hiked in only 15 minutes or so, but any additional time you spend viewing and photographing the rock art will be well-invested, paying off in memorable photos and vivid memories. The rock here is mainly quartz monsonite.

As you approach the canyon you will notice a dark coating on the cliff faces and boulders, which is called desert varnish. It forms over rock throughout the arid Southwest.

Much of the varnish is black but some has a more red patina. It is composed of clay particles with the addition of iron and manganese oxides, as well as trace elements. Rocks covered with varnish are the most common locations in our region to find prehistoric American Indian petroglyphs.

This kind of art was made by pecking away the varnish with some hard object, exposing the lighter color underneath. Most of the glyphs here are abstract, ranging from simple lines to complicated symbols, although you will find recognizable figures such as human forms, bighorn sheep and lizards.

The best place to see them is at the mouth of the canyon just yards from the parking area. Bring binoculars to get a good look at those panels that are located high up on the cliff walls.

Once within the mouth of the canyon look around among the large boulders on the south side, and you will also find a few pictographs. These were painted on the rock, and those that remain today are found in protected areas such as overhangs and other areas protected from weather by the boulders. In this canyon, they were painted with red ocre, a natural clay pigment.

Rare sights you will find here are cupules. They suggest small, a few inches or so, circular scooped-out cups for ice cream. I have seen them on tops of boulders near the parking area on the left side of the canyon. It is said they were used for ceremonial purposes by American Indians.

Do not climb on or within 100 feet of any rock art. Also, it is important to remind everyone in your group not to touch the rock art as the oil from our hands will damage them.

This time of year, rattlesnakes are out and about, so remember to never put your hands or feet anywhere you haven’t looked first.