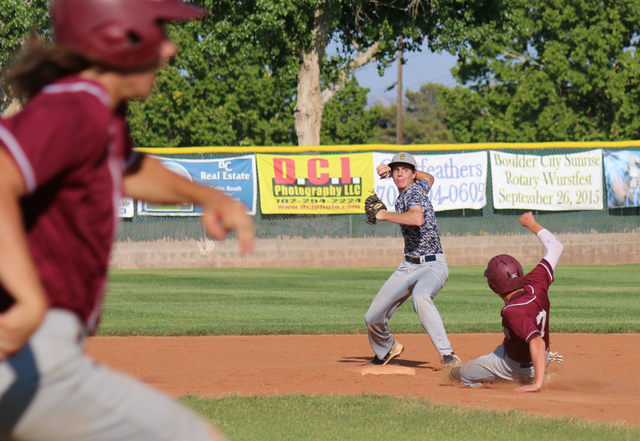 As the Boulder City Connie Mack summer league 18 and under team continues to work on its game, players are able to see parts of the field that they wouldn’t normally see during the regular season.

Recent graduate Austin Shepard has seen some time on the mound and, for the first time in his career, has played on the field with younger brother Colin.

Nolan Desantis and Austin Wishard also have tried their hand at pitching. Boulder City’s varsity and junior varsity players are moving around to improve their skills in every aspect of baseball.

On June 25, Boulder City traveled to Arroyo Grande to play the Foothill Falcons, where they lost 5-2. Shepard was 1-for-3 at the plate with one RBI, while Steven Mull had one RBI and was 2-for-3.

Boulder City lost the first game 7-1. Desantis was 1-for-3 with a RBI.

Wishard and DJ Reese each had one RBI. Van Diest went 2-for-3 and Zach Murphy went 1-for-3, each with one RBI.

Wishard was 2-for-4 at the plate with three RBIs; Desantis had one RBI.

Results from Wednesday’s games against the Summerlin Panthers were received too late to be included in this edition.

The Las Vegas Bengals travel to Boulder City on Friday for a 7 p.m. game against the Eagles.