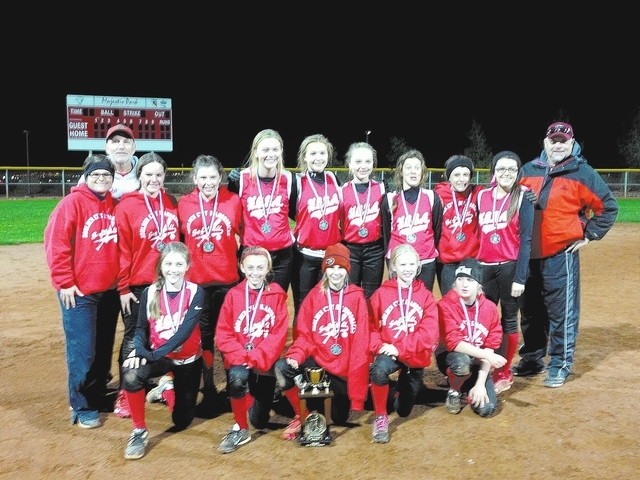 The same girls, now ages 11 and 12, have been playing together for eight softball seasons, four in the spring and four in the fall.

“We are very proud of the young ladies — it was a complete team effort,” head coach Angelica Moorhead said. “We have come a long way from winning only two to three games a season when we first started as a group in the spring of 2011. The girls have worked hard and stuck together.”

After posting their first winning season last spring during the regular season, the Diamondbacks took second place in the spring tournament.

“We just lost momentum going into the final game, but it left the girls hungry and wanting to improve,” Moorhead said.

The Diamondbacks finished the regular fall season 11-­1 and entered the postseason tournament as the No. 1 seed. The team advanced to the championship game unbeaten and needing only one victory in the double-­elimination tournament. But after a 2-­1 loss, they were extended to the final where they won a winner­-take-­all game.

The game was filled with controversy and excitement with the D’backs entering the bottom of the sixth and final inning trailing 5­-2. The Diamondbacks managed to score three runs and tie the game 5-­5 to force a tiebreaker inning. Then the D’backs scored one run and won the game and the tournament

It was a farewell tournament for Moorhead, who has resigned as the Diamondbacks’ coach because she will be coaching the varsity team at Boulder City High this spring.

“I would like to extend a big thank you to the players and their parents for a great experience the past few years,” Moorhead said. “I have enjoyed working with these wonderful young ladies and look forward to seeing them on the field playing for me at the high school level.”

The Diamondbacks were coached by Angelica and Bill Moorhead, Scott Hinson, Billy Jordan and Robert Herr.