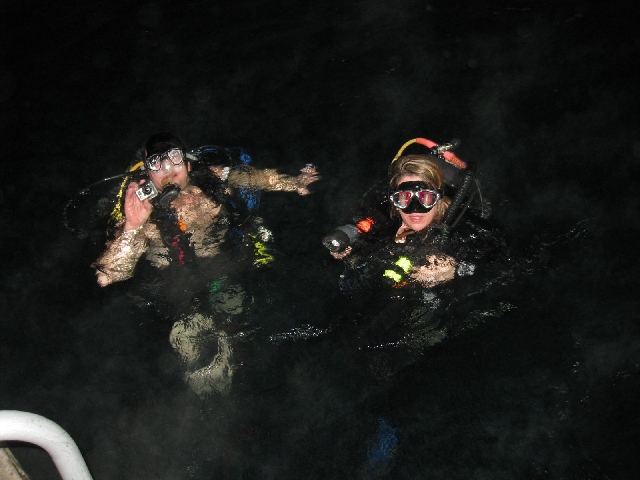 The Fourth of July was only days away and Charlie and Holly Franks were busy dealing with more than 140 customers. It may be a small shop by square footage, but Scubafy Dive Center is packing them in for several reasons.

Some come to the store to learn to “Dive with the King” after seeing instructor Charlie Franks perform as Elvis Presley in one of his shows. Some come to buy the latest diving gear, and most come for the scuba classes and certification.

But all are seeking underwater adventure at a place with a friendly atmosphere.

Franks operates the shop, at 1402-C Nevada Highway, along with his wife, Holly, two full-time workers and several interns. On the final Saturday of June, Scubafy surpassed 525 active students for the month — the fifth consecutive month with more than 500 active students — making it one of the largest and busiest scuba dive centers in the country, according to Charlie Franks.

“Last year, we certified more than 300 divers through our shop, and that’s quite a number,” said Charlie Franks, who is certified as an instructor, evaluator and regional trainer of other diving instructors.

“Most dive shops in the U.S. average about 100 dive students a year and, of those, about 25 get certified. We are running three classroom classes six days a week,” he added.

“We do it old-school, where you have to attend the classes in person and then dive with a certified instructor. We don’t rush anyone; they can go at their pace.”

Students can attend on any day or session that their current class is being taught.

To be certified by Scubafy and its certifying agency, International Diving Educators Association, students must complete all four parts of the course, usually for a cost of $299. Charlie Franks estimates that as many as 40 of his former students are now instructors.

The first class covers equipment and its use and care. Class two covers the physics and physiology concerning underwater pressure and depths, such as how to avoid trouble and how to react in case of trouble. The third class discusses the marine environment and diving in different locations such as shores, sunken boats and open water. The final class covers depth and time limits, and the safe planning of dives.

“We are a very social shop where people drop by to talk about diving and other things,” Holly Franks said. “We want to (stay) that way. We like people to come in and stay a while.”

“The reason we are old-school is because it is the way it should (be), people interacting with others, talking diving and, of course, about Elvis,” Charlie Franks said. “Many other shops nowadays, teach through e-learning, DVDs and self-study courses. I call that cyber diving. You don’t get as much out of it and, as an instructor, you don’t get to know the people and know when they are comfortable.”

Franks previously owned dive shops in Bradenton, Fla., and in Phoenix. He moved to Boulder City in 2010 and incorporated Scubafy in 2011.

The name Scubafy was the Franks’ idea. “Why get certified when you can get Scuba-fied,” is the shop’s motto.

Charlie Franks is known for his Elvis tributes and for running an advertisement in newspapers and magazines that invites people to “Dive with the King.” Scubafy’s red diving flag has a silhouette of Elvis Presley on it.

Franks previously headlined the show “2 Kings: A tribute to Elvis and Michael Jackson” at the Rio. When he isn’t diving or teaching divers, he can be found on stage performing as Elvis.

But even if people are drawn to the store by his Elvis persona, he takes the diving class instruction seriously because diving is serious business. Two people have died at Lake Mead while diving in the past year.

For more information on diving with the King, or about scuba diving, Holly and Charlie Franks can be contacted at www.scubafy.com or 293-2021.