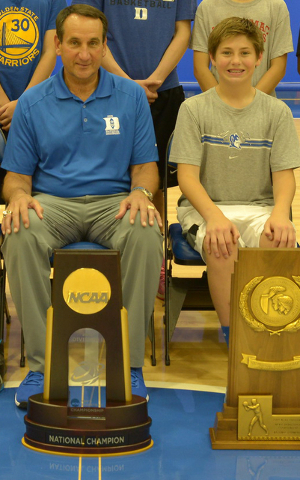 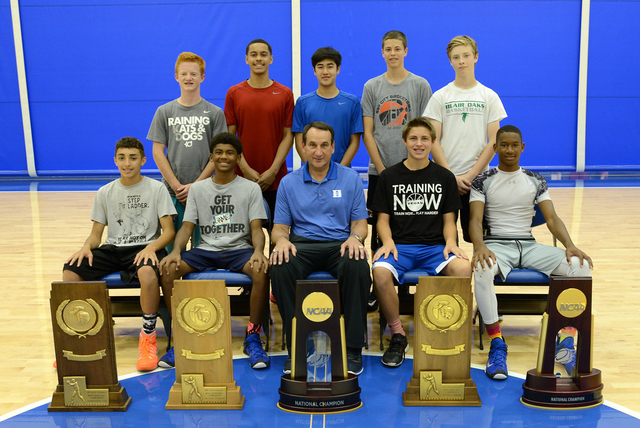 This summer, Boulder City’s young basketball players hit the court with the NCAA champions at the Duke Basketball Camp.

Held at Duke University, the five-day camp allows basketball players from the ages of 9-17 to sharpen their skills with drills, stations, games and tips from collegiate and NBA-level players.

Balistere said he hopes his players get a lot more out of the camp than just basketball.

“I think it’s good for them to get so many different angles of the game from all the different coaches, ’cause obviously we all have a different philosophy and perspective on it,” he said.

His son, Carson, attended the camp for the eighth time this year. Carson said it’s the best thing ever to be able to interact with all the players and coach Mike Krzyzewski.

“I just take away that I get better, and I become a better person by all the speeches and how the players come out and talk to you and they’re like, ‘You need to do this if you want to be successful,’ and that just really hits me right in the heart,” Carson said.

But for Carson the most memorable moment came when Krzyzewski pulled him aside and told him that he wanted Carson to sit next to him in the picture with Duke’s five national trophies.

Every team, which is divided by age, got to take a picture with Krzyzewski and the trophies this year, instead of just getting autographs as in prior years. This year, they had to retire autograph sessions because of abuse by people not affiliated with the camp.

John Balistere said he believes the Duke Basketball Camp is the greatest camp in the country. Between the hands-on work and the involvement of Krzyzewski, he said the players get so much out of attending.

Montgomery experienced the camp for the first time this year, and said he took home some important life lessons, including many from former Duke player Nolan Smith, who spoke to the players. Montgomery said the things he learned from Smith are the most memorable from camp.

Even though the Balistere brothers were on separate teams, they said they enjoyed being able to share the experience with one another.

“I like being there with my brother,” Carson said. “It’s kind of cool to watch him play and interact with kids his age.”

Besides enjoying the camp with his brother, Gavin said he loved being able to meet and experience camp with kids from all over the United States. This was Gavin’s fifth year attending.

John Balistere has worked the camp for 14 years, helping the team of the oldest boys at different drill stations.

“Certainly as a dad, it’s pretty awesome to be there with your boys,” he said.

The Balistere family has known Krzyzewski for 16 years, and John Balistere said he finds himself stealing some of his coaching tactics to integrate into his own coaching.

“I steal stuff all the time from Coach. If you’re going to be a good coach, you have to put your ego to the side,” Balistere said. “The relationship with your players has always been the most important thing to me, and I think Coach has taught me a lot of good ways to connect and kind of complete the circle with your players to get the most out of them.”