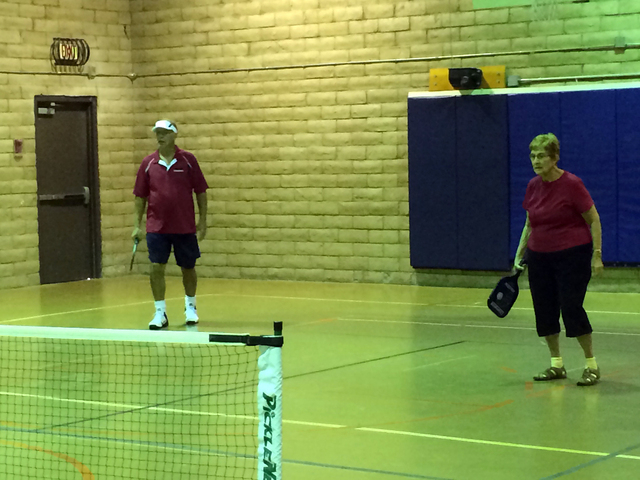 According to the USA Pickleball Association, the sport started during the summer of 1965 on Bainbridge Island, Wash., at the home of Joel Pritchard, who served in the state and national House of Representatives. He and friend Bill Bell returned from golf and found their families bored. There was an old badminton court, but they could not find the equipment. They improvised with a Wiffle ball and created paddles of plywood from a nearby shed. Once they saw how well the ball bounced on the court’s asphalt, they lowered the net.

The following weekend, their friend, Barney McCallum, was introduced to the game and the three began writing rules.

The rest, as they say, is history.

Some say that pickleball was named for the Pritchard family dog, including McCallum, who said the Pritchards’ dog, Pickles, would chase the ball and run away with it, according to the association’s website.

But, the USAPA quoted Joan Pritchard saying she started calling the game pickleball because it “reminded me of the pickle boat in crew where oarsmen were chosen from the leftovers of other boats.” The dog, which joined the family about two years after pickleball was created, was named for the game.

Since those early days, the game has become a staple for gym classes around the country and caught on with adults, who according to Rick Johnson, USA Pickleball Association ambassador and Boulder City resident, were looking for a game that was “quick to learn and hard to master.”

Having just been named the Boulder City Parks and Recreation pickleball ambassador, Johnson would appear to be the “go-to guy” for all things pickleball. He can be reached at 702-272-9650.

He holds clinics to teach the game and participates on a national level. He is starting to form leagues and trying to get people interested in the game, much like our neighbors to the north in Henderson.

“Lots of courts and several teams are starting up around Henderson and Las Vegas. Many of those games are being played indoors, which means people can play year-round,” Johnson said.

Pickleball is played on a court 44 feet by 20 feet and marked off much like a tennis court. It is played with what appear to be oversized pingpong paddles and uses a Wiffle ball. Teams take turns serving and only the serving team can score a point. The first team to reach a previously agreed upon score wins.

Pickleball can be played by those of any skill level and is particularly popular with retirees.

Renee Keele was an avid line dancer, however she gave up one of her line dance sessions because it interfered with pickleball. Keele, Mayor Roger Tobler’s mother-in-law, said she started playing about four months ago and loves it.

The Boulder City Parks and Recreation Department held workshops in May, and Johnson will be holding free clinics the second Saturday of each month at the ABC Park, 801 Adams Blvd. Monday’s group play and games begin at 9:30 a.m. and Saturdays it is scheduled from 1-3 p.m.

The only age requirements for pickleball is that players be at least 8 years old. Paddles and balls are available at ABC Park, where there are three courts, one of which is indoors, Johnson said.

“As a desire to play pickleball becomes more prevalent in our community efforts will be made to find space,” said Patty Sullivan, recreation program director for the parks and recreation department.