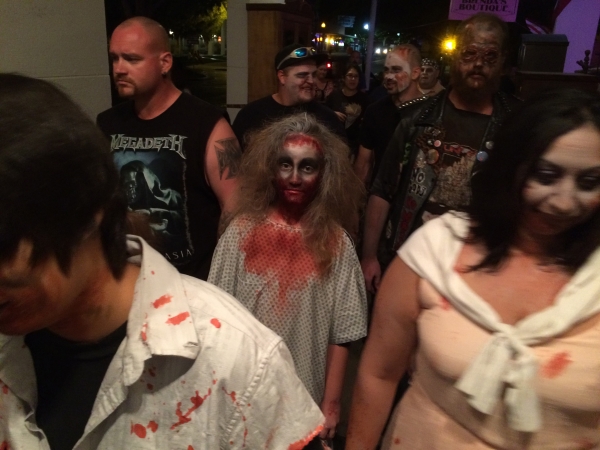 “Darkness falls across the land/the midnight hour is close at hand. Creatures crawl in search of blood/to terrorize your neighborhood.”

Arguably the most famous song of Michael Jackson’s illustrious musical career, “Thriller” will take over Boulder City on Saturday when the fifth annual Zombie Walk takes place at the Boulder Dam Brewing Co.

The walk of the living dead was started by the Zombie Squad five years ago when the Las Vegas chapter approached Todd Cook, owner of the brewpub.

“I’m already a big fan of zombies, so I thought it’d be a great idea,” Cook said.

Cook said that the former president of the Las Vegas chapter was a regular customer at his establishment, and when Cook found out what the squad was about, he decided to join.

Cook says he believes in self-reliance and always being prepared for Armageddon, but that he also liked the similarities in charitable work between the organization and the brewpub.

The Premier Mobile Cadaver Suppression Unit, as the members jokingly refer to themselves, helps raise money for charities by putting on such events around Las Vegas and in Boulder City.

According to its website, the squad also informs people on the importance of personal preparedness and self-reliance.

Different charities have benefited from past Zombie Walks, with St. Jude’s Ranch for Children receiving the proceeds the first two years, and veterans charities receiving them the past two.

Proceeds from this year’s walk, which begins at 7 p.m. and requires a $5 donation, will go to Safe Nest, a domestic violence charity that provides shelter, counseling, advocacy and prevention for women.

There are also raffle tickets that will be available for a range of products; raffles vary in price from $1 to $5 according to the value of the prizes and all of those proceeds go to Safe Nest, as well.

Finally, a dollar of every beer sale will go to the Zombie Squad, he said.

“All the money that comes into the Zombie Squad goes out,” Cook said. “None of the members are paid and there’s no stipends. It would be seed money for our next fundraiser event.”

Mobile and immobile corpses, as well as zombie hunters of all ages are invited to attend and walk during the event. The route takes the living dead through Boulder City’s historic district, before coming back up Nevada Way to the brewpub.

The fun doesn’t end after the walk, as the brewpub will have live music.

Water Landing and The Perks will make their first appearance at the Zombie Walk while The Legendary Boilermakers will be returning from last year’s event. The three bands will perform on the patio area right outside of the establishment’s main entrance.

“The great thing about the bands is they donate themselves as well,” Cook said. “They donate an hourlong set and it’s neat to see a band come out and play for free. We’re not paying the band out of the proceeds brought in. The whole thing goes to charity.”

In year’s past, makeup artists have been on site, but as Cook says, they have proven to be less than reliable. This year, Cook is encouraging everyone to “come already dead.”

“You can get people of all ages involved in something in downtown Boulder City that you just can’t do in Las Vegas,” he said. “It’s just a different feel out here.”