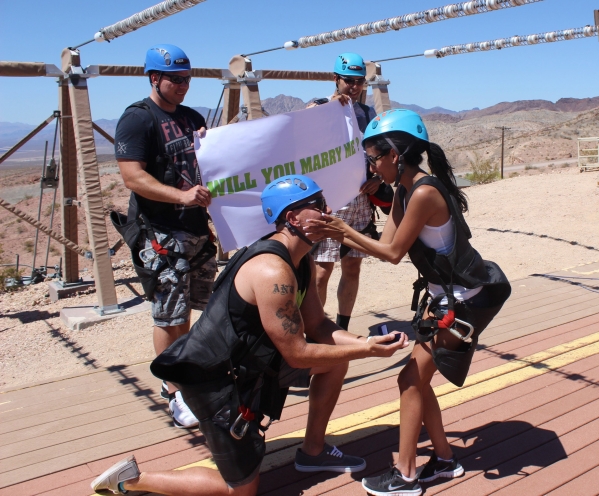 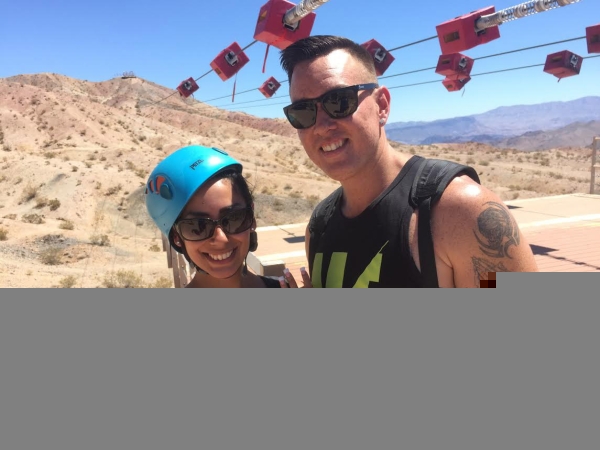 Anthony Hall’s adrenaline was running at full speed Saturday morning as he finished his fourth Flightlinez run at Bootleg Canyon.

It was Hall’s first time on a zip line, but the real nerves came from the proposal he spent three months orchestrating for his girlfriend, Elke Orona.

Both Hall and Orona live in San Diego, but a group of their friends came with them to Las Vegas for a weekend getaway. Unbeknownst to Orona, her life would forever change as she made her way down the last zip line run.

That’s where two of their friends held a 4-foot long sign with the words “Will You Marry Me?” in green letters as Hall got down on one knee with a ring in his hand. Orona, still in her zip line seat as crew members helped get her down, put her hands over mouth in surprise.

The couple said they met on Tinder and had been together for about a year before Hall popped the question at Bootleg Canyon. He kept the ring tucked in his pocket during all four runs, checking it after each one to make sure it hadn’t fallen out.

“I was actually fine until about three or four days ago,” he said with a chuckle. “Then it started hitting me, and I was getting really anxious.”

“We’ve been talking about it for a while,” she said of Hall’s proposal. “I just knew he was the one. I said ‘I love you first.’ “

“It only took her two weeks,” Hall said with a laugh.

Now that the two are engaged, Hall said he can finally put his nerves behind him.

“Now I can breathe. I just wanted everything to go well and it did. It went perfect,” he said. “I knew she was going to say yes. I wouldn’t have gone through all this if I wasn’t sure.”