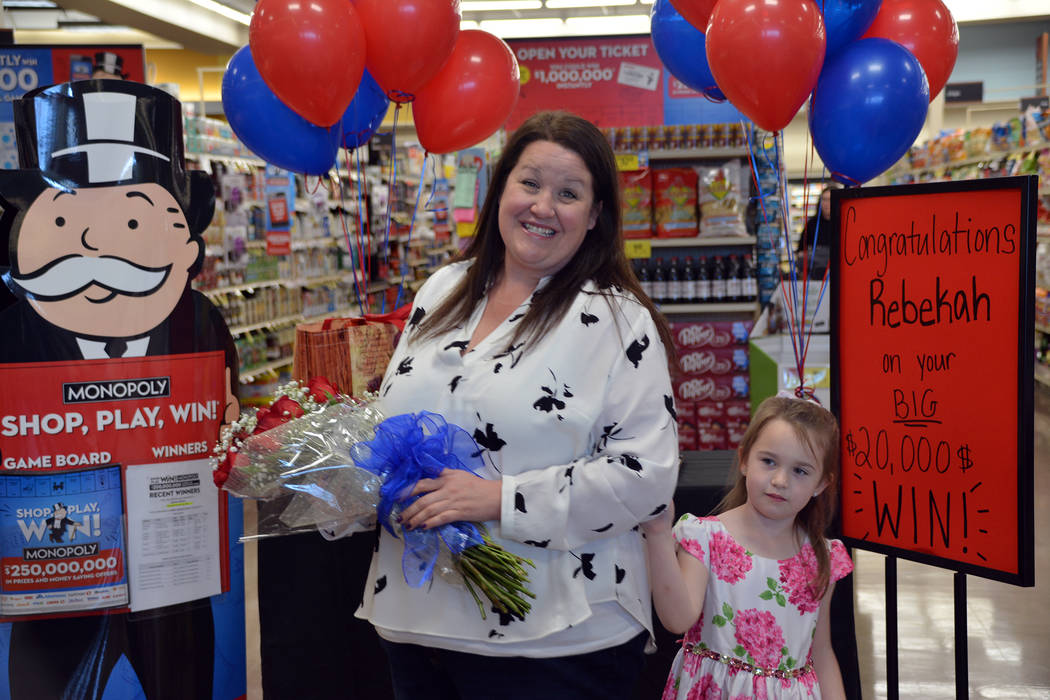 That’s what a single Albertsons Monopoly game ticket was for Boulder City resident Rebekah Ziembicki when she won $20,000 cash in the nationwide contest.

“I was in shock. It’s amazing,” she said after finding out she had a winning ticket.

Albertsons holds its national Monopoly contest every year. Customers receive tickets after purchasing items in the store. The tickets allow them to win or be eligible to win a variety of prizes. This year is the 13th year of the contest, and there are 13 chances to win a $20,000 cash prize, according to Nancy Keane, media relations for the grocery store chain.

Ziembicki won the $20,000 with a single online ticket. She said for every ticket she receives that is not a prize, she enters it online because that provides a second chance for her to win something.

“I’ve done it for the two years I’ve been here,” she said. “I won five dollars last year. This is a big step up.”

Ziembicki is a single mom who grew up in town and graduated from Boulder City High School. After graduation she moved away until two years ago, when she came back to live with her mother, Kim Ziembicki. Her mom was recently diagnosed with breast cancer and has been out of work since January.

“We’ve been helping each other out,” she said.

She said she plans to use the $20,000 cash prize to pay off some of her debt, go on a trip or two and save some money.

“This is helpful for Rebekah and for us. … I’m just so happy for her,” said Kim Ziembicki. “She can pay down her bills and feel more comfortable.”

In addition to taking care of her mother and 6-year-old daughter, Grace Merker, Rebekah Ziembicki works as a teacher at Christian Center Day Care and takes online classes at College of Southern Nevada.

“I’m eventually going to be a nurse,” she said.

On March 11, Boulder City’s Albertsons presented her with the cash, a grab bag of gifts and a cake during a short ceremony, which she described as a “whirlwind.”

Several managers from the chain were on hand for the presentation.

“It’s pretty cool (to be here) because this is such a great community,” said Justin Davis, district services manager.