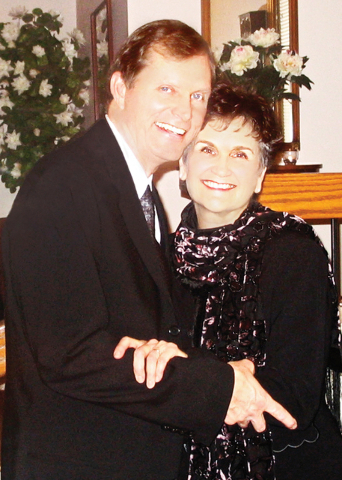 Bruce and Rose Woodbury have many blessings in their life and things to be grateful for, among them social protocol.

As a candidate for junior prom queen at Las Vegas High School, Rose needed an escort.

Naturally, she had seen Bruce around campus. In fact, they had attended the same schools all their lives. But she was shy.

So she told the class president about her interest in having him serve as her escort, and he, in turn, told Bruce, who wasn’t quite as shy.

They were 16 at the time and have been together ever since.

Three years later, they married and now have seven children and 22 grandchildren.

Together, they have served the community in many ways, especially in their beloved Boulder City, where they moved in 1978.

The Woodburys will be honored at the annual Heart of the Community Gala on May 8 to benefit Boulder City Hospital.

“They are special because they are such givers to our community,” said Christine Milburn, co-chairwoman of the gala and secretary of the hospital’s board. “They are just two people who deserve to be honored for the work they do in Boulder City and with our hospital.”

Individually, the two have received numerous accolades and honors for their work throughout Southern Nevada.

Bruce, a partner with the law firm of Jolley Urga Wirth Woodbury and Standish, was a Clark County commissioner for 28 years, serving as chairman for much of that time, as well as serving on the boards of the Regional Transportation Commission, Las Vegas Valley Water District, University Medical Center, Boulder City Hospital and Las Vegas Monorail Co.

He was the first chairman for the Regional Flood Control District, Clark County Air Quality Management Board and Southern Nevada Regional Planning Coalition. He said he is often referred to as the father of flood control or transportation czar.

Rose, the volunteer executive director of the Red Mountain Choir, was named Nevada’s Mother of the Year in 2011 and serves as president of the women’s relief society at her church. Additionally, she has been involved in many organizations while raising her children.

“We had been asked in years past but always said there were other more-deserving people,” Bruce said.

Milburn said she had to beg them to reconsider. “They are both very humble and we were thrilled when they said it was OK to honor them. They have been putting it off for a couple of years.

“Bruce sits on the board of the hospital and has also done so much to help the hospital to develop or to assist our hospital with any legal issues.”

The Woodburys said they reluctantly agreed to be this year’s honorees by the hospital because “it is so important to us and the community,” Rose said, adding that it’s also special to be honored as a couple.

Presented by the Boulder City Hospital Foundation, the gala will begin at 5:30 p.m. with a reception and cocktails, followed by dinner at 6:45 p.m. It is being held in the grand ballroom at Green Valley Ranch Resort.

Milburn said there were so many people who wanted to attend, it was necessary to move the gala to a larger facility.

In addition to honoring the Woodburys, the evening’s festivities will include silent and live auctions.

Live auction items include a Del Mar, Calif., racetrack experience with airfare, three-night stay and paddock access; a New Orleans experience with airfare, three-night stay in the French Quarter, VIP admission to Preservation Hall and a brunch or three-course dinner with wine pairings at Commander’s Palace; five-night stay at the Hyatt Ziva in Montego Bay, Jamaica, with airfare; a helicopter ride with Metropolitan Police Department’s SWAT unit; a birthday party hosted by the Las Vegas Fire Department; and a week’s stay in a villa in San Miguel de Allende in Mexico.

Among the silent auction items are one-night stay in Hotel Palomar Phoenix with dinner and cocktails and four tickets to an Arizona Diamondbacks’ game; a two-night getaway to the Boulder Dam Hotel with breakfast and a 90-minute helicopter ride over Hoover Dam; a beer tasting party for 20 at the Boulder Dam Brewing Co.; and a Champagne brunch for two with Lake Mead Cruises.

Christian Kolberg will serve as auctioneer, and Sue Manteris will be the program’s emcee.

A new feature this year is GiveSmart, which allows you to keep track of your bids on your cellphone.

According to Milburn, those who don’t have a cellphone, or who don’t want to use their personal phones, will be assisted by personal shoppers, who will track items they are bidding on and let them know if they are outbid.

Additionally, those who cannot attend the gala but wish to bid on silent auction items can register on the hospital website, www.bchcares.org, and use the GiveSmart program to participate. It will be operational one week before the May 8 event.

Proceeds from the gala help support the hospital and assist with projects such as the recently completed surgical unit and inpatient dialysis additions.

The Woodburys are the sixth recipients of the Heart of the Community award. Past recipients are Bob and Linda Faiss, Dr. Florence and Gard Jameson, Ralph and Sara Denton, Vern and Darlene Burk and Bob Ferraro.

Reservations are required by May 1. Make checks payable to the Boulder City Hospital Foundation and send them to 901 Adams Blvd., Boulder City NV 89005.

For information or reservations, call the foundation at 702-293-0214 or visit www.bchcares.org/foundation.