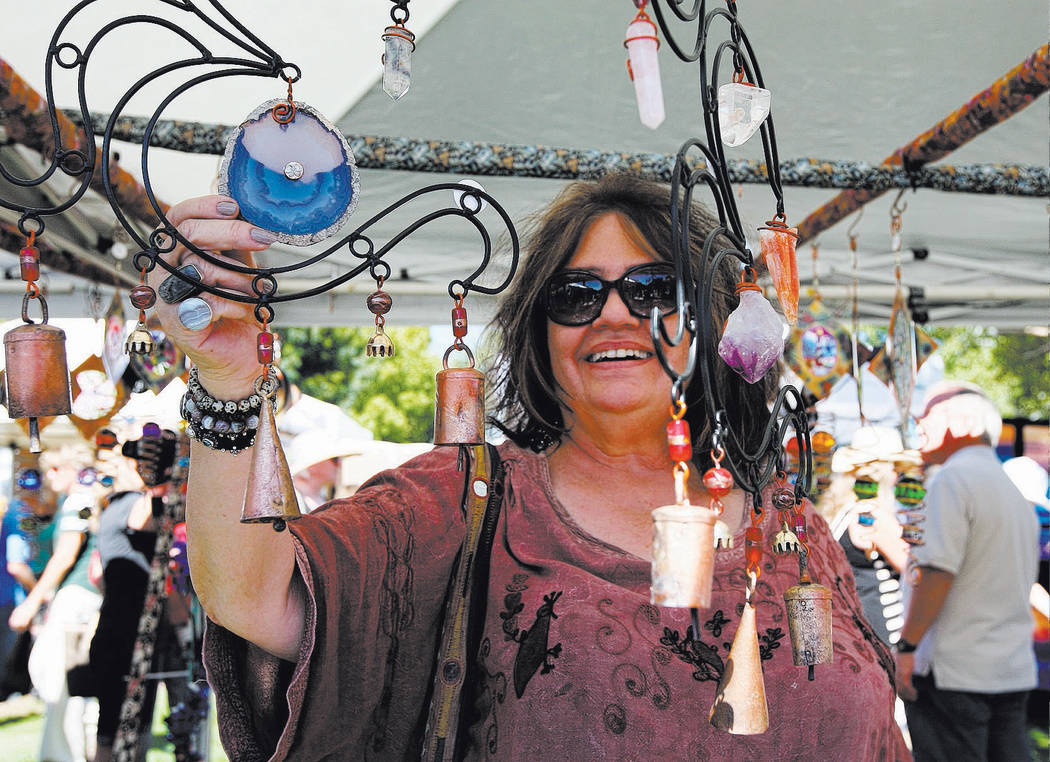 File Kay Koning looks at handmade wind chimes during the 2017 Art in the Park festival in Boulder City's downtown parks. This year's festival will be held from 9 a.m. to 5 p.m. Saturday and Sunday.

Boulder City Hospital’s 55th annual Art in the Park fundraiser this weekend gives attendees the chance to have a great time and enjoy the work of hundreds of artists.

“It is a long storied staple of Boulder City and the Boulder City Hospital, and it generates a bunch of bucks for us,” said Tom Maher, the hospital’s CEO.

Art in the Park is Boulder City Hospital’s largest fundraiser of the year and takes place in downtown Boulder City at Wilbur, Bicentennial, North Escalante and South Escalante parks. It’s free to attend and runs from 9 a.m. to 5 p.m. Saturday, Oct. 6, and Sunday, Oct.7 .

Maher said that since the nonprofit hospital is the only one in the state not part of a larger network, fundraising is important. He hopes to net north of $200,000 from this year’s event.

Art in the Park will have 331 vendors selling original fine art, fine craft and traditional crafts. For food, there will be 17 vendors selling a variety of dishes, including Japanese cuisine and barbecue. There will also be a place to get beer and wine.

This year’s featured artist is Richard Curtner of Palm Springs, who creates word collages from magazines. He said every image used he cuts out by hand from donated magazines. He does not create any of the images from a computer.

“It’s all done with an X-Acto knife, glue and varnish,” he said.

Curtner said he shows his art all over the country and started participating in Art in the Park about 10 years ago after some friends recommended it to him.

This year is his first as the featured artist.

“It’s always new,” said Maher. “The lineup for artists is always changing. … We follow the same format every year, but the people change and bring new things.”

SOS Radio, a contemporary Christian music station in Las Vegas, and Operation Christmas Child will also be at the festival.