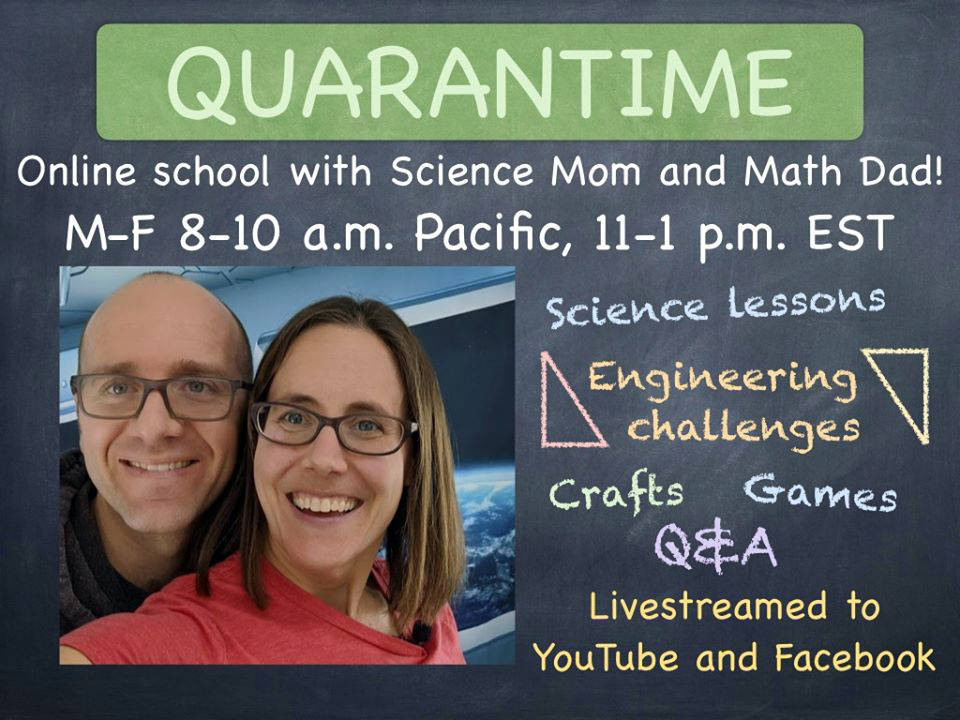 Science Mom Science Mom, Jenny Ballif, and her husband, Serge, or Math Dad, have started a daily live show called "Quarantime" to give students something to while schools are closed.

An idea to help out a friend whose kids were stuck at home from school has turned into a viral sensation for Boulder City’s Science Mom Jenny Ballif.

For the past few years, Ballif has been performing live experiments for children and posting weekly YouTube videos. Recently, she decided to do something different and host a live daily show, “Quarantime.”

“I decided to do it because I have a friend in Utah who said the schools there were closed. … If you’re working from home, and your kids are at home all day, it’s extremely difficult,” she said.

She said she made the initial announcement on March 14, right before Gov. Steve Sisolak closed the schools in Nevada. At the time, she had about 700 subscribers to her Science Mom Facebook page. Now, she has more than 70,000. The first episode of “Quarantime” has been viewed more than 50,000 times. She also more than 25,000 subscribers to her YouTube channel.

“The outpouring of support has just been unbelievable,” she said.

Each episode of “Quarantime” includes a science lesson, math activities, interactive games, stories, crafts and an engineering activity. She hosts the show with her husband, Serge Ballif, who is a mathematician known as Math Dad.

In addition to providing activities for children, the show builds community with the viewers while everyone is stuck at home.

After each show, viewers can post pictures of their projects to Instagram with the hashtags #quarantime and #sciencemomsquad, so everyone can see what each person created.

Jenny Ballif said a recent engineering activity was to create a Lego boat and she was able to see many different ones created by viewers.

“It’s just amazing to see the creativity and see what people are doing,” she said.

In addition to the lessons and activities, the Ballifs take time at the end of each show to answer questions submitted by viewers.

Science Mom and Math Dad host the “Quarantime” live show from 8-10 a.m. Monday through Friday. To watch it live and see past episodes, go to http://www.facebook.com/TheScienceMom or http://www.youtube.com/sciencemom.

Questions can be sent to questions@science.mom.

Jenny Ballif said she plans to do these videos for the next four weeks and will reassess continuing them, depending on what happens with COVID-19.