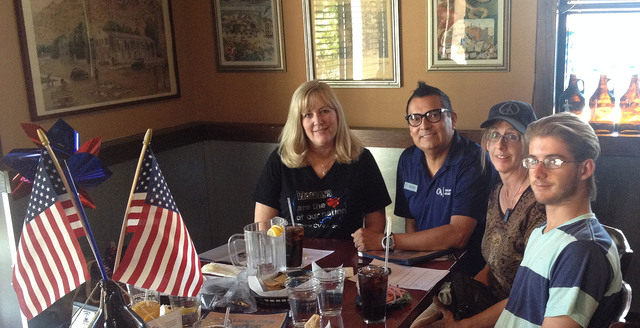 Long before the Veterans Affairs scandal flooded the national news in May, Boulder City resident Leo Garcia knew something had to be done.

As an eight-year veteran of the U.S. Air Force who served in the Gulf War, Garcia joined Concerned Veterans for America in October. The nonprofit and nonpartisan group strives to advocate for policies that preserve the freedom and liberties for the veterans who fought to protect them.

When he isn’t working 40 hours a week as a limo driver for Bellagio, Garcia spends 40 hours a week making phone calls, knocking on doors and working on social media to help promote the organization’s message.

And every Thursday from 3-6 p.m., Garcia and other volunteers can be found at the Boulder Dam Brewing Co. making phone calls to about 3,000 people around the Las Vegas Valley asking them questions about veterans. There are about 580 volunteers for the group in Southern Nevada.

“There are suicides every 64 minutes with our veterans suffering from PTSD (post-traumatic stress disorder),” Garcia said. “It’s horrific how these veterans are being treated.”

Garcia related a story of a young soldier who had returned from serving in the Middle East. The soldier was suffering from PTSD and went to the VA for treatment. The VA told him he couldn’t get help for another 90 days.

“They just said, ‘Here are some meds, and come back in 90 days,’ ” Garcia recalled. “He went home and shot himself. And those are the stories we’re hearing every day.”

Garcia said the main objective of the organization is to help American veterans get the care they deserve, something that the United States still has a severe problem with.

Jill Moe of Henderson has been volunteering with the organization since November. Her grandfather served in World War I, and her dad and uncle both served as well. She knew that she wouldn’t be able to make a difference if she wasn’t proactive.

“I thought it was just a travesty. There are people who have risked their lives, who have lost limbs, lost their eyesight and lost mental stability, and they’re not being taken care of by our country. It really hurt me,” she said. “Instead of yelling at Fox News, I wanted to go out and do something.”

Like Garcia, Moe said she heard numerous stories about veterans who were being neglected by the VA, some waiting as many as four years to finally hear back from them.

“That’s just inexcusable,” she said. “That should never happen to the veterans of our country.”

In April, Garcia was appointed with two others by Nevada State Director Bob Reiter to go to Washington, D.C., to get sponsors for House Resolution 4031, also known as the Department of Veteran Affairs Management Accountability Act. Garcia met with members of Congress from across the country in an effort to hold senior management in the VA accountable for poorly performing managers.

The bill, which was sponsored by Rep. Jeff Miller, R-Fla., garnered 152 co-sponsors. It passed in the House of Representatives with a vote of 390-33 on May 22.

Garcia described his experience in Washington as “one of the most surreal experiences in his life.”

“In 48 hours, we had 200 appointments to meet with congressmen and senators,” he said. “You know, you see the senators and the congressmen on television, and you’re sitting right across the desk (from them), and I’m like, ‘Wow. I never thought I’d be in a position like this.’ ”

Garcia was joined by 60 other veterans across the country during his Washington trip. He said the brotherhood they shared and the fact that they accomplished what they set out to do was the most rewarding part for him.

“I had the opportunity to have this bill passed, and it’s something I can tell my grandchildren,” he said.

Once President Barack Obama signs H.R. 4031, it officially becomes a law. Garcia is confident they’ll get the signature within the next few weeks.

Garcia also had a message for those people wondering how they can help make a difference.

“Get out and vote. Be a part of those grass-root efforts, because I helped make history,” he said. “When this bill passed last month, my eyes started to well up. Our organization made a difference.”