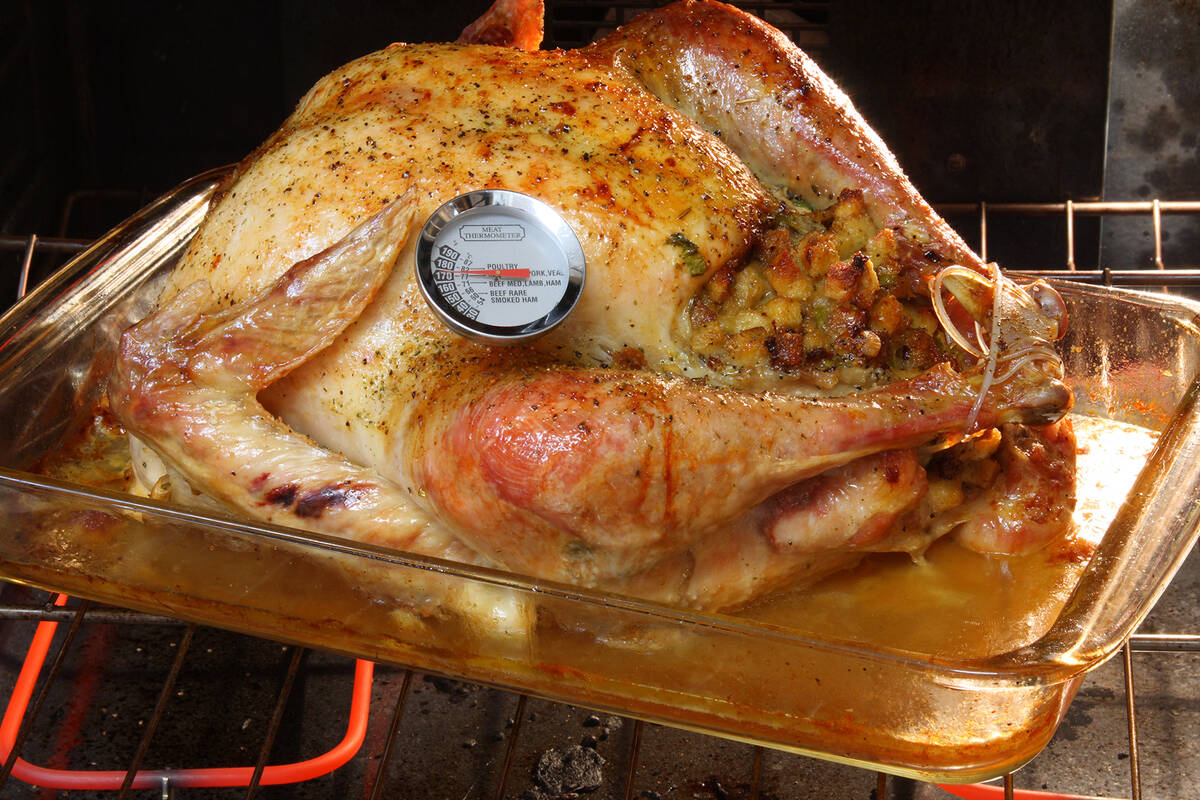 (Photo courtesy Norma Vally) Figuring out the proper method to cook a Thanksgiving turkey can be a challenge. One thing, however, is essential: a meat thermometer to check its temperature for proper doneness.

Ever wonder why a country and bird share the same name. According to Merriam-Webster.com, the name “turkey” came to us by way of Mexico, then to England and back to the New World. “When the Spanish arrived in Mexico in the 16th century they encountered the already-domesticated common turkey … By 1541, the birds had arrived in England. (The English) gave the Turks credit for any number of new imports: maize was Turkish wheat, and pumpkins were Turkish cucumbers — though both were actually New World plants … So the new bird was soon being called a turkey-cock, a name eventually shortened to turkey.”

Having solved the mystery meat name, let’s move on to how to cook one, which in some households may still remain a mystery.

Opposing cooking methods are too many to count, save one important detail — a safe internal temperature — but even that number varies. The United States Department of Agriculture says an internal temp of at least 165 F. Butterball.com breaks it down: 180 F in the thigh, 170 F in the breast and 165 F in the stuffing. I guess the only common denominator is needing a meat thermometer.

To baste or not to baste? High temperature or slow, low roasting? Brine it? Bag it? Deciphering which cooking method is best can make you want to toss the Tom and order in.

In an effort to ease the confusion, here are three trusted methods.

■ Check for doneness at the thickest part of thigh, minimum of 165 F.

■ Let it rest for at least 15 minutes before carving.

The salt of a wet (or dry) brine causes the flesh strands to break down and tenderizes the meat.

■ Submerge a whole cleaned thawed turkey (giblets removed), cover and let soak for maximum of 24 hours. (If there’s no room in your fridge, place the container in a large cooler with ice.)

■ Remove the bird, pat dry and let stand for an hour before cooking. Follow your preferred cooking method, but be mindful that no additional salt will be needed.

Reynolds Kitchens Oven Bags work like magic. I don’t know how a sealed bag can procure a crisp golden brown and tender turkey, but it does, all without basting the bird or the bag burning. Find recipes on the box or reynoldsbrands.com.

A tech note about meat thermometers: I recently discovered the MEATER. It’s a wireless smart meat thermometer that includes a MEATER app, with a probe that sends updates to your phone while the meat is cooking.