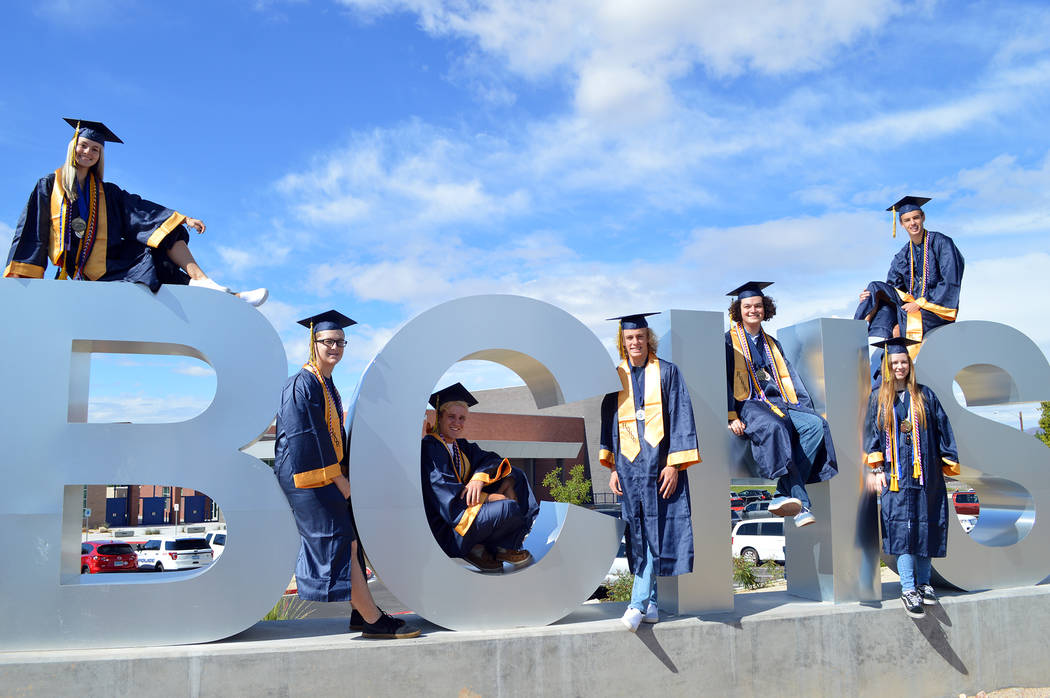 With their high school graduation tonight, the valedictorians and salutatorian of Boulder City High School’s class of 2019 have some advice for the underclassmen on succeeding in school and life.

“Stress less about everything,” said Taylor Cunningham, valedictorian. “It makes everything harder for you.”

Cunningham is one of six valedictorians. She said she plans to attend Pepperdine University in Malibu, California, and go into pre-med.

“Don’t stress out too much over things and learn how to have fun,” added Brynlee Campbell, valedictorian, who plans to attend Utah State University in Logan and major in accounting.

Karson Bailey, valedictorian, is going on a two-year mission to Buenos Aires, Argentina, with The Church of Jesus Christ of Latter-day Saints. He encouraged the underclassmen to stay the course.

“Keep on going,” he said. “Sometimes it’s rough going, but it’s worth it. Your life will be better if you graduate from high school.”

Fellow valedictorian James Ewell also encouraged the underclassmen to go with the flow and learn how to pick themselves up after they fall, so they won’t miss a beat. Like Bailey, he is going on a two-year mission with The Church of Jesus Christ of Latter-day Saints but has yet to receive his call.

Leaf Kaboli, valedictorian, encouraged the underclassmen to keep pushing through their circumstances because it will allow them to achieve their goals.

Kaboli is planning to attend the University of Nevada, Reno and study mechanical engineering and possibly political science.

Valedictorian Christian Long encouraged his younger classmates to always strive to be better.

“If their dreams don’t scare them, they’re probably not big enough,” he said.

Long said he plans to attend the U.S. Coast Guard Academy in New London, Connecticut, and then go to flight school.

Lone salutatorian Chandler Larson said he wants underclassmen to remember to always be themselves and live how they want rather than having a life of regret.

Larson will also be going on a two-year mission after which he plans to attend Southern Utah University in Cedar City and major in biology with a pre-med emphasis. He has yet to receive his call for the location of his mission.