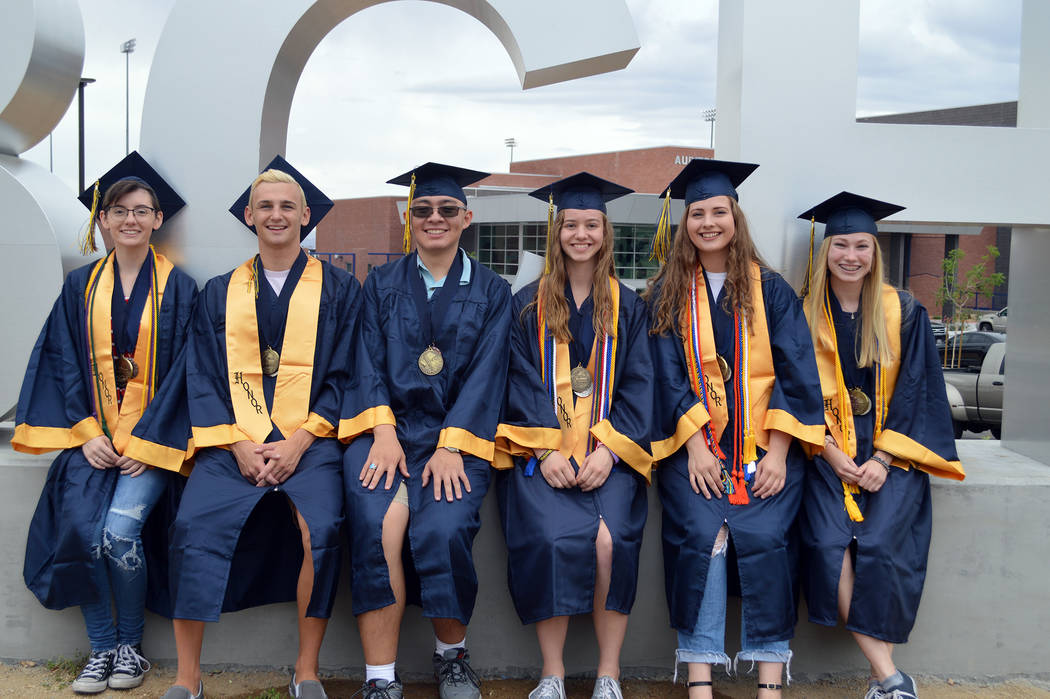 Having already achieved academic success, the valedictorians and salutatorian of Boulder City High School’s class of 2018 have their sights set on succeeding outside of Boulder City.

“I am very proud. … They have worked hard to get to this place in their journey, and I know that they will do amazing things in the years to come,” said Amy Wagner, principal of the high school.

This year’s class includes five valedictorians and one salutatorian. They are going into a variety of fields, and each is excited about different parts of life after high school.

“I’m looking forward to living on my own,” said valedictorian Camille Torgesen. “I’m also excited to try new classes … ones I want to take.”

“I’ve never lived in snow, so I’m excited about that,” she said.

Valedictorian Erica Snow will attend Utah State University and plans to major in civil engineering. She said that she is excited to set her own schedule and further develop her passions.

“I’m definitely excited for the freedom to set my schedule and do things I want to,” she said.

“I’m most excited for the diversity in a bigger school and community,” said Kirsten Lowe, valedictorian, who plans to attend the University of Nevada, Las Vegas and major in journalism.

Fellow valedictorian Kristina Davidson is looking forward to being in different part of the state when she attends University of Nevada, Reno.

“I’m excited to go somewhere new,” she said. “I’ve grown up here. I love the community here, but I’d like to be somewhere else and meet new people.”

Salutatorian Sean Garner said that after high school, he wants to go into cybersecurity and is looking forward to military service.

Valedictorian Clayton Pendleton said he is looking forward to the independence he will have as well as being able to study what he wants to.

Prior to attending Southern Utah University in Cedar City for college, Pendleton will go on a Mormon mission to Natal, Brazil.

Despite their excitement in moving on, the students said they will also miss Boulder City High and their experiences there.

Garner has been in six school productions, including playing Shrek in the school’s recent production of “Shrek: The Musical.”

“I’m going to miss playing sports, my friends and the community,” said Pendleton, who was a three-sport athlete.

He’s also the captain of the swim team that has won three state championships in four years.

“We’ve enjoyed a lot of success,” he said.

Lowe said she will “definitely miss playing flag football” even though she wasn’t able to play all four years because she came to the high school as a sophomore.

“It was a great experience for managing and building social skills,” she said.

In addition to sports, the students said they will miss their friendships and clubs.

“I’ll miss band and the friends I probably won’t see after school,” said Torgesen, who played the flute and became the drum major this past school year.

“I’m going to miss the teachers who helped and the friends who supported me through high school,” Snow said.

Davidson said she would also miss the community and knowing someone at almost every place she went.

The valedictorians have a weighted GPA of 4.8 and the salutatorian has a 4.78 GPA. The final ranking is based on all completed high school credit-granting courses completed by the end of eight semesters, including those courses that receive bonus points.