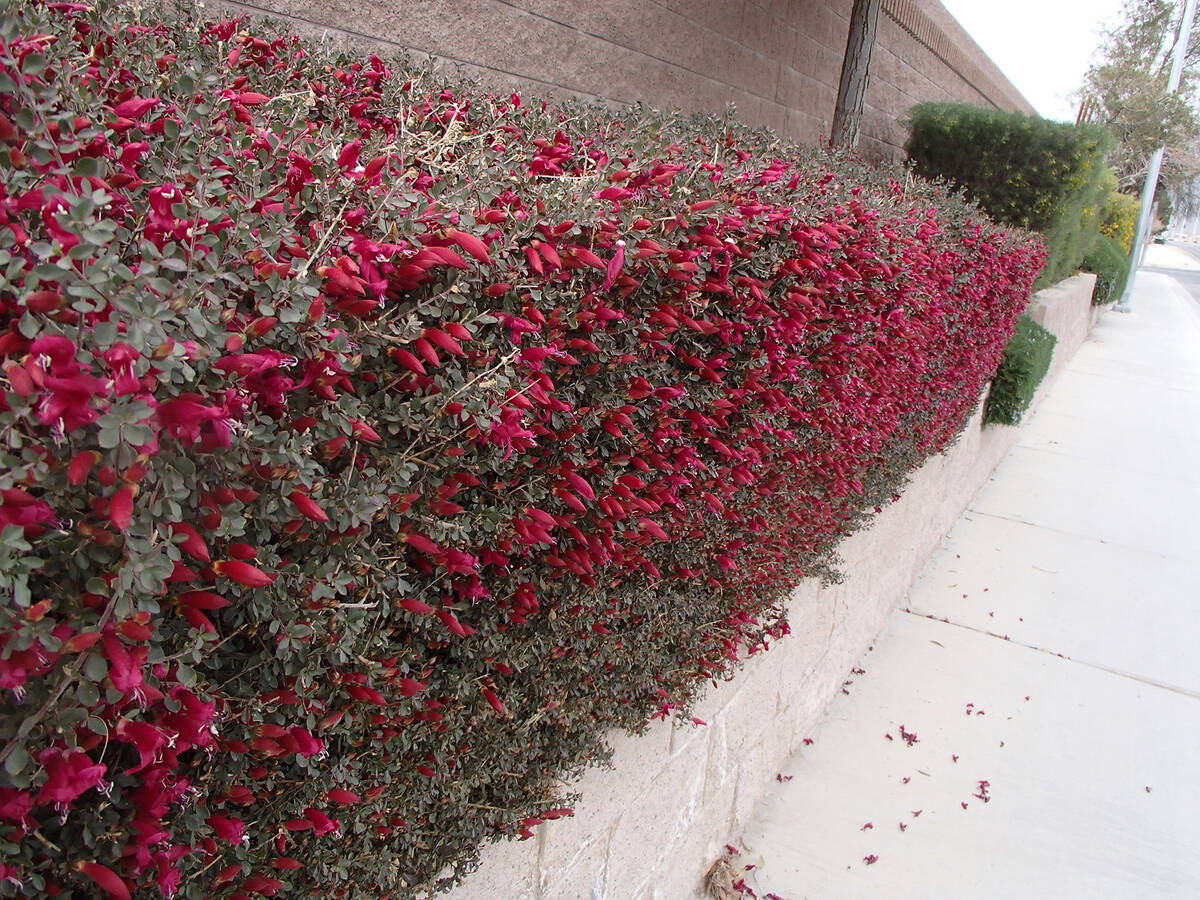 (Bob Morris) These red emu bushes have been planted to create a hedge. The best time to prune it with a hedge shears is in late May or early June or in November after it flowers. It will flower in the early spring and fall months. Remember, prune plants noted for their flowers immediately after they finish flowering. 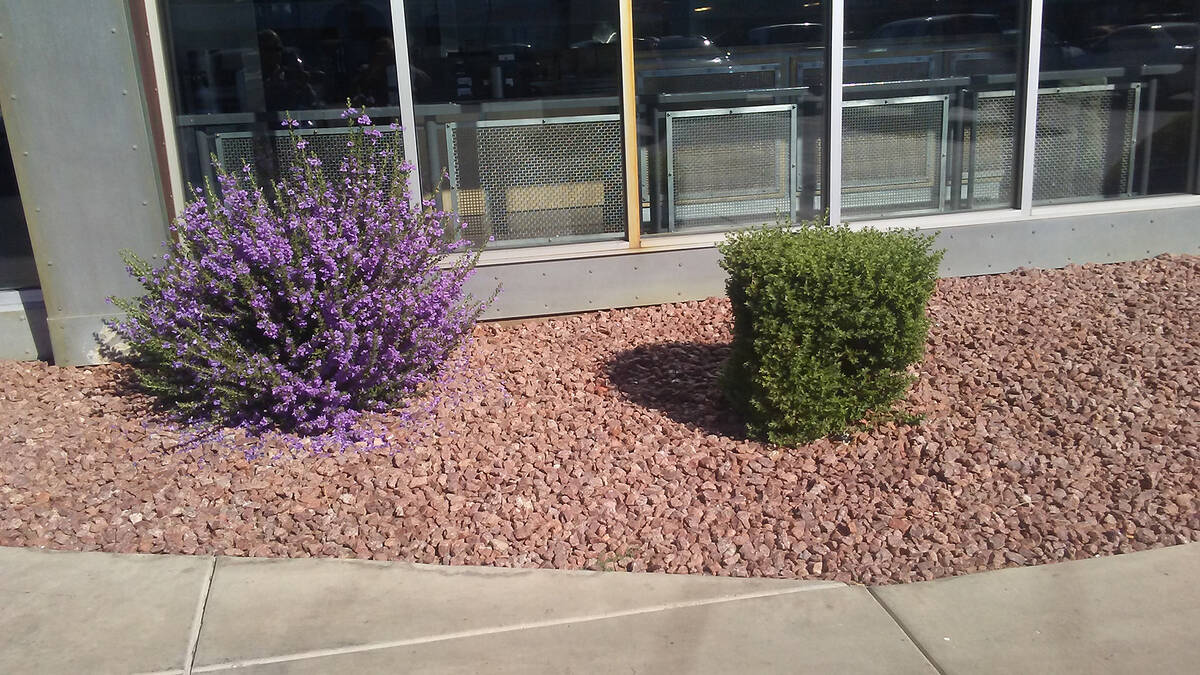 (Bob Morris) Texas ranger should be sheared into a gumball shape and allowed to grow and produce flowers. 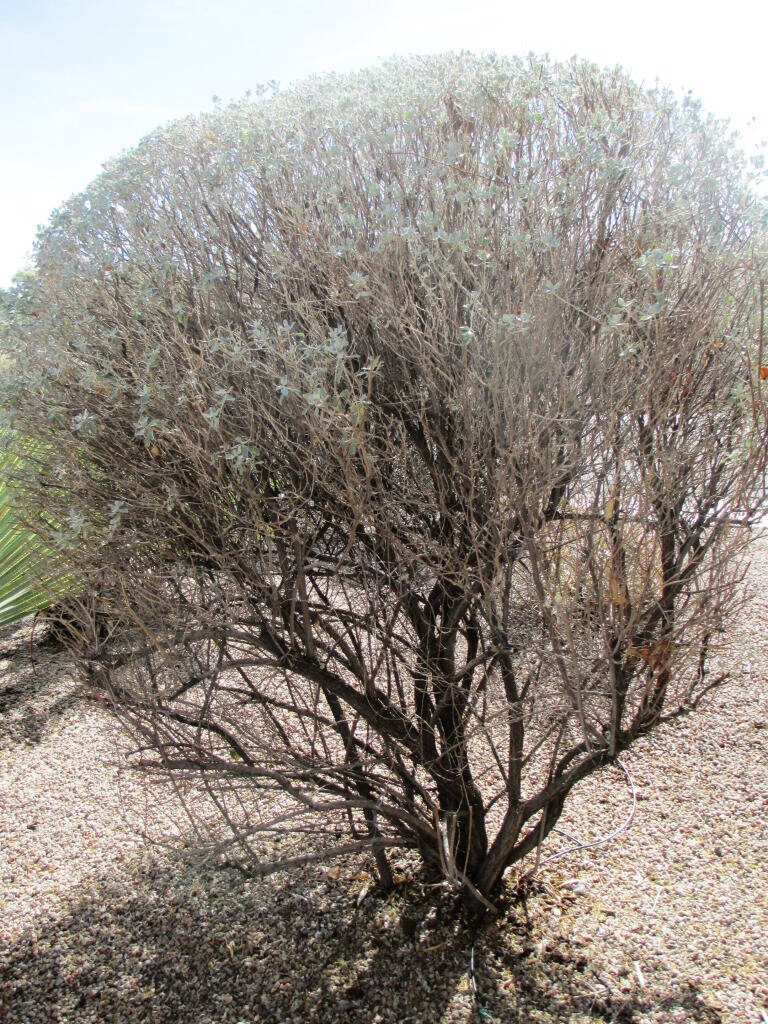 (Bob Morris) This Texas ranger has been continuously sheared every year for 10 years. The best way to correct this poor pruning practice is to replace the plant. 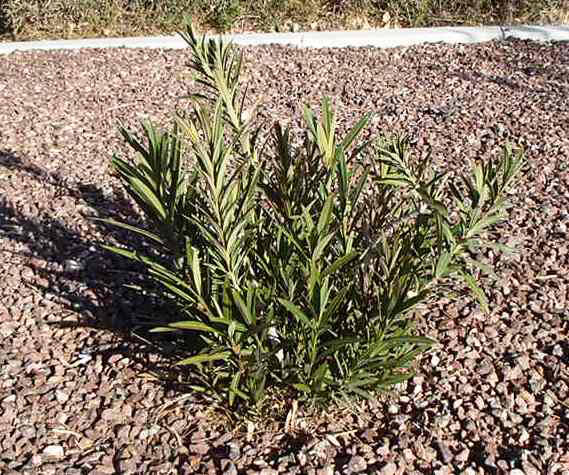 (Bob Morris) Oleander suckers from the base of the plant signals that it will respond to rejuvenation pruning and grow back quickly. 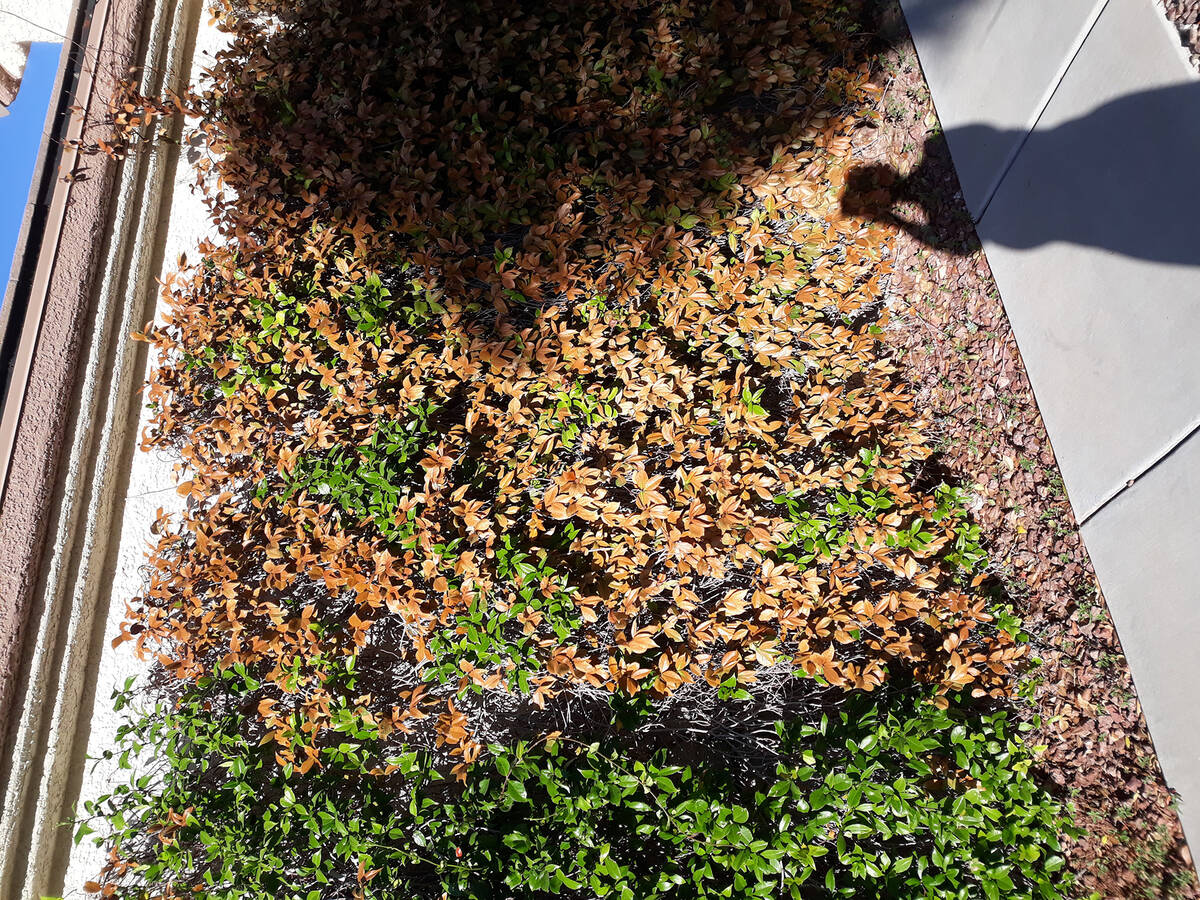 (Bob Morris) Jasmine (star) vine require “organics” like compost added to the soil. Hot landscape locations like the west and south sides of a home should be avoided.

Sharpen, adjust and sanitize at the beginning of your pruning day. Make sure the blades are clean. If you encounter a plant that looks suspiciously like it’s diseased, then sanitize the blades of your equipment when you’re finished with that plant. There should be no “free play” when you twist the handles of your pruning equipment back and forth. If there is, it needs tightening. It should be tight enough so that there is no free play between the blades but not so tight that it’s tiring when you’re pruning.

Shrubs that continuously flower throughout the season, like oleanders and Texas sage (aka Texas Ranger), are correctly pruned any time during the winter. Pruning during the winter, rather than hedge shearing the plants into “gumballs” during the spring, summer or fall, minimizes the down time they aren’t flowering. The only time shearing a plant is appropriate is when the plants are all grown next to each other in a solid row called a hedge. In this case, hedge shearing the plants causes them to thicken into a solid wall.

Many shrubs that sucker from the base, such as oleander, can be pruned to a few inches of the ground this time of year. They will start flowering in a year and spring back to full size again in about three years. This type of pruning is correctly called rejuvenation pruning (sometimes incorrectly called “renewal pruning”). Pruning these types of plants close to the ground cause them to be full and bushy several years in the future. Rejuvenation pruning can be done again in about six to eight years. “Renewal pruning” is totally different.

Q. I have several jasmine vines. What should I use for fertilizer and when should they be fertilized?

A. Fertilize once a year in February or March with a fertilizer for roses or other flowering plants. Follow the rate suggested on the bag. If the plant is growing vigorously, reduce the amount of fertilizer by half; otherwise use the full amount. Put the fertilizer where water is delivered to the plant.

I’m assuming you mean the star jasmine you are growing as a vine or ground cover. This plant is originally from Japan, so it is not a desert (xeric) plant but a mesic plant. This means it performs best in soils higher in organic content so you should avoid surrounding it in rock. It will grow better surrounded by wood chips as a mulch. It also grows best on the east or north side of a home rather than the south or west side in full sun. South and west sides of a home are normally hotter and drier.

If you can’t grow it in wood chips, then pull the rock mulch back about 3 feet from the base of the vine and add about a half inch of compost to the top of the soil. Either mix an iron fertilizer with this compost or apply it separately. Keep this compost away from the base of the plant if you want the plant to live. Water this compost into the soil and re-cover the soil with rock mulch. You will probably have to do this every two or three years if you are using rock surrounding the plants.

Be wary of plants that originate from the wet climates like Japan or any southeast Asian country . Yes, this includes Japanese blueberry, which is a very popular plant right now.

Q. When should I prune and fertilize my roses?

A. Roses are fertilized and pruned around the same time every year: late January or early February at the latest. You can apply a fertilizer again about two months later and another application in the fall when temperatures begin cooling.

The total amount of fertilizer applied is divided by the number of applications. So, if there is a single application, then the full amount is applied once in late January or early February.

If you are applying it three times a year than one third of the fertilizer is applied in January or early February, one third is applied again in about April and a third again when temperatures begin cooling in October.

Don’t forget to apply a favorite rose iron fertilizer application with your first soil application each year. Make sure it’s watered in and covered. Many roses begin yellowing in our alkaline desert soils if iron is not used in the spring.

I have seen lots of new roses planted in rock. No, no, no. Plant roses on the north or east sides of a home, amend the soil with compost and cover this soil with wood chips. These are mesic plants.

Q. I have Carolina cherry laurel and they need fertilizer this year. How often should they be fertilized and when?

A. Because Carolina cherry laurel is a native plant found in the southeastern United States, it’s fertilized lightly each year in the early spring. This fertilizer application improves its density, flowering and leaf color. The preferred fertilizer is an evenly balanced fertilizer such as 16-16-16.

Because this plant is native to the southeastern United States that may make it tolerant of the heat but not of the soil. It will grow best on the east and north side of a home, surrounded by wood chips and planted in amended soil. It is a mesic plant. You are not in Kansas anymore, Toto.

Q. I have been growing tomatoes, peppers and eggplant in my raised beds. I had good luck with sweet potatoes this past year. The rats were problems for everything but the sweet potatoes.

A. Rats are omnivores; they will eat anything that they like including your vegetables and fruit when ripe or ready for harvest. The best way to inhibit rats is to exclude them from your garden area is by surrounding your growing area with wire cloth. Poisons can be used but remember that these dead, decomposing animals are full of poison. Protect predators that might eat them.

Make sure composting areas are sealed in a container or bin. Clean up any food left out for pets or birds. Remove any piles of debris or scraps so that rats can use them as hiding or nesting places. Use a professional exterminator if needed and get them involved.

Vegetables need a soil that is improved with a compost or soil amendment every spring. Before planting this warm season crop of vegetables such as tomatoes, peppers and eggplant, amend the soil with a half inch of compost applied to the surface and double dig it into the soil.

If the raised beds are balanced with a compost at the very beginning, then nothing more is usually needed for fertilizer applications other than nitrogen. Supplement vegetables once a month with your favorite source of nitrogen fertilizer whether that’s ammonium sulfate (21-0-0), blood meal or fish emulsion.