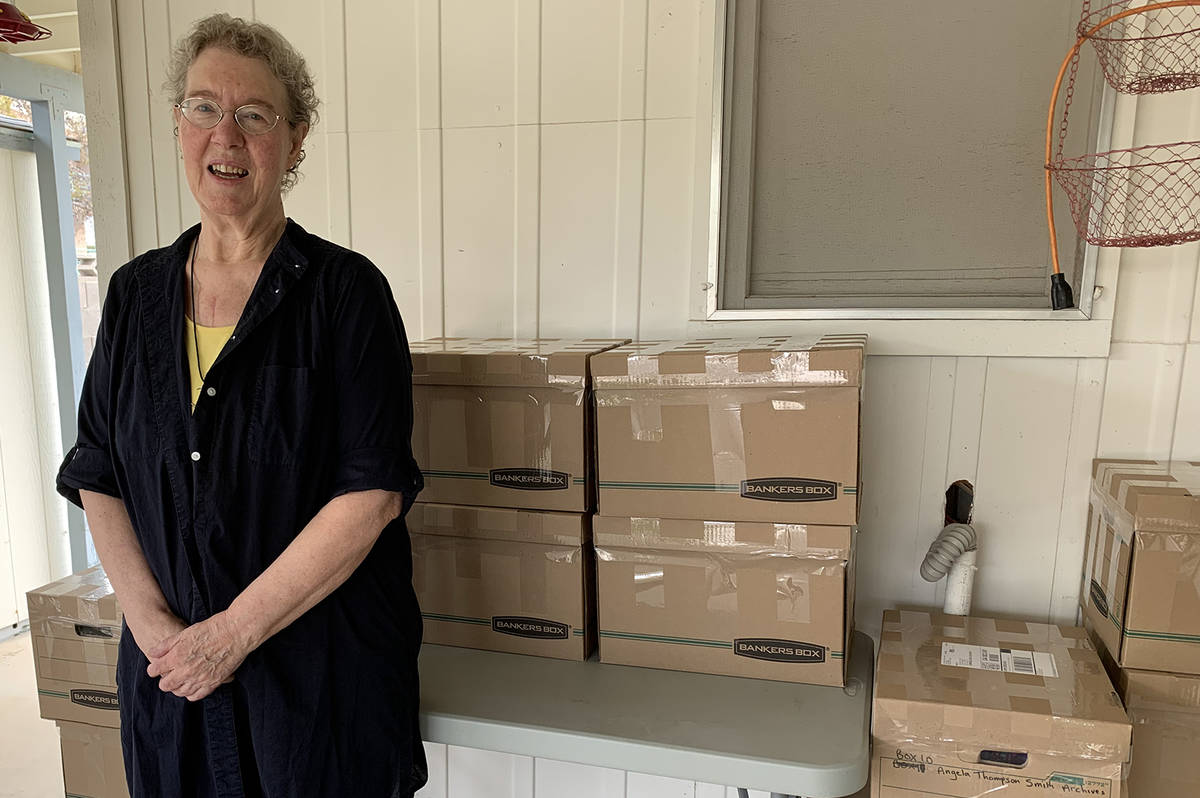 (Hali Bernstein Saylor/Boulder City Review) Angela Thompson Smith of Boulder City stands with some of the 15 boxes filled with papers, studies and other memorabilia from her 30-year career in psychology, research, education and writing that are being donated to the University of West Georgia’s Ingram Library’s special collections.

Boxing up 30 years worth of research papers and written articles brought a smile to the face of Angela Thompson Smith.

But it was more than just the physical act of compiling the collection from her life’s work that brought her joy. The Boulder City resident arranged to have her work donated to the University of West Georgia so it can be used by students and others doing research.

“I feel very, very honored to have all my papers there,” Thompson Smith said.

She said she is glad that her work “won’t be lost and will be useful to students for many years to come.”

Thompson Smith is a renowned expert in remote viewing, which is defined as seeing or sensing with the mind distant or unseen items. She is a founding board member and director of the International Remote Viewing Association.

“We were thrilled that Dr. Thompson Smith reached out to us,” said Blynne Olivieri, head of special collections at the Ingram Library and associate professor at the University of West Georgia in Carrollton.

She said the library’s special collections are filled with rare books, rare materials, personal papers and archival materials, particularly those that relate to humanistic psychology and human consciousness.

“These archival collections, like the papers of Angela Thompson Smith, are the primary source that students and scholars use to generate their own scholarly products,” Olivieri said.

Olivieri said Thompson Smith is one of a few women who has made a career as a self-identified remote viewer, which makes her work more important.

Now organized and confined to 15 file boxes, Thompson Smith said she had a four-drawer file cabinet packed with her papers and wasn’t sure what to do with them.

“About two months ago I was looking at the file cabinet and thought I’d like to go out to the desert and have a big ceremonial bonfire,” she said.

Her friends, however, protested and suggested she donate them to the university, which already had a collection of works from Ingo Swann, who is considered the father of remote viewing.

Thompson Smith started her career in her native England as a registered nurse. She later became a social worker and medical researcher. From 1988 to 1992 she worked at the Princeton Engineering Anomalies Research Laboratory in Princeton, New Jersey.

In addition to her work, Thompson Smith has taught for the University of Nevada and authored eight books. She also wrote a column for the Boulder City Review.

While getting her work ready to ship, Thompson Smith said she has enjoyed reminiscing about past projects, students and people she worked with.

Now she has time to focus her attention on the upcoming conference for IRVA. Although she won’t be able to attend the event, which is being held Sept. 9-12 in New York, she has recorded a program that will be presented during the conference.