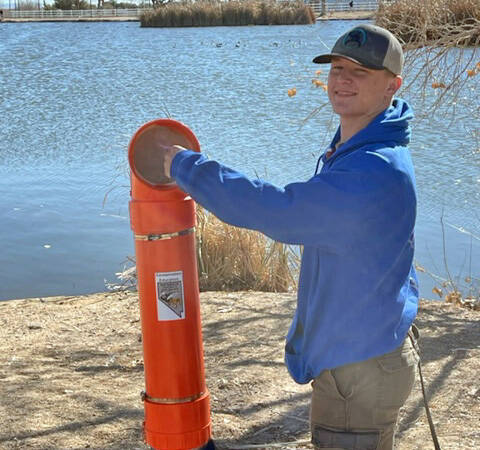 Doug Huffmaster Luke Huffmaster shows off one of the five receptacles he recently installed at the pond at Veterans' Memorial Park in Boulder City for his Eagle Scout project. They are for used fishing line and hooks. 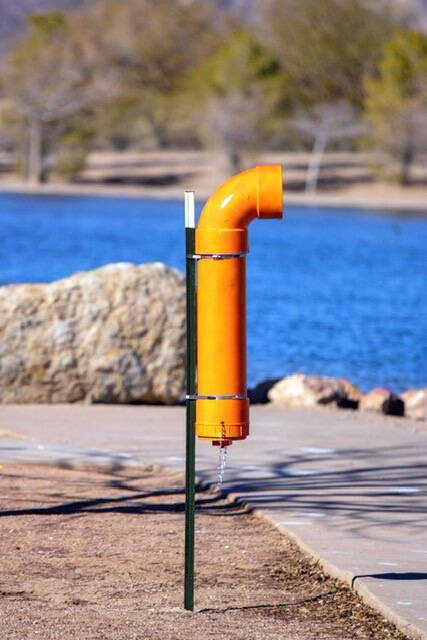 Doug Huffmaster This receptacle is one of five Luke Huffmaster installed at the pond in Veterans' Memorial Park.

A Boy Scout used his love of fishing to help protect wildlife at the Boulder City pond for years to come.

“I saw a way to give back to that area,” said Huffmaster. “It will keep the area clean and safe.”

Huffmaster said wildlife will pull the used line and hooks out of trash cans if people throw them away there.

“These receptacles will help patrons of the pond dispose of their fishing lines and hooks in a safe manner,” said Jennifer Spinkelink, recreation coordinator. “The local wildlife become tangled in the abandoned fishing lines and can often snag a hook. Luke made the receptacles accessible all around the pond.

“The city appreciates the innovation of this young man to see a need, build a solution and implement it,” she added. “Projects like this help clean, green Boulder City stay that way.”

Huffmaster, a member of Troop 256, is an avid fisherman and has fished at the Boulder City pond for a long time. He’s been in the Scouts since third grade and decided to install 10 receptacles for his Eagle Scout project; five in Boulder City and five at Floyd Lamb Park in Las Vegas.

“Those were the only ponds we could get into. … Doing it with the guys I’ve grown up with, it’s really rewarding,” he said.

His dad, Doug Huffmaster, was one of the people on hand for the installation.

“He has tied his own (fishing) lines since he was five years old. … He’s really hands on, so it was cool to watch him instruct and see if it was done correctly,” he said.

In addition to building and installing the receptacles, Luke Huffmaster said he will try to maintain them so they last for a long time.

“All I can hope is that it helps people appreciate wildlife,” he said.

Luke Huffmaster lives in Henderson and is a junior at Pinecrest Academy Cadence.