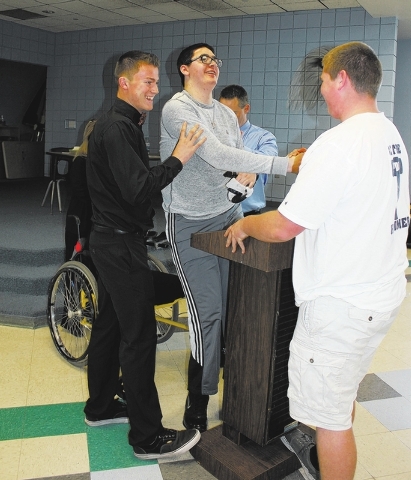 Family and friends of Giulian Grasso are holding a Stand With Giulian fundraiser Feb. 8 at Boulder City High School.

The event is being held to assist in Grasso’s recovery after he suffered a traumatic brain injury in April 2012 during a longboard-style skateboard accident.

“The Stand With Giulian fundraiser is twofold,” said Kayla Grasso, his stepmother. “It is being used as a fundraiser, but also as incentive for Giulian to take strides to standing up. It is not easy for him because during his time in the wheelchair, his muscles have gotten smaller. He needs to stand up in intervals to stretch his muscles and gain stamina.”

Grasso was homeschooled in 2013, but he is doing well enough to attend school for six periods daily. He is a senior.

The fundraiser is one of several Grasso’s family and friends will hold this year to help pay for $2.2 million in medical bills. A golf tournament is scheduled for April.

The students at Boulder City High School held their own Stand With Giulian fundraiser Monday during both lunch periods as part of Spirit Week.

“This event was another great example of not only the perseverance of a young man to overcome a great obstacle, but also to the love and support that is shown to him repeatedly at Boulder City High School and in the community,” Principal Kent Roberts said.

After crashing on his longboard in Boulder City, Grasso spent more than a month in a coma at University Medical Center in Las Vegas.

The formerly athletic teen still cannot walk, but has gained weight and is doing better, according to his family.

On Monday, with the assistance of two football players to help with his balance, Grasso was able to stand and remain standing for 1 minute, 45 seconds during the first lunch period. During the second period, he reached two minutes. But it was enough to bring a smile to his face and those of his peers.

“Seeing him stand by himself was very inspirational. Especially since I knew him before the accident and then to see him now and stand side by side with him while he used his strength to stand was very heartwarming and inspiring,” said Brooks Roe, one of the football players who assisted Grasso.

Grasso told family members Monday night that he “had a great time and everyone was supportive.”

Kayla Grasso said afterward, “I could see in his face and hear in his voice that it meant a lot to do this at the school with his peers.”

He only had the two opportunities to stand Monday, but his goal for the Feb. 8 fundraiser is to stand enough times to reach a total of 30 minutes. People can pledge money toward each minute that he is able to stand.

The Feb. 8 event will be from 2 to 3 p.m. at the school’s gym. Each time he stands, so will everyone in attendance.

“I think it’s great that the whole school comes together to support Giulian. It helps us to come together as a whole and displays the sense of community we all have,” student council member Tristyn Clark said.

Another student, Canyon Deml, summed it up: “It was wonderful to see all the students stand together as one to support Giulian.”