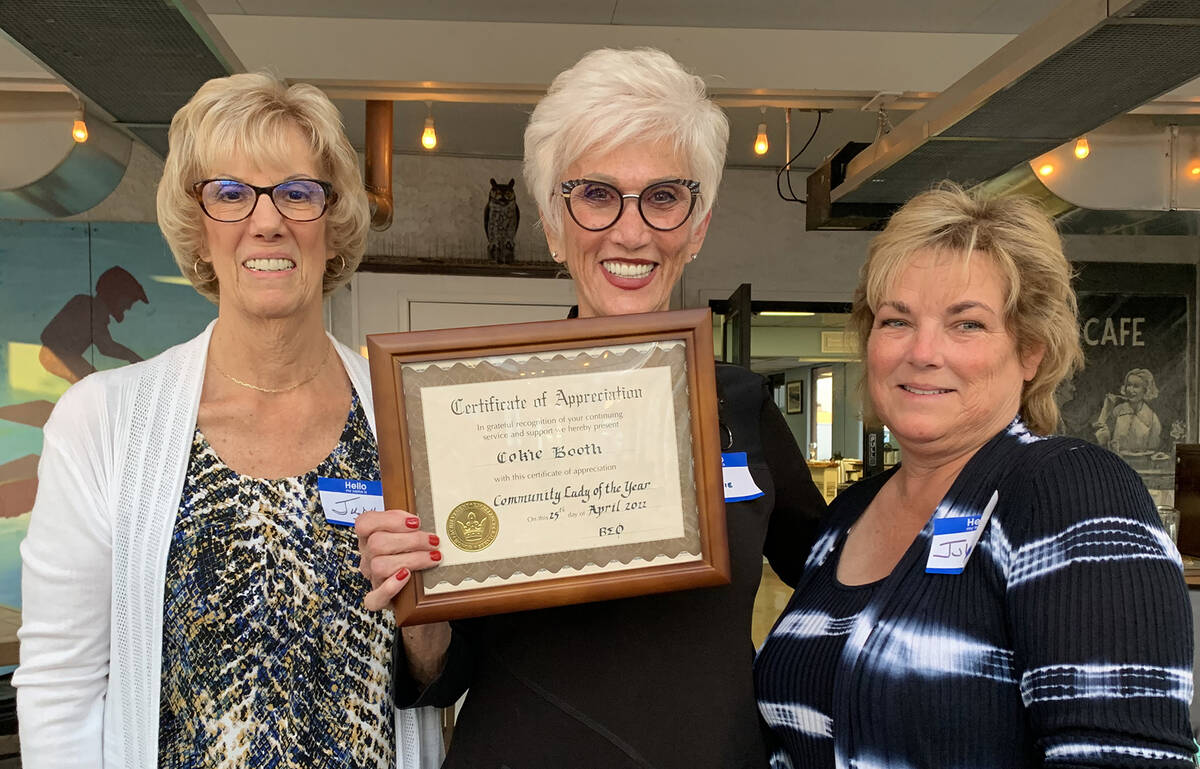 The sorority had originally planned to honor Booth two years ago, but the award was delayed due to the pandemic.

Judy Vogel, who presented her with a certificate of achievement, highlighted Booth’s work in the community, which includes serving on the city’s Planning Commission and Nevada State Board of Cosmetology, raising funds for the Boulder City Boys and Girls Club, hosting Bark in the Park at the annual Spring Jamboree, and being president of the Boulder City Community Club.

Booth, who owns BC Real Estate, was recognized for her work as a Realtor and broker as well as serving on the Professional Standards Board for the Greater Las Vegas Association of Realtors.

Boyster, who was called sassy for her tenacity in getting the job done, was recognized for her devotion to the group and service after having accepted a second term as president of its city council, which oversees all chapter activities.

Updates on recent chapter activities were provided by Marisue Barnes from the Laureate chapter, Mary Skinner from the Preceptor chapter and Jenny Ward from the Xi Zeta chapter.

Barnes said that despite limitations on the group’s ability to meet as often due to COVID-19, they continued to provide support for residents of the long-term care center at Boulder City Hospital, as well as for disabled veterans at Walter Reed National Military Medical Center in Maryland.

Skinner spoke about Preceptor’s gift of paper products for the residents of Quail Ridge Manor in Boulder City and packing gift-filled shoe boxes for Operation Christmas Child. She said they also gathered old greeting cards for St. Jude’s Ranch for Children and eyeglasses for recycling programs.

She then announced that members agreed to dissolve their chapter, effective Monday, due to its small size and hardships in holding regular meetings.

Ward highlighted Xi Zeta’s promotions and ritual ceremonies, growing membership, social activities as well as its support for Spread the Word Nevada. She said the group’s goal was to collect 90 books to donate to the nonprofit and they had already collected more than 390.

She said they also participated in Wreaths Across America in December at the Southern Nevada Veterans Memorial Cemetery, purchasing several wreaths and placing them upon the graves. In addition they purchased gift cards for patrons of the Senior Center of Boulder City.

The sorority announced it would be awarding two scholarships to graduating seniors from Boulder City High School this year.

To mark the organization’s 90th anniversary, the group donated $90 to the Senior Center of Boulder City in lieu of having favors at the table.