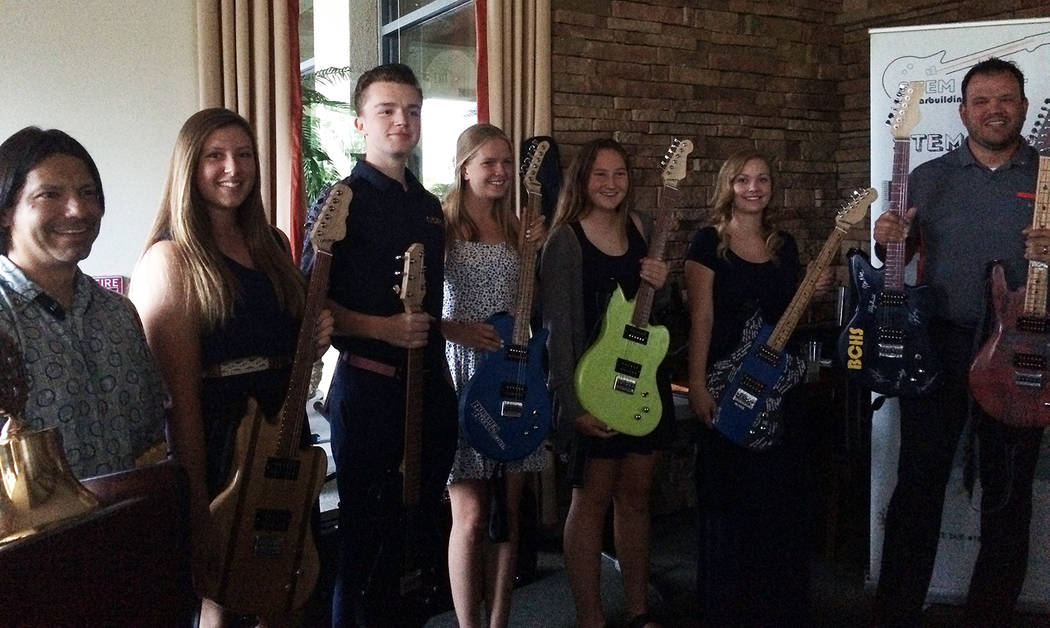 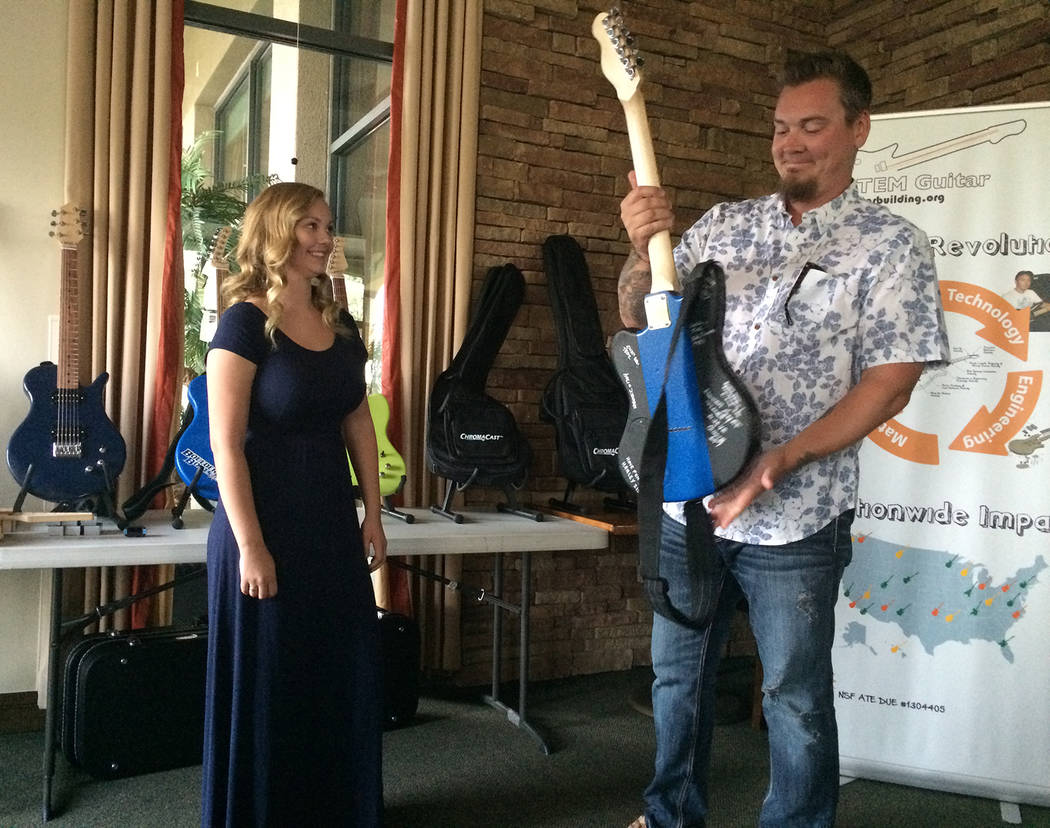 Hali Bernstein Saylor/Boulder City Review Boulder City High School student Cynthia Sage presents her father, Michael Sage, a retired Henderson police officer, with a guitar she made and had signed by his co-workers, during a presentation on May 31 to thank the Rotary Club of Boulder City for helping sponsor the STEM guitar project at the school.

There is a small group of students at Boulder City High School that is dedicated to the art of the guitar.

Even though they might have never played a single chord, they know everything about the instrument, how it works and what it takes to make beautiful music.

The students have spent the past semester learning about guitars while making their own as part of a pilot, first-time class that teaches STEM — science, technology, engineering and math — skills.

All five students in Joshua Fisher’s beginning marketing class took on the challenge, building the guitars and then creating marketing plans for the instruments.

“It’s weird to think I made this,” said Erin Cowley as she displayed her lime green guitar for members of the Rotary Club of Boulder City, which helped sponsor the program.

As she told about her experience, Cowley also spoke of several challenges, including one that resulted in a pencil being inserted into a hole and permanently ensconced but hidden inside the instrument.

“I can’t wait to learn how to play it,” said Abby Giunta, who created a guitar out of walnut and maple.

Mike Aikens, a retired engineering technology teacher from Butler Community College in Pennsylvania, brought the program with him when he moved to Boulder City last year.

The original idea behind the guitar building was to excite educators about teaching STEM principles using the instrument. He and several colleagues obtained a $1 million, four-year National Science Foundation grant to conduct a five-day faculty development workshop for educators about how to use an electric guitar to teach math and science.

From there, the program expanded into actually building the guitars with 12 activities all mapped to common core or next gen math standards, he said. The group also obtained a second $1 million grant.

Today, the STEM Guitar Project is offered in all but a few states.

Aikens said it can be adapted for other groups as it encourages conversation and stimulates thinking.

“When you make stuff, the conversation is easy. There’s a good exchange and fun energy. That’s exactly what happened at the high school.”

The auto teacher carved out a small area in the shop for the students to work on their guitars.

Locally, the costs for the pilot program were underwritten by the Rotary Club of Boulder City and Hope Church. Each guitar kit costs $180.

“That two nonprofits collaborated to make this happen is a testimony to the town and the spirit of the project,” Aikens said. “Once you build the guitars, everyone gets excited.”

In addition to the five guitars made by the students, the class collaborated on one for the school, which will be displayed in the administration building. Fisher also made a guitar, as did Larry Archuleta, president of the Rotary Club.

The guitar class was so well-received and generated enough interest that next year it is expected to be offered as an after-school club, similar to the High Scalers robotics team, Fisher said.