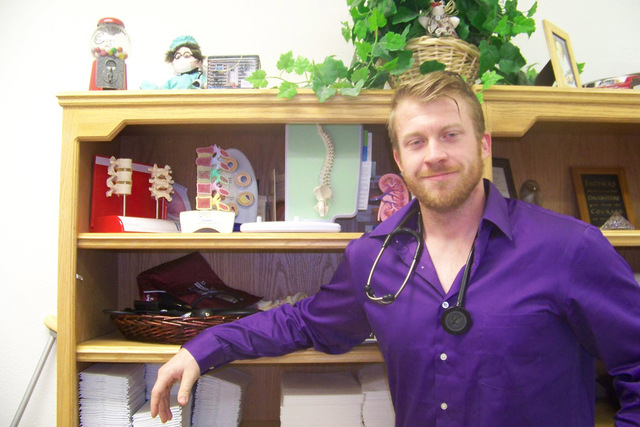 Today, that’s not the case for Youngs, a Boulder City native and University of Nevada School of Medicine student. Completing his last year of medical school, Youngs just spent four weeks in a required course called Advanced Clinical Experience in Rural Health Care, or “rural rotation” for short. This program has been in existence at the Family Doctors of Boulder City since 1980 because, in large part, of Dr. Warren Smith of Family Doctors, one of the program’s pioneers.

Today, 34 years later, Youngs continues to keep a medical tradition alive with his work in Boulder City. He shadowed Dr. Herve Bezard, a 25-year teacher/mentor in the rural rotation program.

The path Youngs took to get to where he is today was not straight and narrow. He always knew he loved science but didn’t know where that was going to take him. He said he felt there was something, somewhere in the world he had to experience and described science as the “train” he rode in his journey to find that amazing something.

Because he had no plan in mind, Youngs said he decided to follow in his father’s footsteps and become an engineer. After graduating from Boulder City High School, he attended the University of Washington in Seattle for two years. He realized engineering was not for him and transferred to the University of Nevada, Reno, where he received a Bachelor of Science degree in biology in 2009.

After graduating, Youngs applied to medical school but was not accepted. Yet he knew now that he wanted to combine his love of science with being able to help people, one at a time. He worked as a scribe in a hospital emergency room, writing charts for the doctors, and was “hooked” on emergency medicine.

Youngs said he was not going to let one refusal into medical school deter him. In August 2009, he was accepted at the University of Nevada Medical School. His feeling was, “If you have the heart and really want to do it, you can do it.”

Youngs said he enjoyed his training in Boulder City and learning from Bezard during the rural rotation. Bezard said the experience also provides a learning experience for him.

“(The rural rotation) has been a big part of my education over the years. I learn a lot more. Having them (the medical students) around energizes me. It breaks up the monotony. They’re all really intelligent, exceptional people. It reminds you of why you’re doing this. … It’s definitely a two-way thing. It’s not just me teaching them, it’s me learning from teaching them.”

There is more to Youngs than becoming a doctor and practicing emergency medicine. When he wants to have fun, he said he enjoys skydiving, since it feeds the “adrenaline junkie” in him.

Now that his rural rotation in Boulder City is complete, Youngs is working at the University Medical Center in Las Vegas on his gastroenterology rotation, another requirement of his program.

When this rotation is complete, Youngs will travel to Nicaragua in January where he will spend four months. He will be learning Spanish and stay with a Nicaraguan family. His days will be spent studying Spanish in the morning and treating patients in the afternoon at a local clinic.

Youngs will receive his doctorate in medicine in May and then it will be on to residency. He has applied to hospitals in California, Texas and Louisiana. He also has applied to UMC.

The final step in the residency application involves Youngs preparing a list of the hospitals where he has applied and interviewed, and the hospitals do the same. Then a computer program will match the student’s list with the hospital’s list. The result will be the next step in Youngs’ journey into emergency medicine, complete with a stop in his hometown.