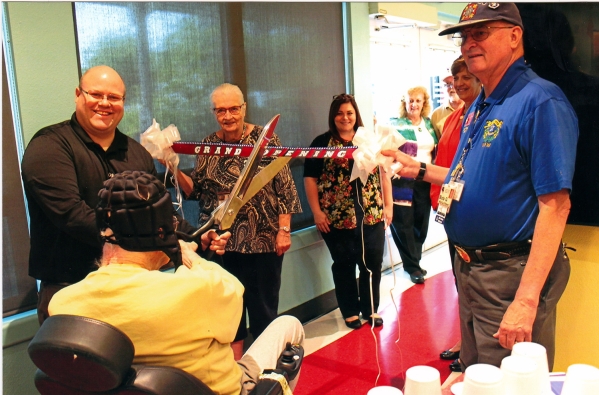 Older GIs might remember a day when they we serving in the military that they needed refreshments, or perhaps just wanted a place to relax and socialize with their buddies. The best place to accomplish that was the canteen.

At the Nevada State Veterans Home in Boulder City residents had a space that served as a canteen, but the room was beginning to show its age. About two years ago the administration began making plans to upgrade the area. The current administrator, Mark McBride, inherited the project, and he and his team set out to bring it to fruition.

The newly remodeled canteen was unveiled and opened to home residents recently.

“The area was a canteen, but it had no theme,” McBride said. “We decided to remodel it with a 1950s sports theme.”

The walls feature photographs of familiar faces from the 1950s representing several major sports. In addition, there are pictures of Elvis Presley and Marlon Brando and some motion picture art, all presented on a backdrop of walls with extravagant color. McBride said that the colors represent a transitional era from late ’50s to early ’60s, and are a nod to psychedelic art and unfettered creativity that flourished during that period.

Tables in the new canteen were designed to operate similar to Murphy beds. They are hinged on one side and can be retracted into the wall when not in use, leaving an open area for gatherings.

“The room also has large-screen plasma televisions. We made it a social area for our residents to enjoy,” McBride said.

McBride and his associates took the project from design to completion. He said the decor incorporates sports and movie memorabilia as a way to connect with residents.

“We have a lot of sports fans here, and we wanted to connect with them. As for entertainment, we’re near Las Vegas,” he said.

“There were some great comments about the canteen. Residents liked how bright and open it is, and that it’s a fun environment,” said Kat Miller, director of the Nevada Department of Veterans Services.

Individuals who helped with the ribbon cutting ceremony included resident and World War II Navy veteran Karl Ogg Sr. and Bob Garlow, chairman of the Nevada Veterans Assistance League and a veteran. The plan is to keep the area open 24 hours a day.

Miller explained that the home is state owned and operated, and receives support from the Department of Veterans Affairs. The 84,000 square foot structure provides around-the-clock nursing for eligible veterans, and is recognized for its modern amenities and full continuum of care. Miller added, “The facility is dedicated to providing the highest quality of nursing care, with an emphasis on maintaining resident dignity in a home-like environment,” she said.