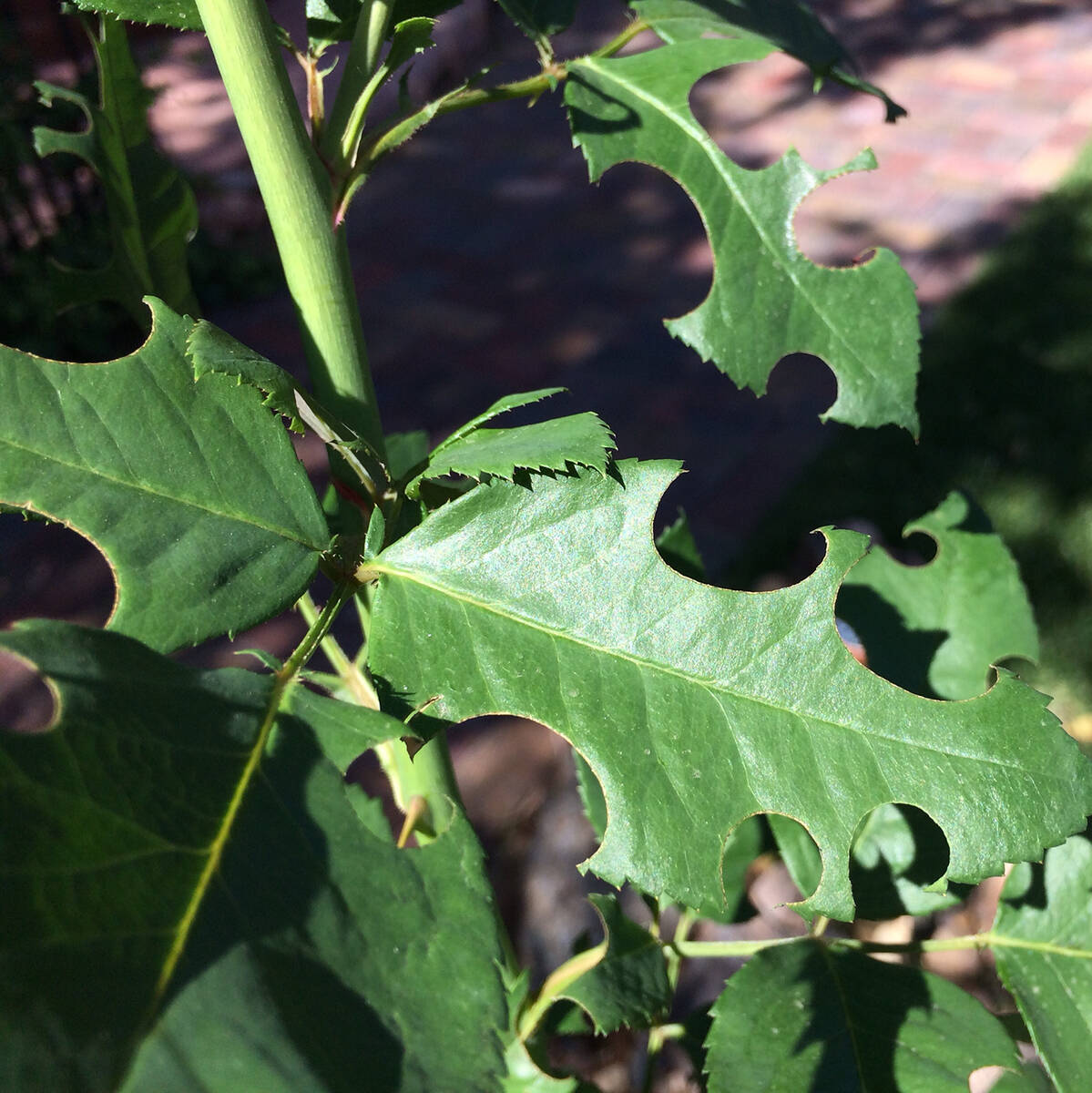 (Norma Vally) Large holes in your leaves are likely caused by leafcutter bees. They are essential pollinators and should not be killed but can be kept away from plants with netting.

Being away for a couple of weeks and knowing how quickly things grow in June, I was excited to come home and check on my garden. As I peeked out at my precious petunias, to my horror, I found pests had used my garden as a buffet station. Leaves ravaged, buds denuded, stems holding on to their shoots for dear life. I was sick, which quickly turned to rage.

While I’m not a proponent of chemical pesticides, when I saw the devastation they caused all I could think was “Bring me the DDT.” To hell with eco-friendly, I’m going nuclear on these little SOBs.

Cursing death to the insect-fidels, I began riffling through the shed for the makings of a mother-of-all-bug-bombs. Thankfully, my husband pulled the pressure sprayer out of my hands and talked me down.

Vermin vengeance quelled, I knew I could find nontoxic and civilized ways to handle bug busts, but it would take some investigating. First, I began to identify the various garden felons based on evidence left behind: shiny sticky residue (aphids), large leaf holes (leafcutter bees), and so on. After much research, here’s a list of homemade and “green” insecticides and deterrents to keep your garden bugs at bay.

Release the ladybugs: These insects and others such as praying mantis are natural predators to garden pests. Ladybugs especially like aphids, one of the more common pests. Beneficial bugs like these can be bought in garden supply stores or by catalogue. You can also grow plants that naturally attract these “good” bugs like lemon balm and dill.

Good old soap and water: Mix 1 cup vegetable oil and 2 teaspoons of a bleach-free natural dish soap with 2 cups of water in a spray bottle. Spray, coating the plants; under the leaves as well. Do this out of direct sunlight during the coolest time of day. This coat will smother existing insects as well as deter future ones from infesting.

Beer: My mom used to place shallow pans filled with beer around the garden. Insects find beer much more appetizing than leaves, and dive to their drunken demise. (As if I need another reason to love beer.)

Garlic: Many pests have an aversion to garlic. Put large chunks of several garlic cloves in a spray bottle filled with water. Let stand for several hours. Spray affected plants with this garlic-infused water as directed above.

Copper tape and organic killer bait: Snails, although rare in the desert, are being seen accumulating around lawn edges and moist planting beds. To deter snails, wrap copper tape around planters and planting bed borders. When snails pass over copper, there’s a chemical reaction with their slime that creates an electrical charge. Also useful, organic products like Natria Snail &Slug Killer Bait are safe around people, pets, vegetation and wildlife.

Diatomaceous earth: Add this powder around affected plants. It’s a silica-based product that naturally causes many insects to dry up and die, but is not poisonous to humans or pets (unless you have a pet tarantula, like my nephew does).

Sometimes it’s best to call in the pros. Scorpion infestation, hornet and wasp nests, grub worms — these are often best left to reputable pest control companies. Michael Leobold, co-founder of Green Wave Pest Solutions in Las Vegas explains, “Pest control is maintenance not magic, meaning no one treatment will or should be the end-all solution to any pest issue. Products applied will break down over time due to UV (ultraviolet) rays, bacteria, weather conditions and fungi, so setting up an integrated pest management plan with a professional is critical for maintaining desired pest presence level.”

As for those leafcutter bees that chomped through my rose leaves, apparently there’s no effective pesticide for them. Rather than eat the leaves they use the pieces to make chambers for egg laying. They’re also essential pollinators and should not be killed. (I know … but I still hate ’em.) The solution is to put netting over the affected plants and seal any opening where they’ve tunneled.

Now you’re naturally armed to keep those critters crawling away from your garden.