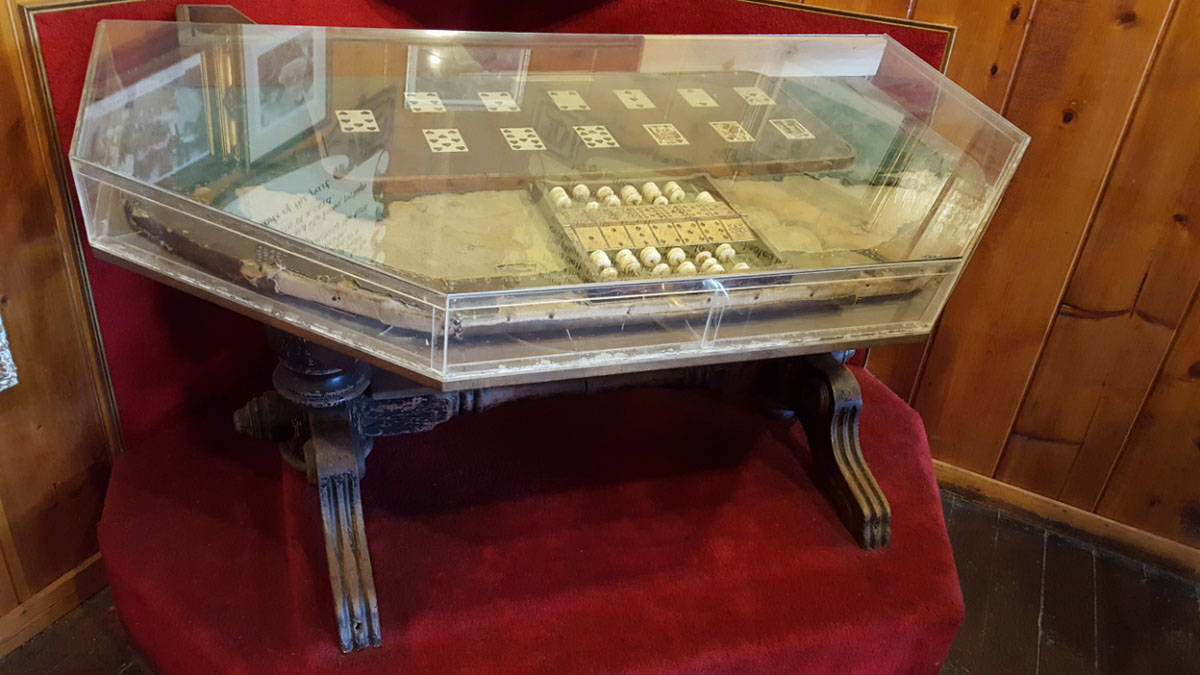 (Dave Maxwell) The “Suicide Table” in Virginia City, Nevada, may be cursed. Stories are told about the men who owned the table and committed suicide at it after gamblers had a lucky streak and they couldn’t cover the winnings.

It’s a story about a game of chance that turns deadly. Some even speculate there may have once been a powerful curse that lurked in the heart of the Old West, for example, at a particular gaming table in Virginia City.

By 1891, as the gay ’90s were happening back East, Virginia City, as it had for the previous 30 years, simply exploded from a small western outpost to one of the most famous mining communities in the world, due to the discovery and development of the fabulous Comstock Lode.

Miners were more than likely to spend their money on women, gambling and booze, in whatever order they preferred. And others in Virginia City had bigger ideas.

One who did was a successful businessman named Charles Fosgard, who had grown quite wealthy. Historians say that Fosgard wanted to reinvest his money and decided to go into gambling. Plenty of casinos and saloons along C Street could accommodate his interests. And what Fosgard did was buy a gaming table he found tucked away in a rear storeroom of the Delta Saloon. “A stroke of good fortune,” he thought.

Fosgard changed the layout of the old, well-worn table and turned it into a blackjack table. Some gamblers won at blackjack; most did not.

In time, however, an unnamed miner, having had too much to drink, stumbled into the Delta and, after losing hand after hand at the table, decided to bet his last possession, a gold ring, against a $5 coin. To the surprise of the miner, and all around, he won the pot. In turn, he bets again and again and wins again and again.

A fabulous streak of individual good luck was being witnessed by all watching. His winning streak continued and, as the evening progressed, Fosgard had to pay out $85,000 — over $2.5 million today.

As the miner continued to win at blackjack, Fosgard was forced to turn over his string of horses and his share in a local gold mine. His wealth was demolished and, in a fit of despair, he drew his revolver and committed suicide right at the table in full view of onlookers.

It wasn’t too long before rumors start to circulate that the table itself is to blame, bewitched by some unknown curse and, indeed, the table does have a history.

Many years earlier, in 1861 as Virginia City was slowly growing in importance and notoriety, at the same time a new table card game was sweeping the country, a game called faro. Its popularity was enormous. One eager gambler was a man called “Black Jake.” He had a reputation in Virginia City of being very greedy. He buys a table and with the faro craze in full swing, miners lose a lot of money.

Historians note that those who lose heavily, night after night at faro, were like relish to Black Jake’s greedy nature as he planned to make a fortune on the new card game. One night, a bold miner bets it all on the game’s final hand and Lady Luck favors him to the tune of $70,000.

The house can’t make that high of a payout. Devastated by this, Black Jake thinks for a moment, steps back from the table and shoots himself in the head.

A few years later, another man whose name is lost to history, owned the same faro table and also commits suicide at the table due to a bad turn of events.

Now the table has a history of incredible deadly misfortune for any who owned it. So, it is put away in storage and not used again until Charles Fosgard buys it in 1891 and sets it up as a blackjack table.

If a curse really is there, Fosgard, as some believe, unleashed its terrible powers and became its final victim.

The Delta Saloon was extensively damaged by a gas explosion on March 11, 2019. Repairs are still not finished on the building. However, the “Suicide Table” emerged remarkably unscathed in the explosion and now sits, cordoned off and protected, in the Delta’s sister establishment, the Bonanza Saloon, down the street.

It is still an item of special interest and intrigue on a visit to Virginia City, or just about anywhere else, when you go in search of Nevada’s yesteryear.

(Adapted from the Virginia City Tourism Commission and a story on the Travel Channel.)