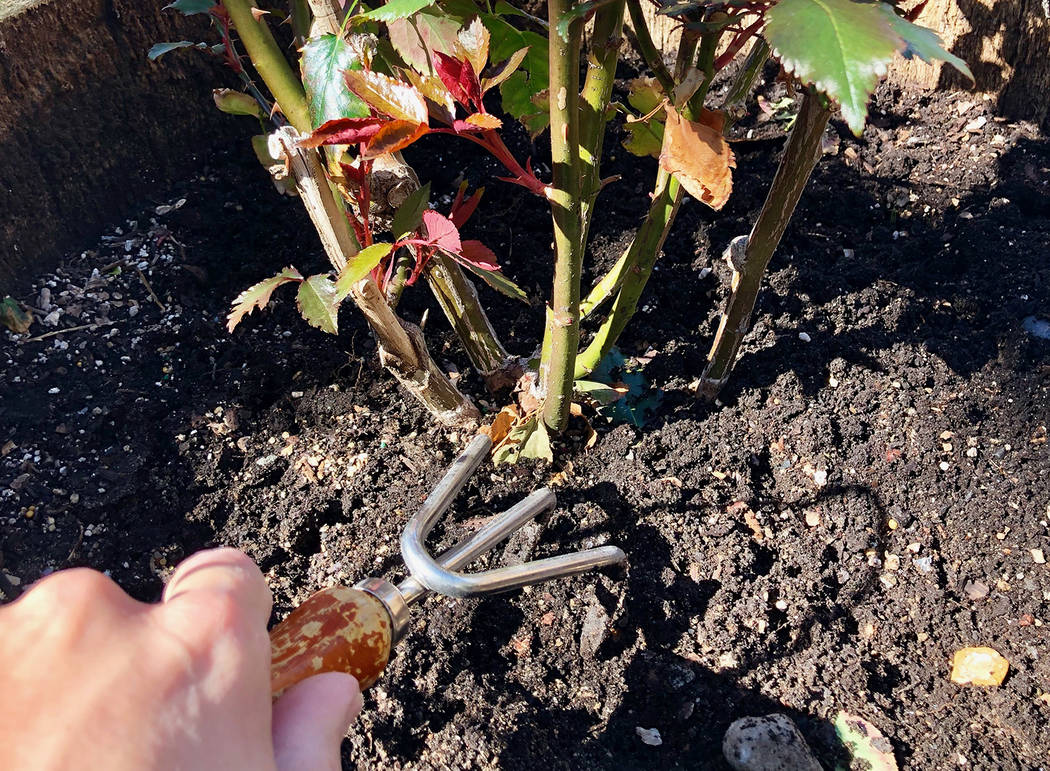 (Norma Vally) March is when you should prepare your garden for the spring and summer growing seasons. Trees and shrubs should be trimmed or pruned and soil should be amended.

Growing up in an Italian neighborhood of Brooklyn, “Marzo è pazzo” (March is crazy) is a saying I would often hear this time of year; it’s an expression that certainly holds true in Boulder City. March is the most unpredictable of months here, where, from one day to the next, temperatures can make us grab for a winter coat or break out a bathing suit.

Erratic as it is, March assuredly “marches” into spring, bringing steadily rising temperatures and ideal conditions for gardening. With the ground beginning to warm and before the real heat hits, March is the pivotal time to get your garden ready for a flourishing growing season.

Water brings life, so to get your garden going, start at its watering source. First check that your irrigation system is working properly: no broken sprinkler heads or emitters, clogged screens, etc. Flush the irrigation lines to clear out debris; locate the end cap and briefly run the water. Inspect inside valve boxes for debris or mud.

Before resetting the irrigation clock, remember to adjust to daylight saving time. Also, be sure to wait until there are consistent daytime temperatures in the 70s before increasing water times. Don’t make the mistake of overwatering as it could instigate fungus growth and root rot, not to mention waste water.

Per http://www.BCNV.org, the watering schedule for spring — March and April — is three days a week, with your home’s days assigned by group. You can find your watering schedule and group map on the city’s website or you can contact the city’s Department of Public Works.

After water comes food. Feeding and rejuvenating soil in March is paramount for a healthy growing season. A nitrogen-rich fertilizer for your leafy trees, shrubs and vines will promote new growth through the spring. Hold off on feeding palms and cactuses until later in spring. Using a premium soil amendment will introduce beneficial microbes, trace elements and pH conditioners that will restore the natural balance in the soil.

Pruning and trimming plants, trees and shrubs should also happen in March. The terms pruning and trimming are often used interchangeably, but they are different in that trimming refers to shaping while pruning entails removal of dead or overgrown branches or stems, especially to increase growth. Pruning supports healthier vegetation, manages pests and insects and, specifically with trees, can protect person and property from falling branches that are dead or diseased.

Keep an eye on temperatures before pruning or trimming. Because we can have a frost until mid-March, cutting too early could open up plants to real damage should temperatures drop for a last-licks freeze.

It is recommended that in March gardens are sprayed for weeds, diseases and insects. Pre-emergent herbicides should be applied to lawns to prevent the germination of weed seeds. Using dormant sprays, a generic term used to describe a spray applied to trees and shrubs when they are in an inactive state, is an effective way to kill overwintering insects and disease organisms.

Using this type of spray can reduce the necessity for multiple and more harmful sprays during the growing season. The axiom “an ounce of prevention is worth a pound of cure” is applicable in the pesticide world.

Mid-March is the right time to start planting your vegetable garden. Veggies that do especially well here are warm-season vegetables, such as tomatoes, beans, peppers and eggplants. Getting them in the ground mid-March to early May will give them time to reach maturity before the heat of summer causes temporary dormancy.

While we do experience a climate kind of “madness” this time of year, laying the foundation for a successful growing season in March is sound advice.