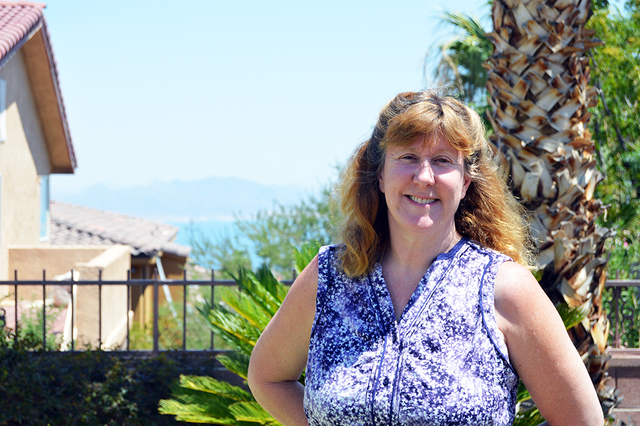 Lisa Savy, seen in the backyard of her house in Boulder City, spends her time writing screenplays when she is not teaching math at the College of Southern Nevada. Her latest film, “Dreams I Never Had,” is currently in post production and will possibly be on the film festival circuit. Max Lancaster/Boulder City Review

Picture a film where a 12-year-old girl is held captive as a domestic laborer by an affluent family in California.

Imagine this girl befriends a migrant worker named Emilio and through their mutual hardships the two young captives kindle a strong friendship that leads to their escape.

Now imagine that escape leads to their captors’ impending trial that allows them to live their lives freely for the first time.

The film that you are imagining is real and it was written by a Boulder City resident.

Lisa Savy’s “Dreams I Never Had” is a film based on a true story of a 12-year-old Middle Eastern girl named Layla, who was held captive as a domestic laborer by an affluent Middle Eastern family in Southern California.

Savy said the characters in her film really spoke to her.

“I think writing this movie was a really good experience for me because I have never worked with a character like Layla before,” Savy said, referring to the main character’s Middle Eastern origin. “I also like her because she is such a strong female lead — a person who goes through adversity and gets through it.”

The story focuses on the immoral nature of human trafficking.

“The story addresses the issue of human trafficking. An estimated 27 million people are trafficked across international borders each year with 20 percent of them being children,” according to the press release from Savy’s production company, Balancing Act Pictures.

The film is directed by Mahmoud Kamel, whose work has been shown at the Cannes, Venice and Berlin film festivals.

The film features Malcolm McDowell, who has starred in a number of films including “A Clockwork Orange” and “The Artist,” which won the Academy Award for Best Picture in 2011.

Savy said it was an incredible honor to have McDowell appear in her movie.

“It is so cool to have Malcolm McDowell play in a movie I wrote,” Savy said. “I was disappointed because I was not able to get to Los Angeles to meet him; but it is an honor to have him in my film.”

The fact that “Dreams I Never Had” was produced was a surprise to Savy since the film had been in a constant state of limbo since she wrote it eight years ago.

“I wrote the script eight years back, but the money to make it just kept falling through,” she said. “At one point we had a producer go as far as auditions, but the money wasn’t there. But they finally got the money and made my movie.”

Savy is not a full-time screenwriter; most of her year is spent teaching math at the College of Southern Nevada. She spends much of her free time writing screenplays.

“I love to teach,” Savy said. “But if I am being honest, we have a lot of free time throughout the year. I probably have 20 weeks free each year so I spend that time writing movie scripts.”

Savy said her brain functions the same when she is writing a movie script or teaching math.

“Screenwriting is a lot like math in terms of the structure. There is a formula to writing a movie and things need to be structured a certain way to work,” Savy said. “I think that is why I like writing so much, because it works really well with my structure-oriented brain.”

This is not Savy’s first foray into screenwriting. In fact, it is not even the first time the Boulder City resident has seen one of her screenplays produced into a movie.

Her first screenplay, “Defying Gravity,” which Savy produced, was turned into a film that was shown at a number of film festivals, including the Fallbrook Film Festival and the Digital Video and High Def Festival in 2008.

Savy said she learned a lot about the realities of filmmaking from her first film.

“I really learned a lot about the process when I was making ‘Defying Gravity,’ ” Savy said. “I spent way too much money on that movie. If I made it today, I could have made a better movie at half the cost.”

Savy said she has thought about moving to Los Angeles where she could find a larger pool of actors, but she loves her home in Boulder City.

“I love Boulder City. I love the people. I love the bighorn sheep that visit me every morning,” Savy said. “The whole town is a great place for a writer; it is beautiful, quiet and secluded.”

Savy said she does not have much interest in moving now that she has made Boulder City her home.

There is no release date for “Dreams I Never Had” as the film is in post-production. A trailer for the movie can be viewed at http://bit.ly/2aWqWzH

While she waits for the release of her movie, Savy is not sitting idly. She is working on new projects, including writing a biopic about legendary salsa dancer Luis (Maquina) Flores called “Maquina.”

She also is working on an Indiana Jones-type adventure with a female lead called “The Amulet of Destiny.”