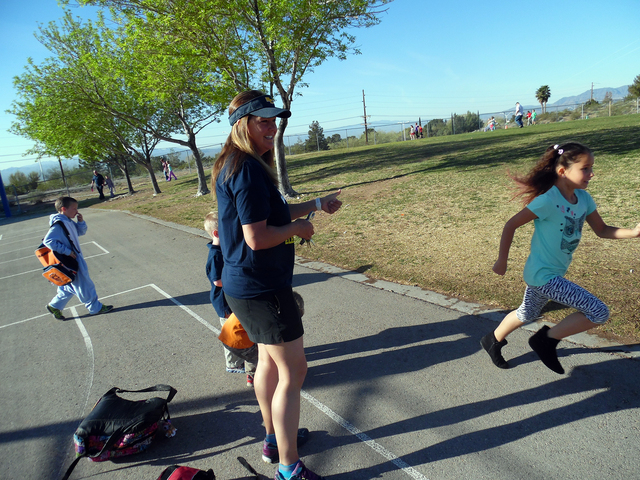 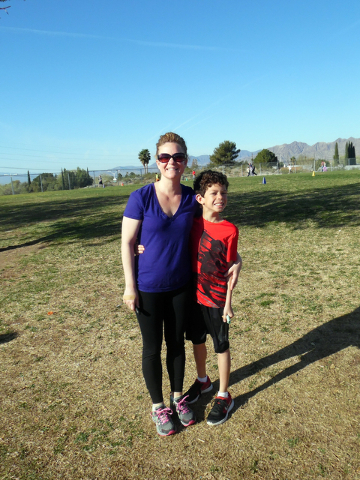 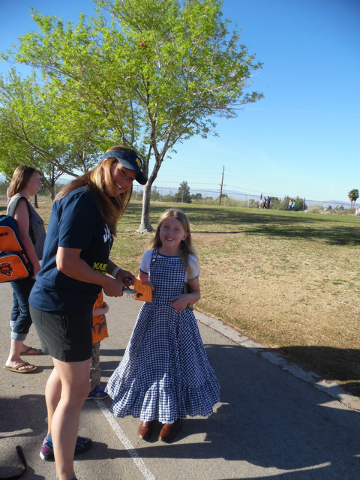 It has been said that a person’s success can be measured by the strides he or she takes.

The kids at King Elementary School have taken that phrase to heart.

Each morning Sara Fisher, the physical education teacher at King, meets the kids and several parents on the grassy field behind the school to walk laps.

Each child has a punch card and, as they pass by Fisher or one of several helpers, they can get a punch along the edge of the card. Each walker receives a punch per lap; with 60 punches the card represents 10 miles. The cards are printed on brightly colored paper and and each one literally represents a milestone in the number of laps a child walks or jogs. The cards also contain facts that the kids can learn for various programs like The Great American or Nevada Citizen.

“Statistics show that children who exercise before school and get moving have noticeably higher test scores,” Fisher said.

In the days before school buses and parent drop offs, children were accustomed to walking to school and home afterwards. They got this same exercise without thinking about it. With modern society and technology who knew we were doing our kids a disservice by giving them a ride to school.

Fisher and her cadre of volunteers, teachers and parents have brought that exercise movement back to the beginning of the day.

Her Jogging and Walking Stars club, or J.A.W.S. as it is more commonly called, takes place from 7:50 to 8:10 each morning. Naturally, a shark serves as the group’s mascot.

“Some of our kids have reached more than 100 miles, at least five I can think of right off the top of my head, and more than 30 have received their 50-mile charms,” Fisher added.

The “charms” are simple plastic numbers, about 1-inch square and are the pride of the walking groups. The students cheer each other on and push parents to come along as well. The charms are proudly displayed on sneakers or backpacks and the competition to get more charms is fierce among some of the students.

Jayden Thackery was King’s first 100 miler, with mom Tara right beside him and cheering him on.

Other schools are picking up on the idea and groups can be seen all over town getting their miles in before class.

One dad, Jeff Alexander, explained that the morning walks with his daughter Kaitlin are the only exercise he really gets during the day and it also gives them an opportunity for some quality father-daughter time.

“We talk about homework and what’s going on in the family, or whatever is on our minds,” he said.

There is a movement in Boulder City and the kids are leading the way.

Fisher always welcomes more walkers and keeps a huge bag of charms nearby. So if you want to get motivated in the mornings before school, put on your walking shoes and join in the fun.