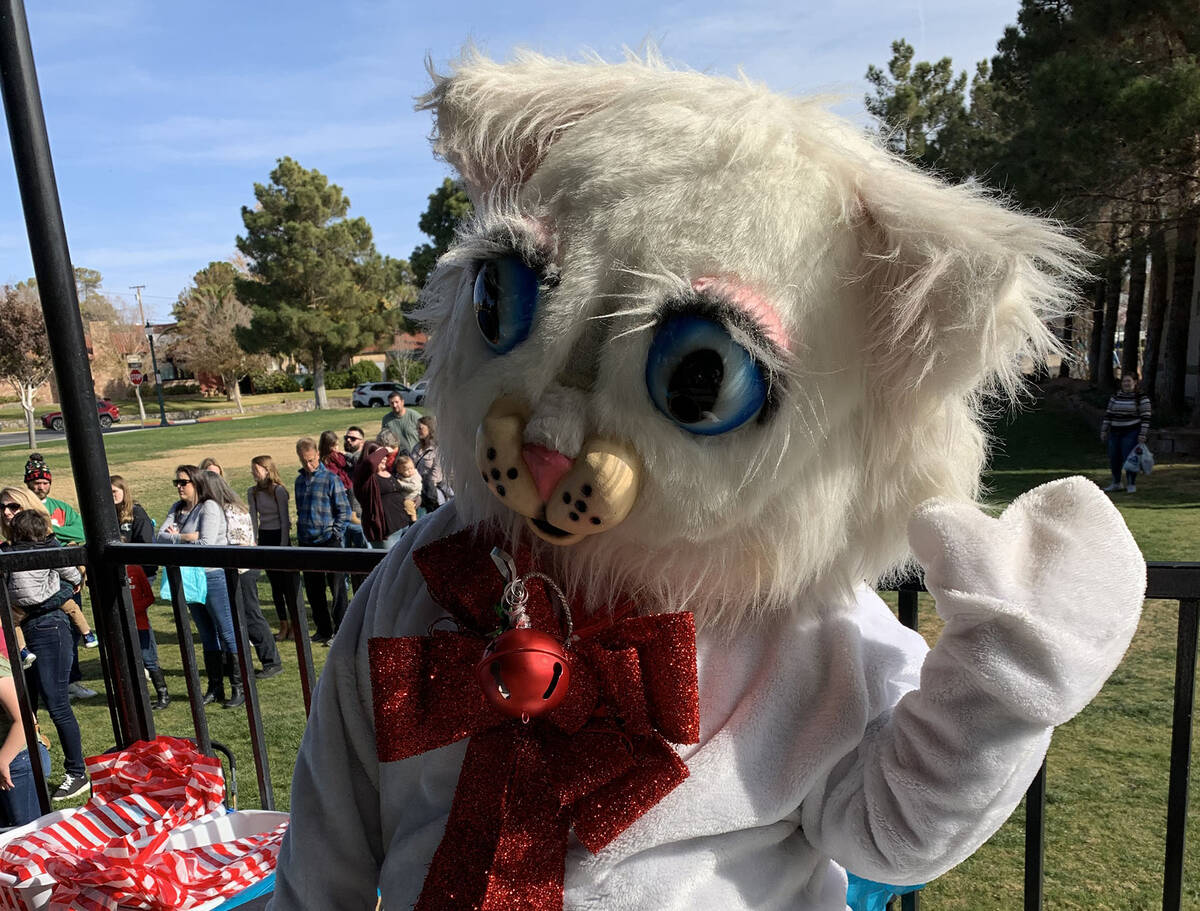 (Hali Bernstein Saylor/Boulder City Review) The mystery of how Jingle Cat, seen at Santa's Picture Party on Saturday, Dec. 3, 2022, came to Boulder City has been revealed by Jill Rowland-Lagan, CEO of the Boulder City Chamber of Commerce, who first donned the costume 21 years ago.

Jingle Cat was born after the unintended demise of a previous Christmas mascot named Chris Mouse. Connie Mancillas, a member of the chamber’s board of directors, created the character when Rowland-Lagan first joined the board in June 2001.

“She was an amazing seamstress, she could make anything,” Rowland-Lagan said.

Mancillas made the costume for Chris Mouse, including a dress and “face mask, helmet kind of thing.” Chris Mouse would traditionally light the community Christmas tree with a wand and a script was built around the event.

Unfortunately, the costume was not stored properly and when Rowland-Lagan uncovered it, mice had gotten to it.

“A mouse had literally nested in the helmet, so mice were infesting Chris Mouse,” Rowland-Lagan said.

Board members tried saving the costume, but it was impossible to repair and they needed to find a solution. Chad Blair, who was president of the chamber of commerce at the time, facilitated the discussion.

“One of the ideas thrown out there was a carp,” Rowland-Lagan said. “I thought that would be a very bad idea.”

After failing to come up with a character, the board enlisted the help of local creative professionals Characters Unlimited and landed on a white cat.

“The thought process behind it was it looked friendly and children will love it because it’s a kitty,” Rowland-Lagan said.

The script changed slightly to Santa’s cat coming down from the north pole to light the community Christmas tree and the new character needed a name.

“We were looking at putting a bell on her collar like most cats have,” Rowland-Lagan said. “It was a jingle bell, so she was a Jingle Cat.”

Rowland-Lagan said Jingle Cat’s creation was the catalyst to Santa Claus being added to the tree lighting ceremony.

“We added Santa in because it was Santa’s kitty and over the years, Mrs. Claus was a part of it as well.”

The costume is 20 years old and had to be pieced together with a rabbit body this year.

“The current costume that’s been used for the past 20 years was sponsored by Tony’s Pizza,” Rowland-Lagan said. “Jingle Cat has had a facelift, but unfortunately the costume is falling apart.”

Everyone in Rowland-Lagan’s immediate family was been a mascot at some point.

“We are a family of mascots,” she said. “It’s a family joke in our house because when Barry and I were dating and got married, he was McGruff for the Las Vegas Metropolitan Police Department.”

During the Christmas parade, her daughter Abigail is Jingle Cat since Rowland-Lagan is hosting.

“I generally try to keep it in the family because the costume gets sweaty and gross,” she said. “That helmet is hard to clean; it’s really because of cleanliness and I don’t want to share germs with anyone.”

Establishing the “mascot concept” by including Jingle Cat in as many community activities as possible is important to Rowland-Lagan.

“We’re trying to create community, promote local businesses,” she said. “I have always found characters have been beloved in other brands, so it was just an easy fit to have that Christmas character and have it carry over to other events throughout the year like Fourth of July.”

Jingle Cat will be making a grand appearance at the Best Dam Mascot Madness Wine Walk on Jan. 14 along with other mascots from sports teams and the community like Rooty Root Bear from A&W and the Boulder City High School’s eagle.