(Bob Morris) The almonds on this tree have been stolen and the husks chewed open, probably by ground squirrels. 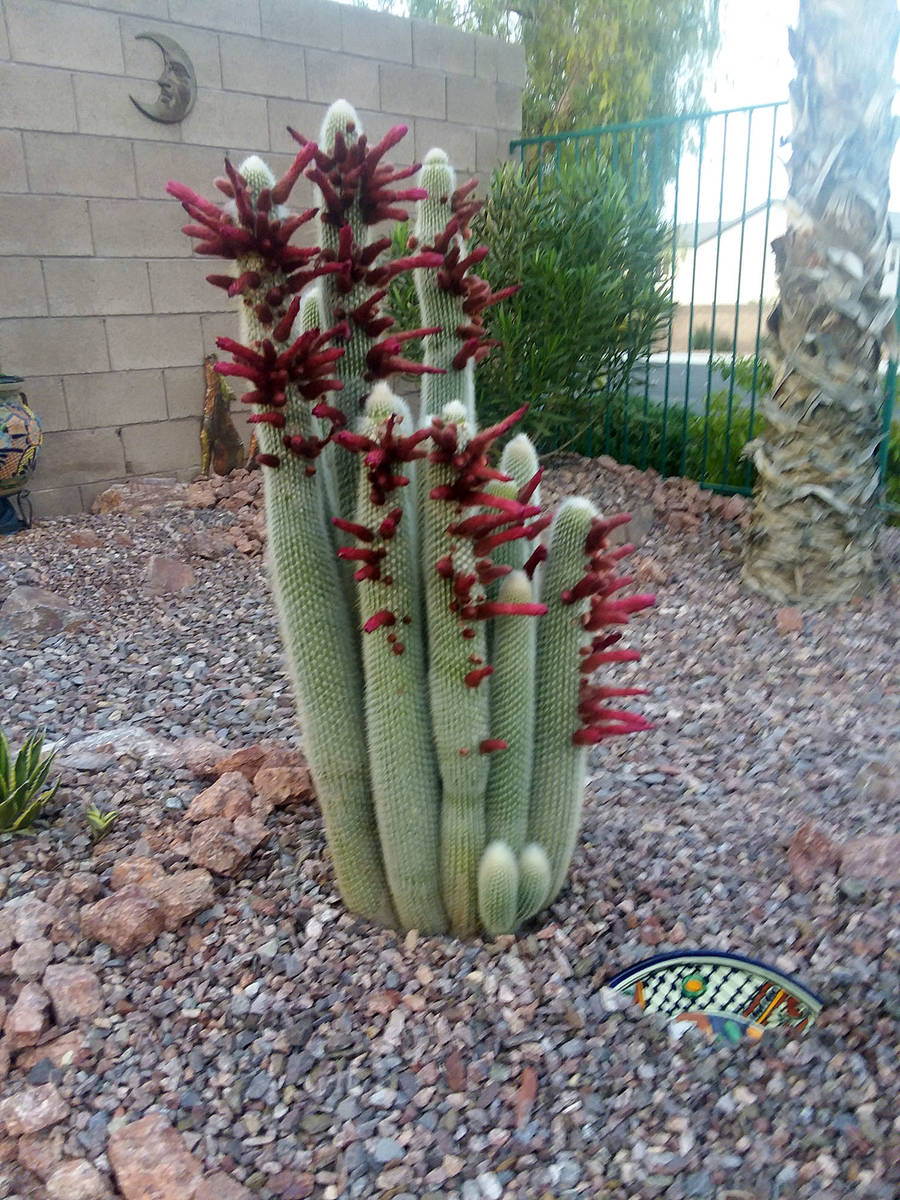 (Bob Morris) Silver torch cactus, such as this clump, originally came from the higher elevations of Bolivia and Argentina. 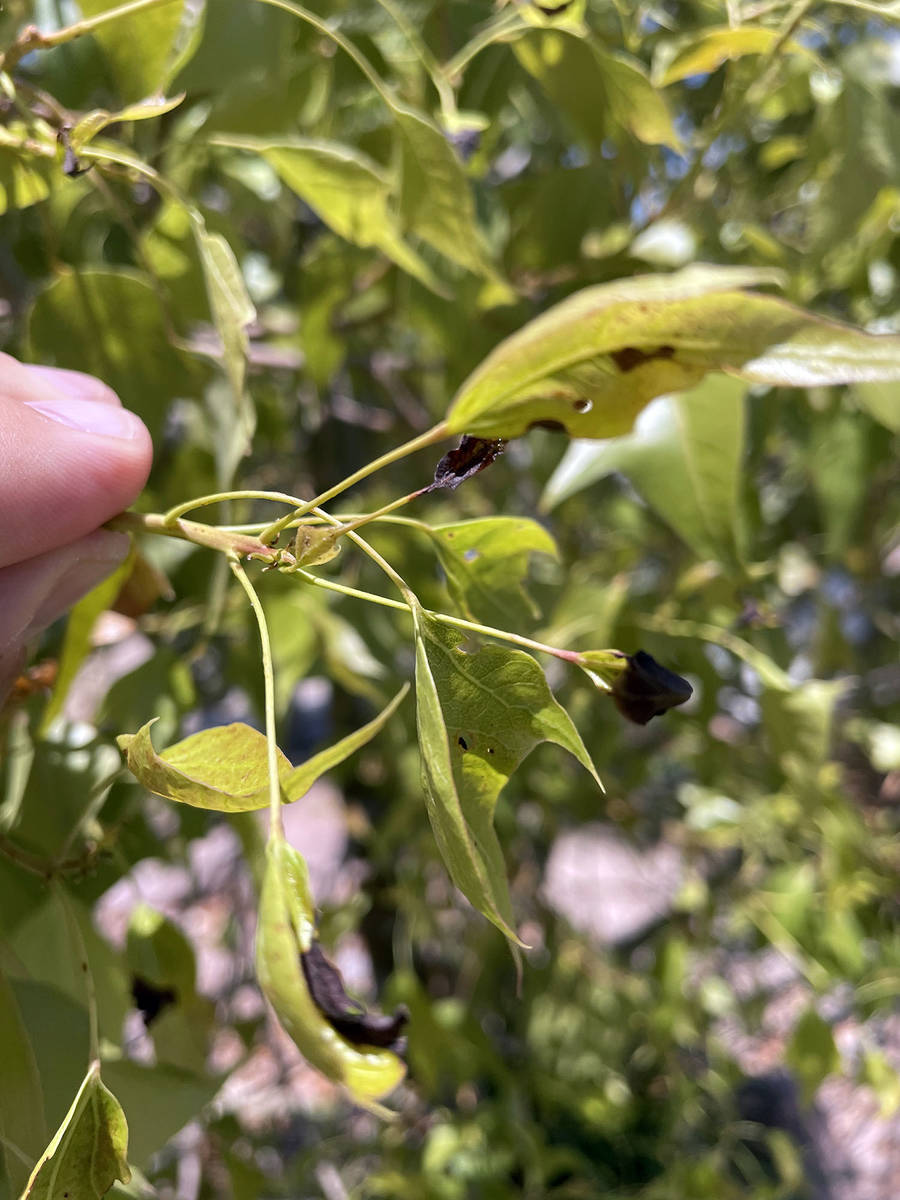 (Bob Morris) The leaves on this bottle tree are dried up and “crusty.” 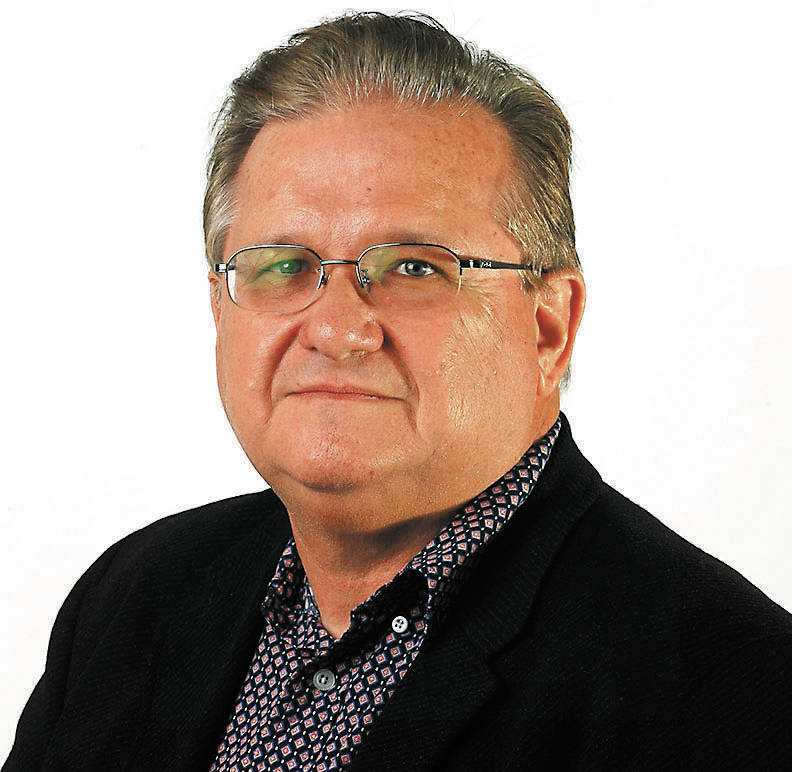 A. Not sure why you thought the tree looked worse after you watered it. This tree’s roots are sensitive to watering often and keeping the soil wet. It’s a “deserty” kind of tree, but not truly “deserty.” As a young tree, it needs about 20-30 gallons each time it is watered. You are watering the right amount, but the soil shouldn’t be continuously wet six days a week. That’s a mistake.

The roots need a chance to “breathe” after the tree is watered. Knowledgeable people from the Phoenix area suggest watering this tree only twice a month during the summer. Remember, Phoenix is a bit wetter than we are because of its summer monsoons and it gets more cloud cover.

My advice is not as dramatic, but I think not giving the soil a chance to dry out between irrigations is a mistake with this tree. Starting this October, try watering less often, maybe twice a week. Apply water to the soil starting 12-18 inches from the trunk. This water should wet the soil all the way to the ends of its branches (canopy). This tree likes to have other smaller “deserty” plants getting water near it. Other plants help cool things down.

Apply enough water so the soil is wet to a depth of about 24 inches. This takes somewhere between 1 and 2 inches of water so that will take about an hour or so. Then hold off on your next water application until the top 4 or 5 inches of soil starts to dry out. Then water again. This might result in watering once, twice or three times a week depending on the time of year. Watering fills the soil again with water and then wait long enough for the tree use it. The upper surface of the soil will begin to dry. This drying of the soil encourages deeper rooting of the tree and helps avoid root diseases due to frequent watering. That’s normal.

Use an inexpensive soil moisture sensor (like the kind sold for houseplants) and gently push it to into the soil about 4-5 inches deep, soon after an irrigation and in several other spots. When the soil moisture averages about “5” on its meter, water again and fill up the soil.

Q. Something has been eating my almonds. I heard it was ground squirrels or rats. I’ve never seen either in my yard or neighborhood in the 12 years we’ve lived here. Any other possibilities?

A. The varmint was chewing the outside husk and stealing the almond inside the husk, leaving part of the husk behind. They drop the husk chewed off onto the ground. This sounds like ground squirrels to me. Ground squirrels are the number one pest for stealing almonds. I have had ground squirrels clean out an entire 15-year-old almond tree of nuts overnight.

But rats will eat anything so they have a lot more to pick from in the summer. Like garbage. I don’t know if they will want the nuts at this time of year. Because it is just the nuts and there is plenty of other food around, I am putting my money on the ground squirrels. I don’t know of any other critter that will take almonds this time of year. To control this problem, I removed the ground squirrels with concealed poison bait but traps are available.

Q. I have several bottle trees, now over 7 feet tall, damaged by two windstorms close together. After the windstorms, the branches were sagging and the tree looked pitiful; the tree looked like it was in shock. Next morning I watered it thoroughly for about 5 minutes with a hose. The tree looked happier. The trees are watered twice each day for eight minutes by drippers and surrounded by rock mulch.

A. I’m not a big fan of watering daily and watering trees for only a few minutes each time. Basically you give them a sip of water every day instead of a big gulp all at once. I understand that some irrigation systems will allow different irrigation scenarios. Now is the time to bite the bullet and change all that.

Put trees and shrubs on different irrigation lines from the much smaller plants that must be watered daily. Please realize that as trees get bigger they need more water, and they need this water applied to a wider area. This means adding more drip emitters under the tree every three or four years as large trees and shrubs get bigger.

Tree roots grow where water is applied. If water is applied close to the trunk, that’s where roots will grow unless there are other plants nearby also getting water. Roots growing close to the trunk (because that’s where all the water is) increase the chance of the tree blowing over in a strong wind. They must survive on the water that you give them and where it’s applied.

What to do? Add more emitters under the tree canopy about 18 inches apart. Spread them apart. Apply water to a larger area under the tree canopy. And water for a long time. Add these emitters to previously dry areas further away from the trunk. Instead of watering twice a day, water every other day, only once, but water for 30 or 40 minutes instead. Pretend you are filling a reservoir of water and let the tree use half of it, then water again and fill it.

Want to know when to water? Buy a thin piece of rebar about 4 feet long and push it into the soil after you finish an irrigation. The rebar slides easily into the wet soil where water is applied and then it stops. If it stops at 15 inches deep and you want 18 inches, add another 10 minutes to your irrigation to get it deeper or change to a larger emitter. Rebar is difficult to push into soil where the applied water no longer reaches. A tree like a bottle tree should have wet soil from an irrigation about 24 inches deep when it is young.

Q. I have a clump of silver torch cactus about 7 years old and some of the columns appear to be shrinking in diameter. It appears to me that the smallest column is narrowing in diameter about 4 inches above the soil line. The largest one also appears to be narrowing at the bottom as well. I don’t water from November through February and start watering again in March and April and September and October and fertilize twice a year with a cactus fertilizer. In the summer months of May through August I water twice a month. There are no soft spots near the ground and no pests I can see. What do you think?

A. This is a clumping cactus that grows to about 4 feet and can handle winter temperatures to about 20 F. It also likes high, intense sunlight but cooler temperatures than ours in the summer. For that reason, it performs better if it does not get intense heat during the hottest time of the day in the summer. Make sure it gets some shade if it is on the west side. Also, I would give it one more irrigation during the cooler months but your timing of irrigations look good when its hot and the soil does not stay wet. Don’t water more often than that.

Silver torch cactus is from the dry higher elevations of Bolivia and Argentina and not from one of our deserts. It struggles during our hot summers starting in the low 100s and particularly in hot locations (such as a western exposure in full sun during June-August). It is not from the Mojave Desert. Surrounded by rock in these locations makes it even hotter.

Many cacti have narrower stems at the bottom as they get older. Older stems get “woody” at their base and can’t expand and contract as they store and use water. They also develop constrictions along the length of long stems when their growth ends.

If you have checked for soil drainage and root rot, then I don’t think their narrowing is a problem.

Q. I have a 10-year-old “All-in-One” almond tree that is healthy and produces an abundance of nuts. Most of the nuts are not edible because they are dry and hard. Is this due to the desert conditions here? I have tried picking at different times, boiling and roasting them. Any suggestions?

A. All-in-One is a good variety of almond for this climate. It is a self-pollinating, semi-dwarf variety with good nut production here. Great for a backyard.

Something is wrong. Check for damage to the nuts from insects like the leaf footed plant bug. The mama insect can fly in from your neighbor’s yard around the end of March or early April and start raising her young. It doesn’t take long and she and her brood start feeding by sucking the life out of the nuts as they are developing. This causes the nut to abort leaving a husk that shrivels and dies.

You say you are checking the nuts as they develop but start splitting the husks open in about late March or April. Check the nut development inside the husk and look for these bugs causing damage at the same time.

They are normally harvested in Las Vegas in July or August. 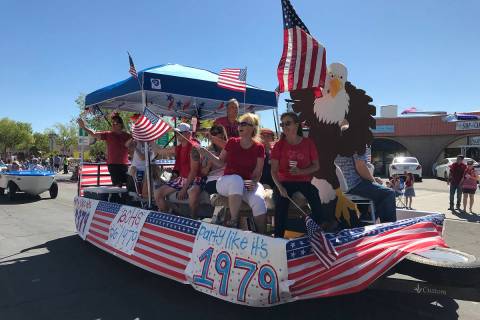 The upcoming two-day Damboree celebration will be a great time for families, friends, neighbors and visitors to gather in Boulder City, spend time together and celebrate the Fourth of July.