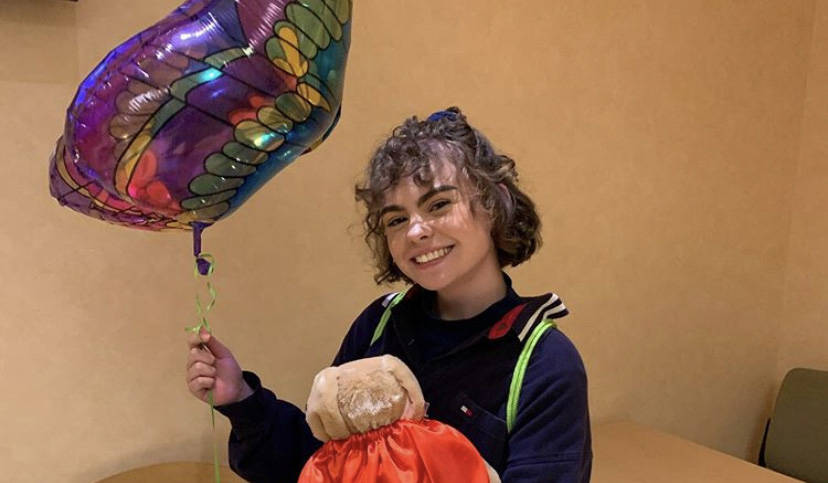 (Mallory Carvalho) Mallory Carvalho took a series of self-portraits to chronicle her battle against a rare form of ovarian cancer. The 18-year-old, the daughter of Amy and Tom Carvalho, is studying nursing at Rutgers University.

(Mallory Carvalho) This self-portrait of Mallory Carvalho was taken after she lost her hair to chemotherapy while being treated for a rare form of ovarian cancer. Her series of photos aims to provide a positive message of hope to becoming a cancer survivor.

As a photography student at Las Vegas Academy, Mallory Carvalho has always looked at life from a different perspective.

So, when she was diagnosed with a rare form of ovarian cancer at age 16, she turned to her camera as a way to express her feelings and chronicle her illness. Her year-long series of photographs turned into much more than a personal journal. It became a symbol of hope and inspiration.

“As I researched photography projects of people going through treatment I didn’t find any that didn’t result in death,” said the now 18-year-old. “I wanted to switch it up … take away the stigma and to show there are survivors. I wanted a positive ending to it.

“I tried to put myself in different places,” she said about the images she created during the various stages of her treatment.

“I imagined myself in a rain forest,” she said.

Each group of photos involved a self-portrait. She said her intention was to show the healing process.

A picture featuring Carvalho in an unmade bed with the sun streaming through the window was meant to convey the strength needed to get up every day. Another shows her wearing a wig with her hair poking out.

She said she wore a wig most of the time during her treatment and many didn’t realize she had lost her hair. It masked what was going on, Carvalho said of her wigs.

“Hair is such a big part of growing up, especially for an adolescent,” said her mother, Amy Carvalho, who co-own the 7-Eleven on Nevada Way with her husband, Tom, and serves as a regent for the Nevada System of Higher Education.

In fact, it was Mallory Carvalho’s sense of fashion that was a key indicator that something was seriously wrong and prompted them to seek medical assistance.

According to Amy Carvalho, her daughter wore sweatpants to the first day of school her junior year, which was completely out of character for her.

Although she had been complaining about a stomachache, Amy Carvalho said she didn’t think it was anything out of the ordinary and that her daughter had just overexerted herself in the summer heat.

Mallory Carvalho said she threw up that first day of school and just didn’t feel she could return for the second day.

“It was surprising. She liked going to school and hadn’t missed a day of school since kindergarten,” said Amy Carvalho, adding that her daughter attended Boulder City schools until she was accepted in the arts academy.

A trip to their family doctor and an ultrasound revealed a mass. Unable to find a gynecologist that worked with children, they ended up in the emergency room at St. Rose Hospital where a doctor, who had treated someone with the same type of cancer before, realized it was an urgent situation and scheduled surgery for two days later.

A final diagnosis about what type of cancer it was didn’t come until several weeks later because it was so rare and they needed more than one opinion, Amy Carvalho said.

When it came time to select a clinic for chemotherapy, they chose one that specialized in pediatric cancers vs. ovarian cancers because of the “care culture,” Mallory Carvalho said.

It was a decision that had rippling effects.

It was not surprising that her cancer diagnosis would forever alter her life, but it was somewhat unexpected that it changed the focus of her education and future career path.

Because she had been treated at a clinic that specialized in pediatric cancers, Mallory Carvalho and her family, which includes dad, Tom, and brother, Anthony, were introduced to Candlelighters Childhood Cancer Foundation of Nevada.

In the summer of 2019 she was serving as a junior counselor at Camp Independent Firefly, a medically supervised camp for diagnosed children and their siblings that is co-sponsored by the Nevada Chapter of the National Hemophilia Foundation.

An 8-year-old girl with hemophilia needed a blood transfusion and Mallory Carvalho took her to the medical facility for the procedure.

According to Mallory Carvalho, the girl agreed to the procedure at first, so staff began preparations. As the girl saw them in action and realized what was happening, she changed her mind and began crying and screaming.

However, because medical supplies were limited at the camp, Mallory Carvalho said that they would have to be discarded if they weren’t used, which was a waste of much-needed blood.

“All I was planning on doing was taking her to the nurse and bringing her back to our activity,” Mallory Carvalho said.

She ended up comforting the young girl by getting on the ground to her eye level and doing a breathing exercise she had learned during her own treatment. Although the girl realized Mallory Carvalho was trying to distract her, the doctors and nurses were able to complete the transfusion.

Later, it occurred to Mallory Carvalho that the oncologist and nurse that had treated her had now worked with her, and it was something she wanted to pursue.

In addition to helping her heal and shape her future, Candlelighters is assisting her financially, awarding her one of 21 scholarships it presented this year. She will receive $3,000 each year to use for anything college related.

Because of COVID-19, she is taking classes online, allowing her to remain at home with her family and friends, and stay in touch with Candlelighters’ community.