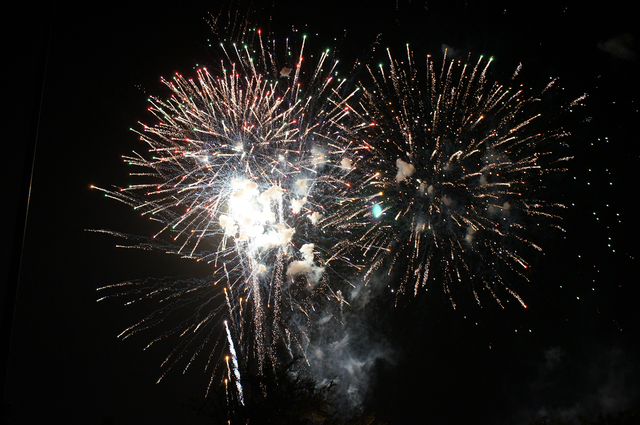 On Saturday, residents and guests from the Las Vegas Valley will be traveling to Boulder City to celebrate daylong festivities as part of the 67th annual Fourth of July Damboree festival.

The Damboree has become an iconic tradition in Southern Nevada. Boulder City’s Fourth of July parade is the oldest parade in the state’s history, according to Damboree Committee Chairman Roger Hall.

The theme for this year’s parade is “Great Americans: The Next Generation.” The grand marshals will be those who helped to implement the Great American Award throughout Clark County, as well as past students who completed the award in elementary school.

It’s fitting that the parade is rich in history, since Boulder City prides itself on its historical relevance.

“It’s one of our biggest events, and it’s one where we can really feature Boulder City,” Hall said. “It’s typical small-town, and you don’t find that in Las Vegas or the other bigger cities.”

Even though the parade begins at 9 a.m., Saturday’s festivities will begin at 7 a.m. with the traditional pancake breakfast put on by the Rotary Club of Boulder City at Bicentennial Park, 1100 Colorado St.

“It’s become one of those traditions that no one wants to let go of,” said Rotarian Christy Springgate-Hill, the club’s most recent past president. “It’s become a social tradition. Lots of families meet each other there because they split up throughout the day. It’s just one of those small-town things that everyone wants to be involved in.”

Hall said throughout the years, various state lawmakers have made appearances at the breakfast and served pancakes to those hungry guests eager to get their holiday started, but Springgate-Hill said no politicians will be on hand to help this year.

Nine hundred to 1,000 people are expected to be served during the pancake breakfast, she added.

“We go until the parade starts or until we run out of batter, whichever comes first,” she said.

A flyover from the Boulder City Veterans Flying Group will commence at 9 a.m., kicking off the official start to the hourlong parade that will make its way through the city’s packed streets. Hall said about 100 entrants are expected to participate this year.

The parade will begin on Colorado Street at Nevada Way before working its way down Nevada Way, heading west to Fifth Street. It will finish at Broadbent Memorial Park on Avenue B and Sixth Street.

One of the parade’s favorite traditions is the water zone, which begins on Fifth Street at Avenue A and continues on Avenue B until the parade’s end at the park.

At Broadbent Park, games will be played and drinks will be served from 10 a.m. to 4 p.m. The raising of the flag and national anthem will begin at 11 a.m., and trophy presentations for parade winners will take place shortly afterward.

Live bands also will be on hand, Hall added, and then kids will make their way to the Boulder City pool for the traditional money toss.

Potato sack races, tug of war and other games begin at 1 p.m., and the party will stay at Broadbent Park until guests make their way to Veterans’ Memorial Park at 1650 Buchanan Blvd. for nighttime festivities starting at 5 p.m.

Friends and family will set up camp at Veterans’ Memorial Park, where they can bring blankets and chairs and enjoy more food, games and music until 8:45 p.m. Fireworks will cap off the night at 9 p.m., but the music will keep going until 10:30 p.m.

“It’s a pride type of thing,” Hall said about the day’s festivities. “It’s a very patriotic day for us.”

Like last year, the dry lake bed will be closed for the holiday.