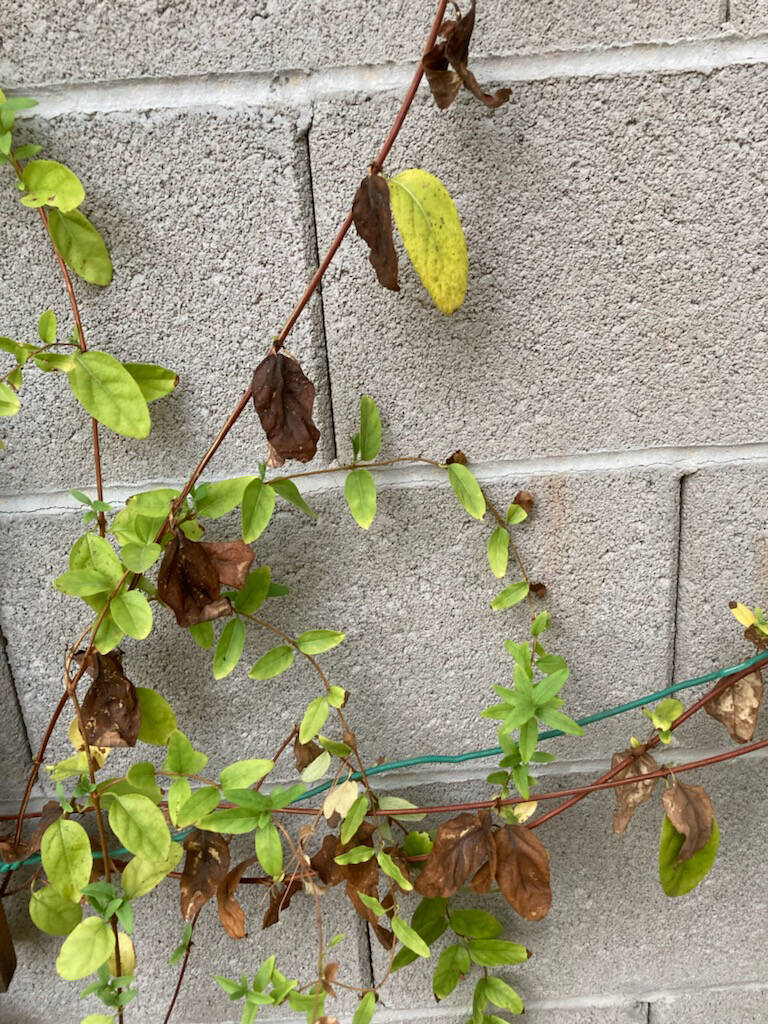 (Bob Morris) Heat radiating from a cement block wall can damage plants such as honeysuckle. The damage resembles that from lack of water. 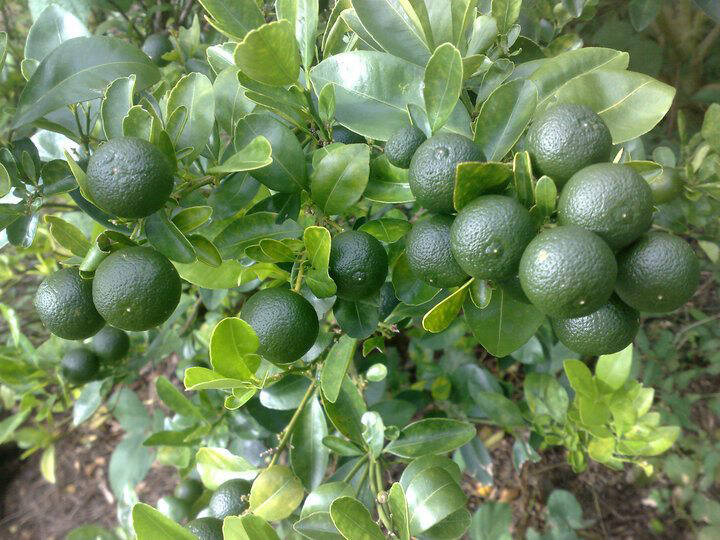 (Bob Morris) Calamansi limes are tart, small green limes with an orangish-yellow flesh. They can be grown from seed and are a good size for containers.

A. You didn’t tell me which honeysuckle it might be so I’m guessing it’s Halls honeysuckle, a Japanese honeysuckle type. My second guess is that the cement block wall is facing either south or west. Walls that face south and west are the hottest walls in the landscape. Surface temperatures of those block walls will reach over 170 F when the air temperature is slightly above 100 F. My third guess is the plants are surrounded by rock mulch (which can get very hot as well).

The bottom line is: The new growth died back because the block wall got too hot probably starting in about May. Heat damage looks very similar to a lack of water. Don’t get me wrong, Japanese honeysuckle is very heat tolerant but not that heat tolerant. Even some of the most heat tolerant climbing vines, like Cat’s Claw, can’t get established on a wall that’s that hot.

The big advantage of a vine like Cat’s Claw is that it grows very rapidly and might be able to establish itself on the wall during the cool fall and spring months before it gets hot. But once the wall gets over about 140 F very little can get established on it.

Q. The last time I counted the lemons on my lemon tree, I counted 13 or 14. Today, I only have six lemons left on my tree. Can you explain what happened?

A. I think someone stole your lemons. If a rat or other vermin ate the fruit, or it dropped to the ground, the remnants of the fruit would be near or still hanging on the tree. Usually rat damage is gnawing a hole in the fruit and it’s not removed. If a rat really likes the fruit, it will clean out the inside and leave the rind still clinging to the tree. If you don’t see anything lying on the ground, then a human stole the whole thing and put it in their pocket.

Educated animals only focus on fruit that’s ripe. On occasion I will see fruit still green damaged by animals, but that’s usually young unschooled animals and they learn not to sample immature fruit again when they’re young. Humans pick still immature fruit and dump it when it doesn’t taste good. Unfortunately, lemons and limes never ripen after they have been picked. They must reach maturity and harvested while still clinging to the tree.

Lemons usually don’t ripen until about December. Ripening means the sugar content increases as they reach maturity. December and January are the usual times we see citrus damaged by vermin. Lemons can be harvested from the tree for about three or four weeks after they ripen and it’s still cold. If held too long on the tree, they become “pithy,” dry out and the rats can find better things to eat from the garden.

Harvest the remaining lemons no later than late January when they, hopefully, should still be at their peak of sweetness.

Q. You said in your column that you can grow citrus from seed. What is the best way to do that? Dry them first? Soak them?

A. I am talking about a sexual trait of many citrus seed called polyembryony. This trait is common among citrus seed. Polyembryonic seed in layman’s terms means they will grow the same fruit as the “mother” tree. In other words, if you want to grow a lemon or orange tree from seed, it will very likely produce the same fruit as the lemon or orange mother tree. Propagating citrus from seed means you have cloned the mother tree.

Cloning temperate fruit trees from the seed of apple, peach, apricot, plums and others is more risky. Cross pollination or hybridization between these types of trees is more common and the seed is not polyembryonic. Cloning of these trees is frequently done by cuttings or air layering (marcottage) rather than seed propagation. If fruit is seedless, then you are forced to propagate from cuttings or air layering. You have no choice.

To sprout citrus from seed, use fresh citrus fruit and remove any seed without damaging them. Wash and then dry the seed. Plant the seed in flats or large shallow containers in full sun using wet potting soil. Mist the soil about two or three times a week. The seed will produce shoots in two weeks if the soil stays warm. They are ready for moving into larger containers in four weeks. The worst failures from citrus are when planting frozen, old or dried out seed.

Q. Where in Las Vegas can I purchase calamansi limes?

A. Calamansi or calamondin limes are tart, small green limes with an orangish-yellow flesh. Mature trees are about 6 to 8 feet tall, a good size for containers. I have seen the plants occasionally at Seafood City, a Filipino grocery store. But you can grow them using fresh calamansi seed taken from the fruit.

Like most citrus, they will propagate true from seed. They can handle winter temperatures as low as 25 F when they are larger and established. Plant them with compost mixed in the soil as an amendment along with a 3-to-4-inch layer of wood chips on the soil surface (mulch) in an eastern part of the yard that is warm and out of the wind.

Q. When is the best time to fertilize roses? Are commercial fertilizer mixes OK to use?

A. Commercial rose food or granular fertilizer for roses is fine to use if the soil has been amended with compost in the past two to three years. Desert soils need the extra organic content for many plants. If the soil has not been improved during that time, then it’s best to either amend it so that it’s “fluffy” and then add a commercial fertilizer. An alternative is to use a rich compost that does both at the same time.

Be sure to cover the amended soil with wood chips, not rock. Don’t forget to add an iron fertilizer to the soil in late January and cover the soil with mulch afterwards.

Roses prefer the same soil amendments as citrus and other fruit trees. Fertilizer applications are done twice in the spring and twice in the fall, avoiding the high temperatures of the summer. Avoid applying fertilizer to roses during the heat and be sure there is at least six to eight weeks of good growth remaining during the growing season.

A good rose fertilizer is high in phosphorus and potassium but lower in nitrogen and usually in a slow-release form. Some rose fanciers like to apply magnesium in the form of Epsom salts as well.